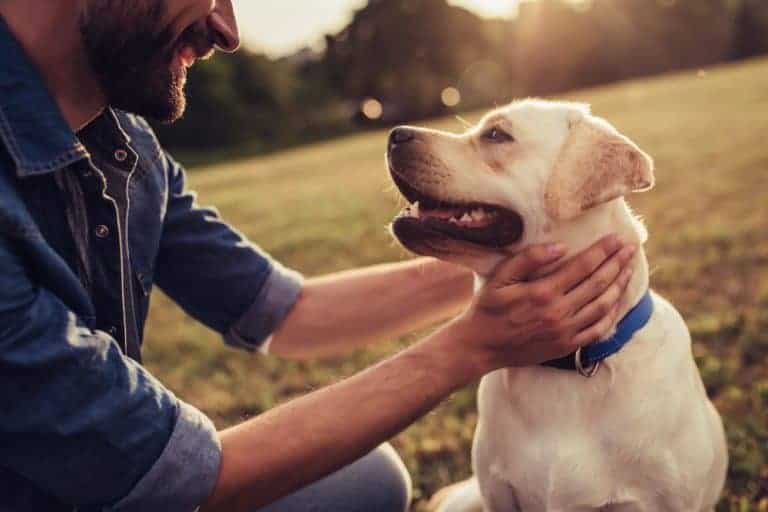 Owning a Labrador can be noisy business. And before you bring one home, you must know just how loud things are about to get.

Do Labradors bark a lot? How vocal are labs? To answer this frequently asked question, we did some searching and here’s what you need to know.

According to experts, Labradors DO NOT bark a lot! They are bred to be a calm, social, friendly species and by nature aren’t very noisy. Of course, they get vocal but that too is limited for communication purposes only. Once the requirement has been met, Labradors quieten down.

Although this is generally the case,  labs do tend to bark a lot in certain situations. Read on to know what these situations might be and how to tackle them.

Do Labradors Bark A Lot? (Video)

When Do Labradors Normally Bark?

Before you make up your mind about whether a Labrador barks a lot, you need to know about all the situations in which it is normal for Labs to bark.

A Labrador will normally bark when:

The most obvious and common scenario in which a Labrador barks is when he needs something. If your dog is hungry, thirsty or wanting to go to the loo, he will bark in order to notify you.

Labs are highly sensitive and deeply attached to their owners. This means that they constantly want YOUR attention. If you fail to give it to them, you bet they are going to bark! Such behavior, when prolonged is called the “acting out behavior.”

Labradors are basically big furballs of energy. They need constant mental and physical stimulation to channel all the energy they are filled up with. When the Labs don’t find such a channel, they get bored. And when they do, they will be sure to let you know.

Just like all other animals, Labradors also experience fear and anxiety. When faced with a fearful situation, Labs will bark as a defense mechanism. This bark is generally very easy to recognize as it is coupled with a timid body language.

5. He sees something unusual

Dogs bark at essentially anything that is out of the ordinary for them. This can include new people, new places or any other object. Since Labradors are also guard dogs, they bark at anything they find unusual in order to alert their owners about any possible intruders.

Labradors get very excited about little things. So, if you get your lab a new toy, get ready for some barking!

Labradors are incredibly sensitive by nature and experience separation anxiety during their owner’s absence. This is the reason that dogs often bark when they are left alone at home. 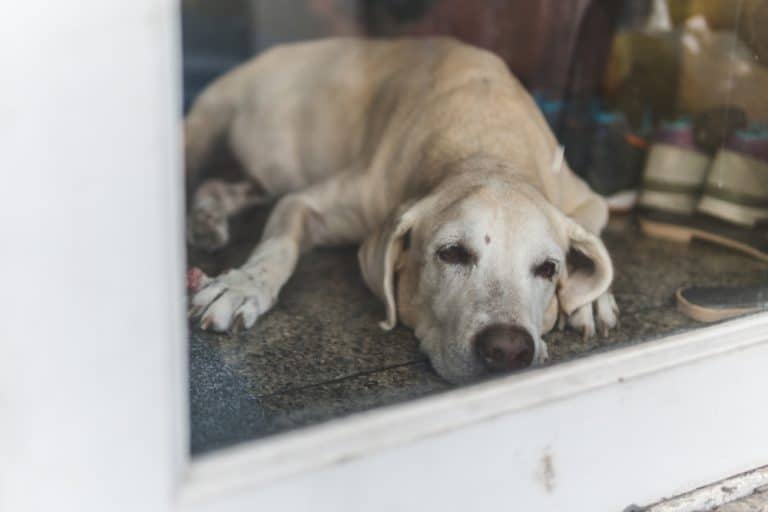 If your Labrador barks due to the reasons stated above, you need not worry. But,

There might not always be a legitimate reason for your Labrador to bark. Sometimes labs bark excessively.

But why? Let’s find out.

Why Do Labradors Bark A lot?

Just as humans speak, dogs bark as a means of communication. But sometimes, Labrador owners experience excessive barking by their dogs. This can be a very frustrating situation to be in for both the owners as well as the neighbors.

It is important to learn why nuisance barking may occur. According to our research, it is due to 3 main reasons listed below:

Labradors are very smart dogs. They quickly learn all the tactics they can use to get their demands fulfilled. This involves excessive barking, chewing on furniture, shoes and other irritable acts. Once the dog learns that by doing such things, he can get what he wants, he will repeat the same behavior and turn it into a habit. This is one of the most common reasons for excessive barking and requires a lot of patience to deal with.

One of the most embarrassing situations for a dog owner to be in is when your dog starts barking his head off at any and every stranger that he sees. Especially if the stranger is a child, an elderly or any other person minding his own business. This happens when Labradors develop the “passer-by syndrome.”

Dogs don’t particularly like strangers, so they bark at them. When the strangers go away due to the barking, dogs have an “aha!” moment in their heads. They learn that they can get rid of strangers by barking. This, of course, happens a lot on the streets. A stranger appears, the dog barks and poof! The stranger disappears. Each time this happens the barking behavior gets reinforced and turns into the “passer-by syndrome.”

Excessive barking, especially during the night time can be the worst nightmare for the dog owner as well as the neighbors. One study revealed that dogs barking is one of the most common causes of noise in a suburban neighborhood. But, as annoying as it may be, it can indicate some serious issues.

Senior dogs especially may bark excessively during the night due to pains or just because of the lack of company. Other times night time barking may be caused due to separation anxiety and boredom. Or, your dog might just bark like crazy during the night because he’s awake and wants to wake you up too! 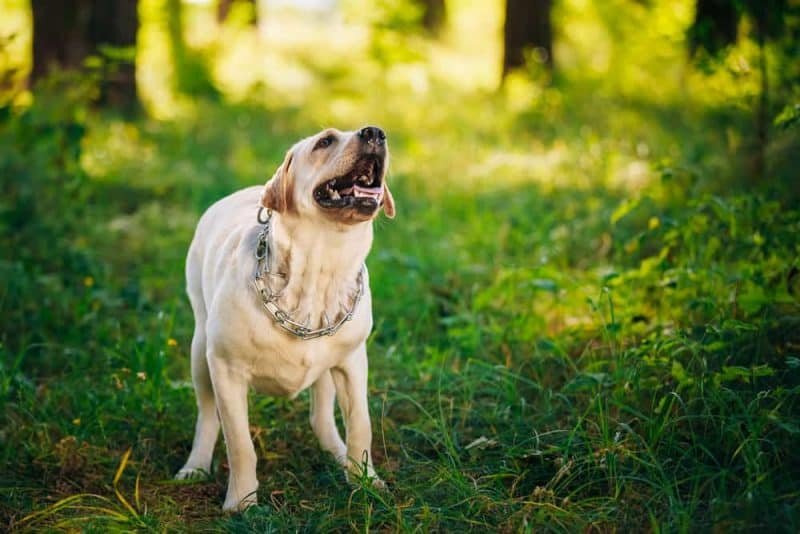 No matter what the reason for excessive barking, it can drive even the most dog-savvy person crazy. In such situations,

Once you’re calm you can start working on solving this problem. Read along to know how you can do so.

How To Train Labradors To Stop Barking Excessively?

The good news is:

Barking behavior can be corrected with training.

So, before you consider putting your extra barky Labrador up for adoption, here are all the techniques you need to try.

Labradors learn through reinforcement. This means that any time you cave into their demands when they bark, you are actually encouraging a problematic behavior. So, the first thing you need to do to break the demand barking habit is to start reinforcing silence.

Any time your Lab starts to bark excessively without any genuine reason, ignore him until he stops. You may need to get earplugs during the training period but you must not cave in! Once your Lab stops barking, give him a treat. This way the dog will learn that silence and discipline are the way to go!

Excessive barking in Labradors is often related to the lack of stimulation. These dogs get bored very easily and need constant entertainment. When they don’t have anything to do, they bark out of frustration. The best way to solve this problem is to make sure that your Lab is getting sufficient exercise and playtime. Research suggests that Labradors who are exercised for longer periods of time show less aggression. Which means you need to walk them every day. Aside from that, you also need to have toys around the house to ensure that your dog remains occupied when you’re busy and doesn’t start barking his lungs out!

Labradors get hyper anytime they see anything unusual. In order to make sure that your dog remains calm, you need to limit his access to anything that he might find out of the ordinary. Say for example you have windows that give your dog the visual access to “strangers.” You need to draw the curtains or shut the blinds. If your dog stays in the backyard, you need to build a fence so that he is unable to see the neighbors. Similarly, if you are taking the Labrador out for a walk, try taking him to a place that is less crowded. This technique is very helpful for resolving the passer-by syndrome in Labradors.

If a Labrador seems to be barking excessively despite having all his needs fulfilled, it may be wise to see a vet. Older dogs are especially prone to illness. Hence you need to eliminate any reasons to worry by taking your Labrador for a checkup. 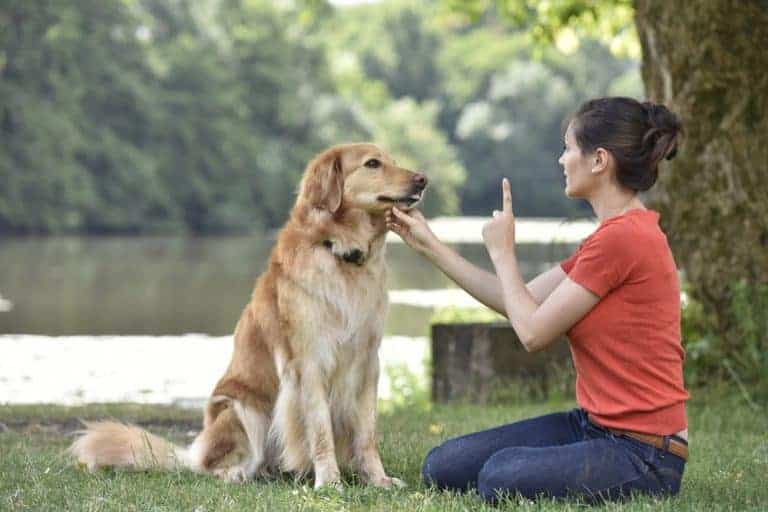 Whichever technique you choose to apply need to remember:

Now, that you know everything you need to do when your Labrador barks needlessly, let’s have a look at all the things you MUST NOT do.

What not to do when your Labrador barks a lot

When your Labrador’s barking keeps you up at night or drives you crazy during the day, even the calmest person tends to lose their cool. This, in turn, causes the owners to take desperate measures to resolve the problem.

It is crucial that you act smart.

Here is a list of all of the things you must never do to get your dog to barking.

As humans, we yell in order to get our voices heard. But that’s not how things work in the dog world. If you yell at a barking Labrador, he will think you are barking with them. This means instead of listening to what you’re saying, they will bark even more!

Some people use shock collar as a corrective therapy for barking problems. Although this punishment method may work, it is cruel to do so. And even after taking this extreme measure your dog may still continue to bark excessively. This happens because Labradors are more willing to accept the punishment than they are to stop barking. For dogs barking due to anxiety and fear, the shock collar can be extremely traumatizing.

The worst thing that a person can possibly do to a barky Labrador is to remove his vocal cords altogether. This really should not even be an option but sadly such procedures exist. Although this surgery is banned in most parts of the world, some vets may still do it.

A lot of times people pet their Labradors when they are barking uncontrollably in order to calm them down. However, the dog perceives this as a reward and in turn barks even more. So, next time your Labrador gets out of control, practice ignorance!

You may think that all Labradors do is bark, bark, bark. But that’s not true!

Labradors have many other ways of vocalizing themselves.

How Do Dogs Vocalize Themselves Aside From Barking

According to experts, vocalization is not in Labrador’s DNA. Yet, some Labs may be more “talkative.” Below are some of the ways your dog may try to communicate with you other than barking.

After barking, whining is one of the most common ways your Labrador might use to talk to you. This is more so the case for young pups but adult Labs may whine as well. Although whining is generally considered as a sign of distress, a dog may whine out of excitement as well

This is not very common in Labs, but your fellow might growl here there out of excitement. According to some dog owners, their Labradors also growl when they want to be taken outside. Thankfully these sounds are not very loud or annoying.

Some Labradors resort to whimpering when they see something unusual. Many dog parents say their Labs whimper whenever someone is at the door. But settle down once they feel secure.

Just as human beings, dogs also experience personality shifts over a period of time. So, Yes. A Labrador may start barking more as he grows older.

This could be due to increased anxiety, improper training or health issues.

Do Labradors bark out of aggression?

Labradors are bred to be calm, quiet species which means they are highly unlikely to bark out of aggression.

No, dogs do not cry. If you see your Lab shedding tears, rest assured they are not doing so out of sadness.

Labradors are popular for their kind nature and loving temperant. They generally exhibit good behavior. However, some Labs may require training to do so.