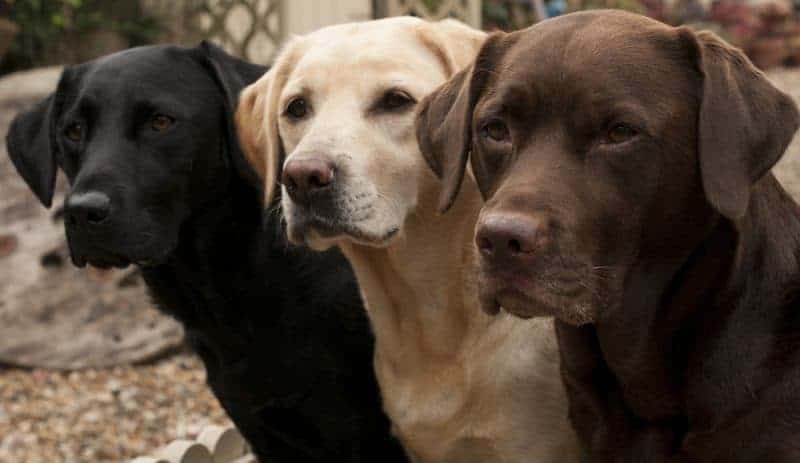 Labrador retrievers are consistently ranked as one of the most popular breeds among pet owners. And it’s pretty obvious why they’re everyone’s favorite! They’re cute, cuddly, incredibly smart, and best of all, very friendly. Think Labrador, and close your eyes. What’s the first thing you visualize? I see a golden ball of fluff, wagging its tail, tongue hanging out, showering me with unconditional love. For the most part, that’s exactly what Labradors are; 30 kilos of pure, unadulterated love. Ever wondered if a Lab is capable of aggression? Do they get aggressive? Do they ever attack? I looked up the answers to all these questions, so you don’t have to.

So, what’s the verdict?

Labradors are generally not aggressive. In fact, research suggests that they are one of the least aggressive dog breeds. Originally bred as retrievers, and later as family dogs, they have a generally calm and friendly temperament. However, there is a difference in being aggressive and being capable of becoming aggressive.

Having said that, in order to answer the latter question, it is important to look at the general characteristics of Labradors. We will explore their background, temperament, predictability, and any potential triggers that can make them aggressive. We will also look at how a dog’s pedigree and training can affect the way he behaves.

Where do Labradors come from?

Labradors were introduced in the Great Britain as early as the 1800s through trading ships from Canada. The dog is closely related to the now-extinct St. John’s water dog, also famous for its fishing skills and friendly demeanor, just like the Labrador. The earliest recorded Labradors were all black, with the golden and brown varieties appearing much later.

Although it originated in Newfoundland, the breed became quickly popular in Great Britain. Today, we have English as well as American varieties of Labradors. While these two have subtle differences in their bodies as well as temperaments, they are not recognized as two separate breeds. English Labradors are generally considered to be more friendly and docile.

Yes, they are. Labradors are used as guide dogs for the visually impaired, and are the first choice as therapy dogs. They are used for screening drugs by law enforcement agencies. To me, this is definite enough that you can always count on a well trained Labrador.

Are all Labradors predictable? If you’re referring to colors, then yes, they’re all predictable. But if you’re asking this as a general question, well, it’s not that simple. Dogs, just like humans, have individual personalities. The training and environment they are provided with obviously affect them the same way it affects us.

Do Labradors have anger issues?

Generally, no. Labradors are known for their calm and cool temperament. They are not impulsive. The American Kennel Club (AKC) describes Labradors as “friendly, outgoing and high spirited”. There are certain dog breeds that may get agitated for no apparent reason, but Labradors are certainly not one of them.

Can Labradors get aggressive?

As I said earlier, animals have their individual personalities just like humans. They do experience a variety of emotions, including happiness, sadness, and anger. Ergo, Labradors definitely can get angry. It is important for every dog owner to be aware of the nature of their dog. They must be able to tell when the dog is being placed out of their comfort zone. And it’s really not that difficult to tell that either. You just have to watch out for some cues.

What cues will your Lab give if he’s getting angry?

There are certain telltale signs that your dog is upset. These include them turning their head repeatedly, yawning, licking their nose, or simply trying to get away from the trigger. They may even have dilated pupils and wide-open eyes. Now, if you notice any of these signs, take control of the situation.

When we are in a threatening situation, our instinct is to either fight or retreat. It’s the same with your dogs. If you don’t remove the threat or get them away, they will ultimately put up a fight in their defense. This is why it is important to always keep a keen eye on them. You’d do the same for your kids, you know.

Why are postmen attacked by Labradors so frequently?

While researching this topic, I came across several news reports of Labradors commonly attacking mailmen. Interestingly, even overall, men are more likely to be attacked than women. Coincidence? I think not.

It’s not like your dog inevitably sees a postman as an enemy. It has nothing to do with being a Labrador either. Labradors would see any unfamiliar figure coming uncomfortably close as a potential threat. Unfortunately, a postman’s job puts him in that vulnerable position. When they get too close to your dog’s ‘territory’ they are seen as a threat and attacked. Why are men attacked more frequently than women? Well, men are more likely to show an aggressive reaction than women and are more likely to be seen as threats.

Are there other things that can trigger aggression?

There can be many reasons why a Labrador may suddenly begin exhibiting aggression. Let’s talk about each of them one by one

I have been emphasizing throughout that there is no “one size fits all” formula that can be applied to dogs. Although each breed has certain characteristic traits, individual variations do exist. Many people consider Labradors to be desirable as pets because of their amicable nature. But anyone who wants to have a pet must realize that it requires serious commitment. In many ways, having a dog is very similar to having a child. While all babies are universally considered adorable, no two will ever be the same.

Some Labradors, including the one you were lucky enough to adopt, might just be more reactive than others. It might not be because of the triggers we have discussed. It might not even be an abnormal thing. Your dog may just be reactive by nature.

Does pedigree have anything to do with how my Labrador behaves?

The answer to this question is, yes. Several pieces of research have established a link between aggression and genetic makeup. Just like in humans, mental illness and neurotransmitter imbalance exists in dogs as well. Some experts recommend that it may be a good idea to meet with a dog’s parents before you decide to adopt it. If mum seems unusually fierce, maybe you should reconsider your decision to adopt one of her babies.

Does training have a significant impact on a Labrador’s temperament?

It is now a well-established fact that nature and nurture both play vital roles in how an individual intimately turns out to be, and the same applies to your dog as well. Dogs, by nature, are social animals. When they are adopted into a family, to them it is like becoming part of a pack.

When a young dog is being trained, it is easy for an expert to teach it to behave and obey. If, however, a dog has never been provided with a comfortable environment, they are bound to have behavioral issues. In such instances, expecting a dog who has endured years of neglect or abuse to come around with just a few weeks of training is unrealistic. Dogs, in general, and Labradors, in particular, are high maintenance pets. They need lots of love, attention, regular walks, an open space, and a healthy environment to stay happy. If you haven’t provided your dog with these conditions, he will get stressed. Over the years, such dogs become conditioned to remain aggressive and on edge, are unlikely to change this behavior.

Perhaps the most alarming situation is when a previously well-behaved dog suddenly starts growling and barking excessively. In such instances, any potential triggers must be identified and removed if possible. If the change in behavior is because of a new pet, a new house, or any other factors that cannot be eliminated, retraining may help the dog adjust and cope with the changes.

So, what is the final verdict?

The final verdict is that Labradors are one of the most reliable and least aggressive dog breeds. That being said, there are a few things that we must always keep in mind

In summary, Labradors are amazing creatures. They are incredibly smart and loving. It is very rare and atypical for one to turn out to be aggressive. When one is acting in an unusual way, it may not be its fault. If I were to give a simple, one-line answer to the two title questions.

Are Labradors aggressive? No, they are generally not.

Do Labradors ever attack? They most certainly do, but not because they are nasty or aggressive.