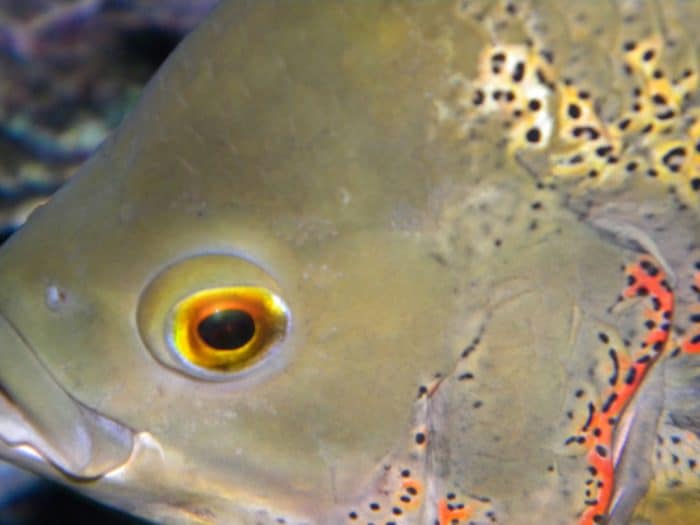 As fish lives, moves, eats and consumes energy it surely must need to take a nap too, right? It is hard for us humans to tell whether a fish, in this particular case Oscar fish, sleeps or not.

Do Oscar Fish sleep? Yes! You have to observe the Oscar’s behaviour to know whether it is sleeping or not because fish, in general, do not have their eyes closed while sleeping. If Oscar does not respond to your gestures, it means that it is sleeping.

Fish have different behavior depending on the time, age, environment, and type.

So, how do They Sleep?

A clear sign a creature is asleep is their eyes being closed.

But fish never close their eyes this way. They have neither eyelids to shut their eyes nor do they have a neocortex, which activates a certain electrical activity in the brain for sleeping.

Regardless, they take the occasional nap. It is not the same sleeping behaviour, though. It resembles more of an energy-saving mode. If you imagine a digital device and you need to save battery you set it on an energy saving mode, but it is still on.

The “siesta” of a fish is as such rather than an unconscious deep sleep-state. You will find in the Merriam-Webster dictionary that sleep is defined as ‘the natural periodic suspension of consciousness during which the powers of the body are restored.’ The Oscar fish “goes to bed” at night, it withdraws to hidden places such as corners, behind rocks or at the bottom of the fish tank. This is a common behaviour all cichlids fish have (the Oscar fish is one type of the cichlids family).

A trick to see if the fish is really resting is moving up close to it. If the fish is trained to follow your signals and react to certain movements, like trained dogs, it probably reacts when you are going to feed it or not, if the gestures do not provoke a reaction, the fish is power-saving.

The Oscar fish prefers having lots of free space of its own. This is also a critical point when the fish grows, because Oscar fish can become very big and this will eventually leave the tank overfilled.

The Oscar fish is, additionally, a very spirited creature; it is playful and is like a hyperactive wild child. It is aggressive when it plays and if it is a more active one, the games easily turn into bullying other fish.

Some may experience that if there are more tank mates in the aquarium, the Oscar fish can get rather aggressive and play too violently even during night hours when it is supposed to sleep.

Always bear in mind that Oscar fish can grow into becoming really huge and if the tank is small for their size, they might fight for occupying more space, disrupting its sleep patterns and disturbing your sleep as well…

But the fish is also frailer to other larger and/or more dangerous species, predators that feed on the Oscar fish. A fine example is the Catfish.

In the Head of the Fish

Instead of examining brain activity for sleep patterns as scientists and doctors do when it comes to human patients, an alternate approach is to examine any rest and activity cycles that might indicate ‘behavioural sleep’, meaning how they act during their sleep.

The following four behavioural criteria are characteristic of sleep in birds and mammals and could be applied on fish as well:

Based on these criteria, many fish species have been observed sleeping. But others have been classified as non-sleeping fish. As is the case with some sharks and tuna.

They keep swimming around continuously and no signs of sleep have been observed. The reason why these fish do not sleep? One function of sleeping is allowing, in particular, the brain to merge into memory all the signals and things it has picked up during daytime or when it was up.

A flow of new information constantly will interrupt this process. This is a process when there is a lot of stimulation and activity going on in the waters. But if the environment lacks this activity, the fish does not require any sleep as it has no input to the process.

We have already acknowledged that the Oscar fish is active and can even at times, very aggressive, so there is a lot of action surrounding it.

Consequently, it has an urge to sleep to regain its strength and recharge, regardless of the lack of eyelids and necocortex.

Stating the obvious: Fish do not have a regular bed as humans do. No pillows, sheets or beds. They can be nocturnal animals too, and have an urge to move when they are sleeping – we do not see humans walking around during sleep for a necessary healthy purpose (here we ignore those who have psychological sleep walking behaviour).

The movement could be stretched to merely their fins. Keeping a constant water flow through their gills is an absolute necessity for their breathing mechanism; it keeps a steady oxygen level.

Nonetheless, some fish actually, however remarkable it may sound, have pillows! They produce and fold them on their own. The fish produces a slimy liquid substance much alike mucus and uses it the same way we humans use pillows. Cosy indeed!

Other fish hover in corals or dig up holes in the ground to rest. The reason why they do that is they need to refrain from and be invisible to predators. Oscars can easily be eaten by larger nocturnal fish, like the Catfish, so it withdraws to a corner or the bottom of the fish tank.

Does the Oscar fish have other sleeping routines? Like humans, it has shown behavioral reactions to stress, which is a result of too much input and impressions, and how it furthermore relieves itself by taking a nap.

Can Oscar fish be calm too? There are calm ones and active ones. It is relevant you find out if your fish is calm or active so you can notice when it behaves differently because there can be something wrong with it. Map out how your pet behaves during different times of the day and how they respond to all kinds of signals; dinner time, playtime, while sleeping, etc.