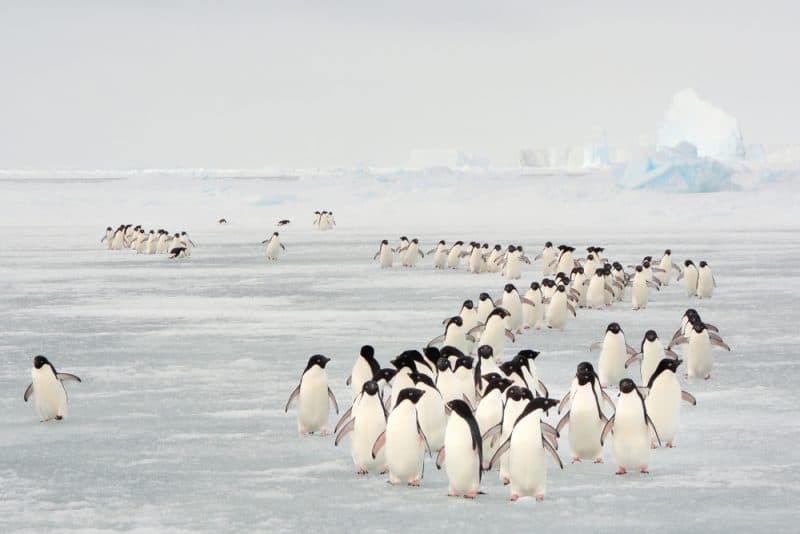 Penguins can be found in the Southern Hemisphere, and most of them have to live in freezing temperatures.

Only these magnificent creatures have the ability to survive in a place where not many can even think about going.

The question is: How do they survive?

Do Penguins hibernate? Where do Penguins go in the winter? No penguins do not hibernate, and during the winter months, they nest and breed in islands surrounding Antarctica. Penguins have adapted themselves to the cold climate, and their unique bodies help them to survive in such harsh conditions.

Why do Penguins Migrate?

There are many factors that lead to the migration of penguins. The changes in food availability, changes in temperature, and the need to mate plus many other factors force penguins to move to other areas.

In terms of zoology, migration refers to the periodic journey that animals do from time to time, in order to reach areas where their needs are fulfilled.

Emperor Penguins are actually the largest Penguin species out there, and they are definitely a sight to behold. These beautiful creatures are the stars of the movie “Happy Feet.” Emperor Penguins live in the Antarctic, and their bodies help them to survive in the harsh winter months.

Emperor Penguin migrations are a glorious sight, and this migration takes place in each austral autumn during March from the coast to the inland across the thick sea of ice, over a distance of about 100 miles.

This migration has been done by penguins for decades, and each year the pattern is repeated. This ritual allows the Penguins to move from place to place in order to fulfill their survival needs. Just like the birds that fly south during the winter, the penguins migrate too.

The primitive instincts of the penguins kick in during the same time, and large colonies begin to migrate and claim ground together. This is actually a migration to the breeding grounds. The female penguins, after making this long journey, mate with the males, lay their eggs, and then set off to sea to hunt and feed during the winter months.

The egg is passed to the male penguin, who then takes care of the eggs until they hatch. Females tend to go for chubbier mates as that ensures the survival of their chick. The males do not eat till the female returns and survive on their own fat. The males incubate the eggs and protect them from the freezing temperatures of the Antarctic, as well as harsh winds that can roar up to 100 miles per hour. The penguins protect themselves by huddling together in large groups.

The chicks then hatch during the month of August, and the male penguins provide them with a curd-like food from their oesophagi in order to keep the chick sustained for about two weeks. When the sun begins to shine, the females head back to their chicks, and then the male penguin goes out to sea. This back and forth trips to the sea lasts for a couple of months until the chick is big enough to venture on its own.

The surprising thing in all this is that the parents manage to find their own chicks in a crowd of thousands. The penguins only feed their own chick. The males locate their babies by listening to their distinct calls. When December arrives, the chicks are old enough to go with their parents to the sea, and that’s where they learn to swim for their own food.

The chicks stay at the breeding ground until they are about 4 to 5 years in age, and then they migrate just like their parents did before. Once they find mates, they begin their migration. Scientists are still puzzled at how the penguins find their way during the migration every year.

How do Penguins Survive the Winter Months?

Penguins have a magnificent body structure, which helps them to survive in the harsh climate of the Antarctic.

Penguins do not have fur, but they do have feathers. The feathers are short and sleek, and they overlap and form a tight-knit over the body of the penguin. The overlapping feathers protect the penguins from water and wind penetration. The feathers help the penguins to become waterproof, which is actually rather vital for their survival in waters that can be as cold as -2.1 degrees Celsius in the Antarctic. The feathers also help to trap air. The trapped air helps to provide insulation and also buoyancy in the water. The amazing thing about this layer of trapped air is that it gets compressed during dives and can dissipate after a prolonged dive.

Another thing that penguins do is that they huddle up in groups that help them stay warm. The chicks are kept in the middle for maximum protection against the cold and the winds. Penguins live in huge colonies, and some of them can grow to contain 20 million penguins or more.

Penguins also have black colored feathers at their backs, which help them to absorb heat from the sun, so this helps to keep them warm.

How far do penguins travel?

This actually depends on the extent of the icepack. Female penguins have to travel about 50 miles in order to reach the open sea, where they hunt for fish, krill, and squids. In the sea. Penguins can dive to about 1,850 feet and stay under the water for around 20 minutes.

How long can penguins live?

What is a group of penguins called?

Over a million penguins gather to migrate from Argentine peninsula
(Video)

Contents show
Why do Penguins Migrate?
Emperor Penguin Migration(Video)
How do Penguins Survive the Winter Months?
Other Penguin Facts
FAQs
Over a million penguins gather to migrate from Argentine peninsula (Video)