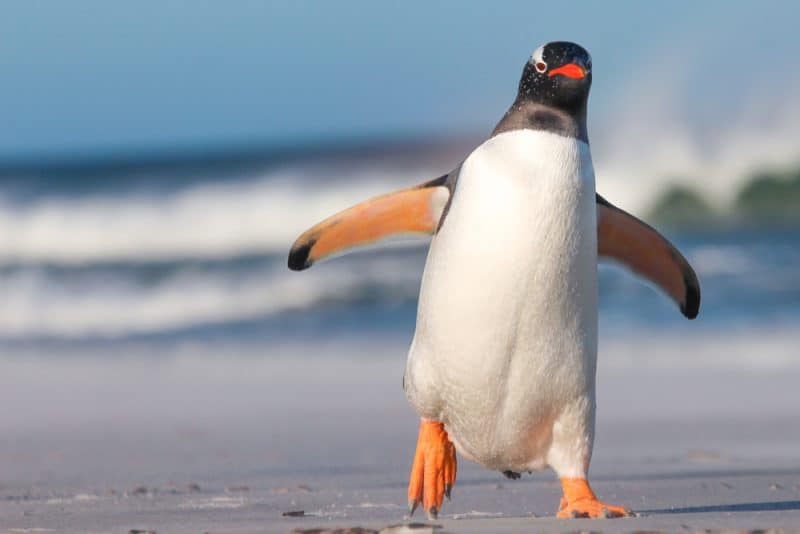 Those cute, cuddly creatures of the arctic have fans all around the world.

But the question is: How much do you really know about penguins?

Let’s find out more, together!

Do Penguins Have Knees, Elbows, Ears, Fur, Teeth, Tails, Breasts? Penguins do have knees, elbows, ears, and tails but instead of fur, they have feathers and no breasts. In addition to all this, they have a streamlined body that helps them propel easily in the water.

Continue reading to know more about the anatomy of these cuddly creatures. 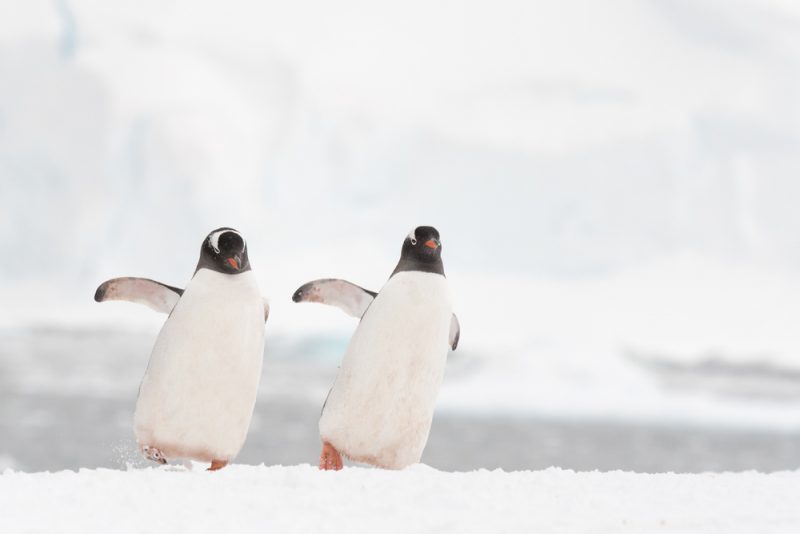 Penguins are beautiful creatures with a rather unique and interesting body structure. Their bodies and streamlined and are designed in a way that helps them to easily swim in the water. Penguins are way faster in water than they are on land; this is because they lack limbs that can easily support their body weight. This is why penguins just wobble across large distances at a super slow pace.

Most penguin species are found in the colder regions of the planet and so they need a body that helps them stay warm in freezing temperatures. Their body is covered with blubber, which is a thick layer for fat which helps to keep penguins warm in harsh climates.

Penguins also have overlapping feathers that make wind or water penetration nearly impossible. The feathers provide waterproofing which is crucial for the survival of the penguins in waters as cold as -2.2 degrees Celsius in the Antarctic. The tufts of down on feather shafts also help to trap air. The trapped layer of air actually helps to provide 80 to 84 percent of the thermal insulation that penguins need. The amazing thing about this trapped air is that it gets compressed during dives and can dissipate after prolonged diving. Penguins also tend to rearrange their feathers by preening.

Do Penguins Have Knees? (Video)

Related Articles: Do Penguins love only once?

Most penguins are black and white in color, with the white being on their front and the black on the rear. This color scheme helps penguins camouflaged in the water from top to bottom. The dark color on their rear helps them to hide from predators above them and the white belly makes it difficult for the predators below them to spot these cunning creatures.

Baby penguins are much different as compared to adult penguins when it comes to their appearance. They chicks are covered with brown or slate-blue feathers and are smaller in size in contrast to mature penguins. The most unusual color marking is found on the macaroni and rockhopper penguins, they have orange or yellow feathers above their eyes, which make them seem rather comedic.

Penguins cannot fly and so their wings are much different as compared to other birds. Their wings are known as flippers, penguins use these unique structures to help them swim underwater. The flippers are covered in short feathers and are tapered and flat in shape.

Do penguins have teeth? (Video)

Related: Do Penguins Mate for life? 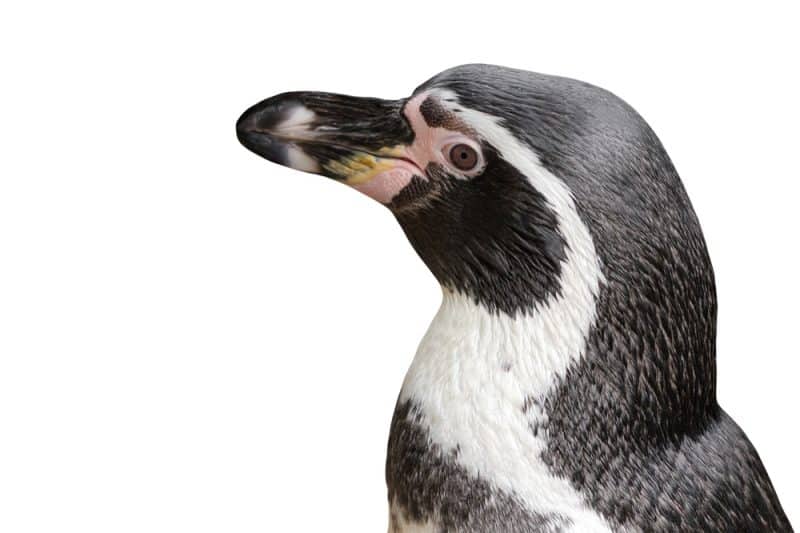 Most penguin species have a small head that is set upon a short neck and they have small eyes with round pupils, in addition to they also have a third eyelid. This third eyelid helps penguins to see during a snowstorm, it also protects their eyes. A similar third eyelid can be found in camels, as they need protection from the sand storms they encounter in deserts. The third eyelid provides the same function for both the animal’s species.  The penguins also have great vision, even when they are swimming in the water.

Penguins also have bags under their eyes that help them to secrete salt water. This allows the penguins to eliminate the excess salt water in their body. The salt tears form droplets on their bills and are then shaken off. This is so safe for penguins that they can even drink sea water and not get sick.

The bills of penguins actually range in size and shape. It really depends on the diet of the penguin specie compromises. Penguins that consume fish, squids, and crustaceans have long and thin bills. While the penguin species that feed on krill most of the time have a bill that is a bit shorter as well as wider. Inside the mouth of the penguin, they have rear-facing spines that help them to digest food with ease, while it’s alive.

Penguins have ears that are present on each side of their head, but keep in mind that they do not have external ear flaps like humans or mammals. Their years are just holes in their skull that are covered with feathers. Penguins require a body shape that is streamlined so that they can easily swim in the water, the lack of external ear flaps help them to attain that shape and minimized drag as they swim through the water.

These unique ears allow them to hear very well, and it is just surprising how parents can chick can identify each other in huge colonies with thousands of penguins, just by the sounds that they make.

Penguins have short tails that are wedged in shape, with around 14 to 18 stiff tail feathers. There are some penguin species such as the Adelia and Gentoo penguins, that have tails that have longer feathers, which they mostly use to prop themselves up. All the penguins use their tails to steer themselves and break the water. Penguins also use their tails in order to maintain their balance when they wobble across distances.

The body of penguins is covered with short, waterproof feathers that also interlock. The movement of the feathers is controlled by the muscles, holding them tight to the body when swimming and out when the penguins are on land in order to trap air next to the skin.

All penguins tend to molt, which means that they shed their feathers, at the very least once a year. Most penguin species go through the molting process at the end of the breeding season. This is an amazing process and actually helps to keep the feathers of the penguin in a good condition. Over time, the feathers tend to rub together so much that they become dirty and do not have enough oil. 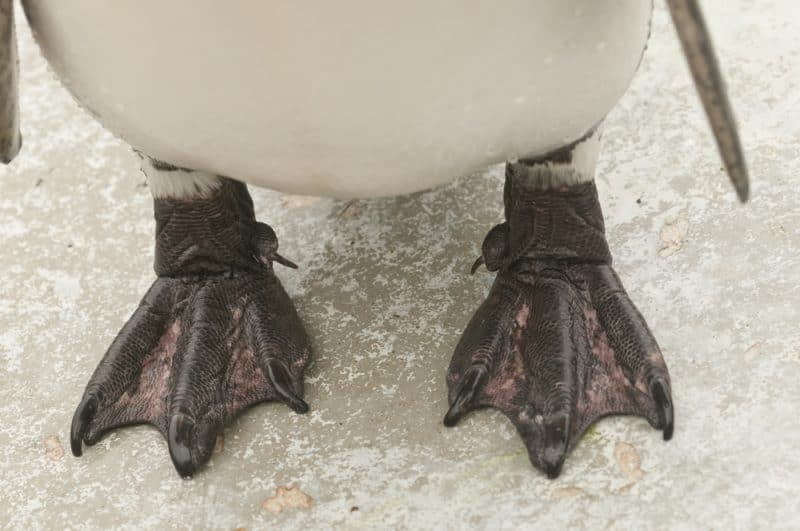 All kinds of penguins have rather short legs and webbed feet, which allow the penguins to step or hop around the land and also easily, swim in the water. The webbed feet help the penguins to propel comfortably through the water and they are also equipped with claws that enable to them to capture fish to eat.

How are penguins’ feet adapted to the cold?

Penguins have a body structure that allows them to stay warm in the harsh climate. Warm blood actually flows to the feet of the penguins, and this helps keep their feet warm at temperatures just above freezing.

Which is the largest penguin species?

The Emperor Penguin is the largest living Penguin species. Adults are about 1.1 m in height and they weight around 35 kg on average.

Which is the smallest penguin species?

The smallest living Penguin species is the little blue penguin which is also called the fairy penguin. An adult fairy penguin is about 40 cm in height and weighs around 1 kg.

What does a penguin eat?

The diet of a Penguin consists of seafood. They mainly feed on fish, and some penguins even eat squids, krill and crustaceans.

Do Penguins have teeth?

No penguins do not have teeth, instead they have fleshy spines inside their mouth that help them swallow fish. The protrusions tend to face backward and they help guide the fish down the penguin’s throat.