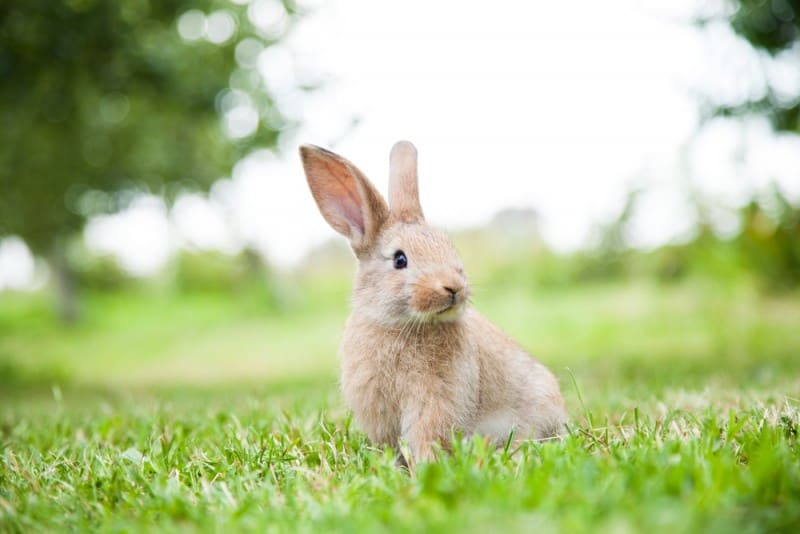 Have you ever wondered if rabbits could make sound?

I mean, yes, they are known for being quiet and all, but they must be making some kind of sounds to show their love or anger or just communicate right?

Like all other animals, rabbits also make different sounds to show their emotions. But their sound is so soft that you’ll have to hold them up close to your ears and listen to them. The sounds that rabbits make can be defined as soft ‘purring’ or ‘squeaking’ or a ‘clucking’ sound, depending on how they’re feeling.

Can Bunnies Bark?! YES! The Truth About Rabbits

But why and when do rabbits make these sounds? And what do they mean?

Keep on reading below to get the answer:

Do rabbits make any sounds?

Surprisingly, yes! Rabbits are known to be very quiet animals and normally use their body language to communicate. However, they can also make noises, but you’ll have to listen to them really carefully because their sound is quite soft. Even if there is a little noise in the background, it’ll be near impossible to hear your rabbit.

Furthermore, you would hardly ever find rabbits making any kind of noise because they spend most of their time being quiet and talking through their body language only. But if you spend a little bit more time with them and focus on them, you’ll be surprised to know the different sounds they make and how vocal they can be with you.

Do you want to listen to a rabbit? Then click the link below.

Tip: Put on your headphones.

What sounds to rabbit’s make?

After finding out that rabbits can make different sounds, I’m sure you’d want to know the types of sounds they can make and what do those sounds actually mean.

Even though it’s one of the most common sounds rabbits make, you’ll have to listen to them very carefully so that you’re able to distinguish their happy/excited squeak and their scared squeak.

If the squeak is high-pitched, it’s most probably because they are very happy, maybe because they saw food coming or they just got excited while playing.

But if the sound of a rabbit’s squeak is deep and low in pitch, it means that they are in some serious trouble or some kind of danger. This squeak could mean:

In such a squeak, you should immediately check for any bruises or injuries on your rabbit and take them to a vet to get them thoroughly checked. If there is no injury and they are scared, sit close to them and hold them up close for some time, so that they can relax and get comfortable again.

Try to find out reasons for such squeaking and make sure there are no predators around them which can cause such a reaction again.

No matter how cute and innocent rabbits look, they too can get angry. Rabbits would make this sound when they are furious and angry because of something and want no one around.

If you try to get around them after hearing the growl, chances are that you’ll end up getting hurt, because the growl is a sign of a rabbit that is about to attack you.

So instead of invading their space, leave them alone and give them time to calm down on their own.

This is the sound rabbits would make when they mate. If they live with a rabbit of the opposite sex or have one around them, this sound will mean that they are trying to attract the other gender and want to mate.

This is a sound of pure bliss. This means that your rabbit is very happy with everything and is enjoying the food to its fullest.

If you’ve never heard your rabbit make a clucking sound, try getting them this Kaytee chewing toy from chewy to make them happy and make happy sounds!

Yes, just like cats, rabbits also purr to show their happiness and contentment with the owner. Their purring is caused by rubbing their teeth and is such a soft sound that you’d want to hear it once for sure.

They’ll usually make such a sound when you’re either patting them or caressing their hair.

Listen to this video and you’ll be able to identify it the next time you cuddle up with your rabbit.

Don’t forget to put on your headphones.

Yes, rabbits may whine. They’ll whine when they are not interested in being held up or being in the cage with other rabbits. It’s basically a kind of protest against the cage and its environment.

Hissing actually sounds just like it’s pronunciation. A hissing sound is made by rabbits when they are trying to shoo away other rabbits in order to protect their area and their territory.

If a rabbit is grinding its teeth, this means that your rabbit is in pain you must consult a vet immediately.

When rabbits try to attract rabbits of other sex and try to woo them, they make a humming sound.

A rabbit would make this sound when they have dust up their nose, or there is a strong scent near or just before they start grinding their teeth.

Why do rabbits scream when they die?

What does it mean when a rabbit licks you?

This clearly means that they are trying to show you affection and may want you to return it to them as well by petting them or rubbing their hair or something.

Can a rabbit die of loneliness?

Yes! There have been multiple cases reported where rabbits die when their friends or their partners die. Death of another rabbit causes them to get depressed and stressed which leads to their death.

What does it mean when a rabbit lays on its side?

A sideways laying rabbit is a happy rabbit. When rabbits are happy and content, they may lay on their sides or even on their backs. They may roll their eyes as well, so much that the whites would be only visible.

Do rabbits get attached to their owners?

Just like any other pet, rabbits can get attached to their owners as well.

So, to conclude the discussion, make sure to spend some real up close and personal time with your rabbits so that you can hear them talk. If you spend some quality time with them, they’ll vocalize with you and tell you how they feel.

Once you understand the difference between the different sounds, be sure to react accordingly, so that you’re the best owner to your rabbit that you can be.

I hope that you’re better able to understand your rabbit and it’s sounds after going through this article!