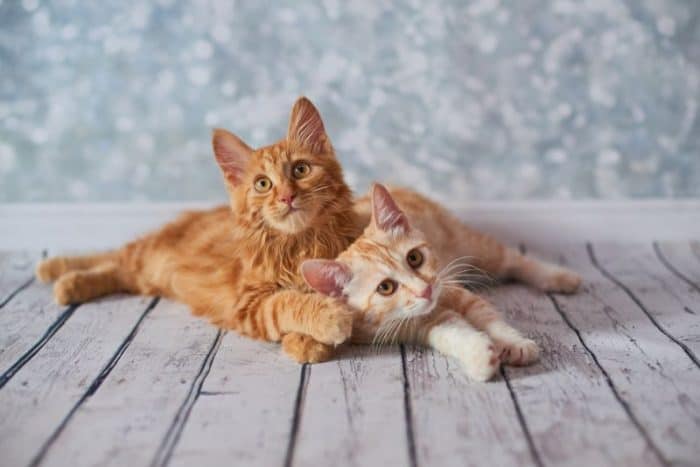 American bobtail cat is a rare breed and is also extremely cute, intelligent, and has become an obsession for pet lovers. The noticeable features of this breed include:

These cats don’t tend to face much health problems, you’ve just got to feed them right. If we talk about the care of bobtail cats, then bobtails also require the same attention and care that every other cat does. There are no special instructions to be followed in this regard. However, their litter should be clean as they are way too much concerned about their litter’s hygiene.

They are very friendly and safe for your kids as well. Make sure your child doesn’t hurt the cat either intentionally or unintentionally. If you avoid that, you don’t have to worry about leaving your child with the bobtail to play for hours.

1) They differ from Manx and Japanese bobtails

2) They have a wild appearance

American bobtail cats have a wild and tempered look which makes many people think that these cats are short-tempered.

However, in reality, bobtails cats are just opposite to what they look like:

They are super friendly in nature and never irritate or annoy anyone. So, don’t get confused with their appearance and imagine that your bobtail must have come back after catching some prey. Bobtails also resemble their cousin breed known as “Lynx” to some extent in physical appearance.

3) Known as a therapy cat breed

Having a friendly nature is one of the best facts about bobtail cats. These cats love spending time with humans and other pets; even with the cat-friendly dogs. This breed is loved even more for the way it adjusts itself with other pets, humans and their children. They love to play with slightly older children of the age 8 and above. You and your children would spend hours playing with them without even realizing.

All of the aforementioned facts make this breed a therapeutic one.

A great example of American bobtail cat being used as a “therapy cat” is:

Some specialists have started using this method in their medical centers to help their patients in releasing some stress prior to the surgery or other big treatments by letting them pass some of their time with this little package of joy.

Some other people play with this cat to overcome a dark phase that they might be experiencing and need some smiles and joy in their life.

4) Bobtails are attracted to gold and silver

This might be an interesting fact for some, but can also be dangerous on many levels.

However, this unique quality of bobtail cats is praised by most of the pet lovers.

This can be very useful if, for example:

You lose your precious silver or gold shiny pendant, earring or a ring. Then there is a possibility that your pet Bobtail might find it and bring it to you.

Whereas it can be dangerous or bad if:

You keep any of your precious gold or silver stuff on your bedside table or a place where your cat can easily reach. You never know when it might want to pop it on its own finger and click a few selfies y’know!

These American Bobtail cats have short tails which makes them much cuter and adorable. The short tails are created through cross-breeding with two different kinds of cats that are: Siamese and, as many Urban legends suggest, domesticated tabby cats.

The breeding results in a special kind of genetic mutation and the tail length of the mutated American Bobtail cat is reduced to 1/3 or 1/2 of the length of a normal cat’s.

6) They have a slanted stance

Wild bobcats have slightly longer hind legs than the front legs and so does an American Bobtail cat. This inequality in the length of the legs creates a slanting stance for the bobtails which makes them look as if they are crouching.

However, these cats are very smart and can find their way easily out of any situation. This is why they have been named as: “Harry Houdini” amid the entire cat community.

People are drooling over this cat breed because of the amazing and pleasing characteristics it possesses such as:

If you are looking for a cat which has all of these features, then American bobtail cat is surely your way to go.

8) They are very loyal

Usually, cats aren’t considered to be loyal enough with their owners, but these cute American Bobtails have this quality of exceptional loyalty with their owners and that is what makes them one of a kind.

9) They have a variety of patterns, eye color, and fur shades

This charming cat breed has a great variety when it comes to natural patterns, eye color, and fur shades.

Bobtail cats are generally medium in size and have their body covered with soft wooly hair. Some cats have short hair while some have medium-long hair length.

When you go to the pet store in search of these cats, you would observe these cats in almost all the possible natural shades and each of it is an attractive one.

You would see bold as well as soft colors such as black, brown, red, blue, lilac, cream, and cinnamon-shaded fur.

If we talk about eye color, it also varies from blue to brown and green, etc. Furthermore, adding to the natural patterns, some bobtail cats have scattered patches of darker color on a lighter base or vice versa while some are plain, single-colored having no patterns.

You might have heard it from someone that their cat loves a car ride.

This is one of the unique and interesting facts about bobtail cats that they have an outgoing nature which is why they love and enjoy their car rides.

However, they need to be trained to behave like a sophisticated passenger at their younger age so that they don’t disturb other passengers and the driver. Another characteristic that makes these cats a favorite among pet lovers is their friendly nature.

Even after the acceptance of American Bobtail cats from the Cat Fanciers’ Association or CFA, this breed is still considered to be very rare.

According to the researches and previous records, amongst the 43 renowned cat breeds, Bobtail rests at the 37th most demanding and popular cat breed in the United States of America.

Because this breed is extremely rare and containing great qualities, its price is high as compared to many of the other cats.

Having a friendly nature is what makes this breed a favorite for the kids and their parents as well. Parents are very concerned about their children when it comes to playing with a pet because of concerns related to allergies but bobtail cat is nothing to be afraid of because of the key features:

Another important and interesting fact is that American bobtail is a new breed, and no one knows when and where this breed came from. In 1970, they got the name “American Bobtail” from IAMS which, after a long time, started to get accepted by different cat associations.

However, they got complete championship status from CFA (Cat Fanciers’ Association) in the year 2006.

American bobtails cats are no doubt a bundle of joy and relief for everyone and a source of spreading smiles to those in need.

What to feed American bobtail cats? American bobtails are different from other canines. They need to consume a lot of meat to fulfill their protein requirements. However, they are a part of your family once you start to pet them so it is important for you to take good care of their nutritional requirements.

What is the life span of American bobtails? This breed of cats requires at least three to four years for the proper development which is much slower than other cat breeds. However, their average life span noted is between thirteen to fifteen years.

Does this breed have a history of health issues? This breed is usually healthy however it has the potential to develop some genetic disease but that happens very rarely. There are no such health issues which have been following American bobtails from past.

Furthermore, some tailless bobcats can have spine issues that affect their control abilities so it is very important to take a health guarantee from the seller in handwritten form.