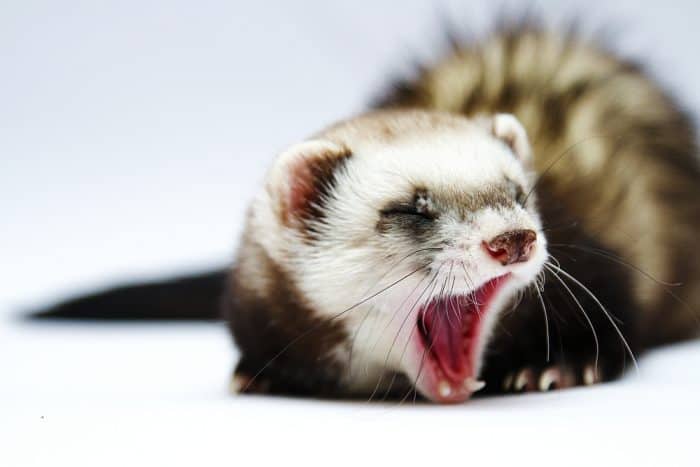 Ferrets have been living with humans for thousands of years and are more than just mere pets. Ferrets have been as denotations in pop culture and been given their own term “Ferret out” which means to drive out something like a ferret drives out animals during hunting.

Here are 30 plus of the best ferret quotes

“Do come back and draw the ferrets, they are the most lovely noble darlings in the world.” ~ D. H. Lawrence

“Haste makes waste, so I rarely hurry. But if a ferret were about to dart up my dress, I’d run.” ~ Cheshire Cat

“Slicing a warm slab of bacon is a lot like giving a ferret a shave. No matter how careful you are, somebody’s going to get hurt.” ~ Alton Brown

“He’s like a demented ferret up a wee drainpipe.” ~ Bill McLaren

“Don’t talk to me.” “Why not?” “Because I want to fix that in my memory forever. Draco Malfoy, the amazing bouncing ferret.” ~ J. K. Rowling

“There was a time I thought I was a ferret.” ~ Cassandra Clare

“Stop thinking about Michael,” Tuck orders. “He was cute.” “So is a hairy ferret but I wouldn’t want to date one. […]” ~ Simone Elkeles

“Not all introductions worked well. Rabbits were an unmitigated environmental disaster. Unchecked by any natural predator, they bred at a staggering rate and chewed their way across vast areas of pastureland as well as any garden that came their way. Attempts to control them by introducing ferrets, weasels and stoats did much more harm than good. Although these predators probably killed a reasonable number of rabbits, they also devastated populations of kiwi and raided the nests of flighted birds.” ~ Bee Dawson

“Her chances of a decent marriage were about to be dashed-and all because of a ferret.” ~ Lisa Kleypas

“That’s not a rat, that’s my ferret.” ~ Jennifer Aniston

“Mayor de Blasio has legalized ferrets. Now you can legally own ferrets in New York City. I want to tell you something. If I want to see anymore beady-eyed little weasels, I’ll just keep riding the subway.” ~ David Letterman

“People who are open about their own faults, especially, often want to ferret out “inner feelings” beneath the surface and expose any falsehood, and they think that it’s in their inner feelings that the truth lies. But I don’t think that’s the truth.” ~ Mamoru Hosoda

“Human language is lit with animal life: we play cats-cradle or have hare-brained ideas; we speak of badgering, or outfoxing someone; to squirrel something away and to ferret it out.” ~ Jay Griffiths

“Scientists are human. We have our blind spots and prejudices. Science is a mechanism designed to ferret them out. Problem is we aren’t always faithful to the core values of science.” ~ Neil deGrasse Tyson

“Many times, I like to read the script before I even know who they want me to play, so I can read it and really enjoy it as an audience member. I think that’s given me the ability to ferret out the really special scripts from all the rest.” ~ William H. Macy

“Now that physics is proving the intelligence of the universe what are we to do about the stupidity of mankind? I include myself. I know that the earth is not flat but my feet are. I know that space is curved but my brain has been condoned by habit to grow in a straight line. What I call light is my own blend of darkness. What I call a view is my hand-painted Trompe-l’oeil. I run after knowledge like a ferret down a ferret hole. My limitations, I call the boundaries of what can be known. I interpret the world by confusing other people’s psychology with my own.” ~ Jeanette Winterson

“I am a Top shop homing pigeon! I can walk into the Oxford Circus branch and ferret out the best bits in minutes.” ~ Ashley Madekwe

“In early days, I tried not to give librarians any trouble, which was where I made my primary mistake. Librarians like to be given trouble; they exist for it, they are geared to it. For the location of a mislaid volume, an uncatalogued item, your good librarian has a ferret’s nose. Give her a scent and she jumps the leash, her eye bright with battle.” ~ Catherine Drinker Bowen

“… one of those librarians who rules the stacks with an intimidating scowl, whispers quiet sharply enough to lacerate the tender inner tissues of the ear, and will pursue an overdue-book fine with the ferocity of a rabid ferret.” ~ Dean Koontz

“I suppose we all share this pipe-dream of being able to reach out a hand and find anything at will; what is amazing is that we think that good filing could somehow make it comes true. On the contrary: putting a letter into a filing system is like releasing your ferret in the Hampton Court maze.” ~ Katharine Whitehorn

“We were totally opposite – me coming from the West Coast and a junior college, and him [ Christopher Reeve] from the hard-core Ivy League. He used to be the studly of all studies, and I was the little fool ferret boy.” ~ Robin Williams

“I don’t appreciate people who celebrate their dog’s birthdays with “dog parties,” and then invite their friends who don’t even have dogs. I understand why people like dogs, and I think they definitely bring more to the table than cats or those godforsaken ferrets, but I don’t think it’s healthy for people to treat their dogs like they are real people.” ~ Chelsea Handler

“Nature’s intent is neither food, nor drink, nor clothing, nor comfort, nor anything else in which God is left out. Whether you like it or not, whether you know it or not, secretly nature seeks, hunts, tries to ferret out the track on which God may be found.” ~ Meister Eckhart

“There is a reason why the other man thinks and acts as he does. Ferret out that reason — and you have the key to his actions, perhaps to his personality. Try honestly to put yourself in his place.” ~ Dale Carnegie

“Leo smiled and stroked her hair. ‘We’ll both be fine, Marks. We’ve just begun our journey…and there’s so much we have yet to do.’ He spoke more softly as he heard her breathing turn even and steady. ‘Rest against my heart. Let me watch over your dreams. And know that tomorrow morning, and every morning after that, you’ll awaken next to someone who loves you.’ ‘Dodger?’ she mumbled against his chest, and he grinned. ‘No, your confounded ferret will have to stay in his basket. I was referring to myself.’ ‘Yes, I know.’ Catherine slid her hand up to his cheek. ‘Only you,’ she said. ‘Always you.” ~ Lisa Kleypas

“But now that she was my apprentice, every such thought caused a guilty twitch in my neck, as if someone had dropped a sleek, stinky ferret there. Guilt ferrets are bastards.” ~ Kevin Hearne

“Cole – I just thought of a new game. Jaz – What’s that? Cole – Splat the Specter. Jaz – Rules? Cole – You can help me make them up. Right now all I know for sure is that it involves water guns filled with grape Kool-Aid and two ferrets named Biff and Chlamydia. Vayl – Why Ferrets? Jaz – Really? You want to know about his choice of pets when he’s named one of them after an STD?” ~ Jennifer Rardin

“Men do not know the natural infirmity of their mind: it does nothing but ferret and quest, and keeps incessantly whirling around, building up and becoming entangled in its own work, like silkworms, and is suffocated in it.

A mouse in a pitch barrel…thinks it notices from a distance some sort of glimmer of imaginary light and truth; but while running toward it, it is crossed by so many difficulties and obstacles, and diverted by so many new quests, that it strays from the road, bewildered.” ~ Michel de Montaigne

“It is a society of laborers which is about to be liberated from the ferrets of labor, and this society does no longer know of that other higher and more meaningful activities for the sake of which this freedom would deserve to be won.” ~ Hannah Arendt

“To be a super-trader, you’ll need an edge to overcome the laws of probability and the uncertainty of the marketplace. That edge comes from information flow, the ability to correct your habits in terms of the market’s characteristics, and being able to take risks, cut losses, expand your information network, ferret out ideas, and make recommendations.” ~ Ari Kiev

“Wherever you may seek solitude, men will ferret you out and compel you to belong to their desperate company of odd fellows.” ~ Henry David Thoreau

“OH NO YOU DON’T, LADDIE!” Harry spun around. Professor Moody was limping down the marble staircase. His wand was out and it was pointing right at a pure white ferret, which was shivering on the stone-flagged floor, exactly where Malfoy had been standing.” ~ J. K. Rowling

“So far as Chairman Mao’s own hopes were concerned, he initiated the “Cultural Revolution” in order to avert the restoration of capitalism, but he had made an erroneous assessment of China’s actual situation. In the first place, the targets of the revolution were wrongly defined, which led to the effort to ferret out “capitalist roaders in power in the Party”. Blows were dealt at leading cadres at all levels who had made contributions to the revolution and had practical experience, including Comrade Liu Shaoqi.” ~ Deng Xiaoping

“View life as a learning opportunity. Ask God what He wants you to learn from the situations you face. . . . When we set aside specific time to listen, He often encourages us with His presence and promises and interprets to some degree the circumstances of life. Take advantage of the natural lull after hard times when you’re pulling together the pieces to sort through the events and ferret out the lessons.” ~ Jean Fleming

How long do ferrets live? Ferrets can live up to around 7 years.

Are ferrets rodents? No ferrets are actually members of the weasel family and they were domesticated thousands of years ago.