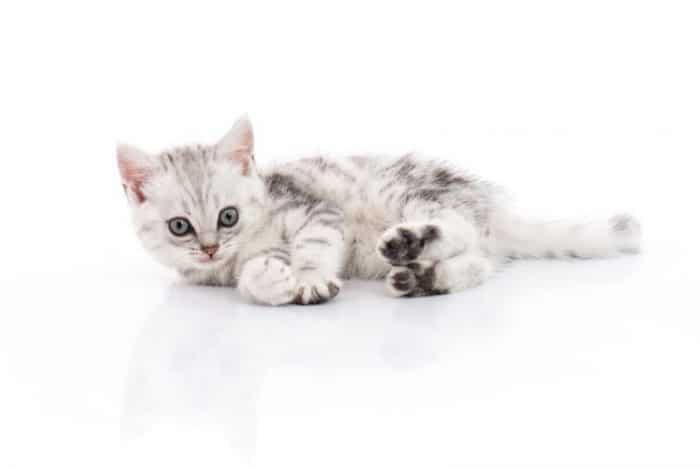 I have the cutest pet in this world and it is none other than an American Shorthair Cat! Now, if you are wondering what makes her special? Then let me just tell you some amazing fun facts about her!

So, what makes American Shorthair cats special?They are loving, cute, and friendly like all other cats.  Here are the Best 27 FUN FACTS about them that makes them SPECIAL!

But before taking a look at the facts, let me just give an overview of the American Shorthair breed. Let’s look at their following characteristics in detail, so that you know how cute they are!

American Shorthair is a muscular cat with short ears and a round face.

It is known to have more than eighty patterns and colors but silver tabby is known to be the most common and popular one. Their fur coat is dense and think that protects them during harsh weather.

The word ‘happy’ is usually used for American Shorthair as they are well known as affectionate, cute, and playful cats.  They are social, so they can easily mingle with other animals! Also, they have the willingness to learn new things, so they can be easily trained too!

They are generally healthy cats, however there is one hereditary disease that is found to be common in them, and that is called Hypertrophic cardiomyopathy (HCM).

It is a heart disease and as is genetic therefore it should be initially tested through screening and hence cats with HCM should be removed from breeding programs to eliminate any kind of risks in future.

1. They Are Born Hunters

According to history, the ancestors of American Shorthair breed have travelled with European Pioneers on Mayflower. Back then, they were considered as hunters rather than pets.

Also, what makes them great hunters is the main element required for hunting; patience.

This differentiates them from other cats, making them a great and popular cat breed!

Can you imagine a cat saving lives? Well, American Shorthairsdo!

They have been entitled as live savers in history as they are known to have saved hundreds of lives by killing mice and rodents which contained diseases.

3. They are not shy and love to Mingle

American Shorthairs are well known as easily adaptable lap cats with a quiet aura. They love to mingle with their family, children as well as other pets! Their calm personality and gentle nature makes them a great and purr-fect family pet.

Well, who doesn’t know about American Shorthair?Everyone does!

They were one of the first five breeds to be recognized and have been known as the ‘Cat of the Year’ in 1965, 1984, and 1996 by CFA- Cat Fanciers Association. Ever since, they have been popular and desirable pets!

5. They come with such Diversity

They are known to have more than eighty patterns, a myriad of colors, and seven coat patterns!

However, the most common and the popular one’s are known to be silver tabby, tortoiseshell, solid, and calico. There is great variation among this breed to choose from!

6. OMG, do you know a cat breed this FAMOUS?

Who could have imagined that American Shorthairs have an ancestor who has lived in the white house?

That, too, with President George Bush! He is known to have owned a black American Shorthair for eight years, who was named India, inspired by a baseball player named ‘El-Indio’

7. They are easy to train

American Shorthair is known to be a fun-loving cat, as they love to interact with their owners. Hence, they love activities and it is easy to train them!

They are pedigreed cats! Their real name is known as domestic shorthair and the pedigreed are called American shorthair.

You can spend ample amount of time with your favorite American Shorthair as their life expectancy ranges between 12 to 20 years! All you have to do is treat them well and feed them a well-balanced diet.

How can one cat be an all-rounder?

Well, American Shorthair is!It has an amazing, affectionate personality. It loves to playand have fun! Thecat attaches itself to the family and does not always require attention, so it is considered to be a good family companion.

When it comes to grooming, as their name itself suggests, American Shorthairs are easy to groom. Their shedding is moderate and easy to handle. However, regular combing should be done to keep its coat shiny and healthy!

12. They have the most amazing coats

American Shorthairs have a thick and dense coat that helps them specifically during winters as well as other seasons and makes them look cute and fluffy, too!

13. They are super athletic

American Shorthair’s overall look is muscular and powerful as they have a broad chest, a well-developed muzzle, and strong jaws.

Have you ever imagined a cat which is a height lover?

American shorthairs just love to jump around and find places that are situated up high.If you ever come across a situation where you are unable to find your American Shorthair, then don’t forget to check the top of your fridge or cabinets!

They don’t demand a lot of attention to stay happy and are well-behaved and independent. They can easily indulge themselves in their own activities, so they are known to be best suited for single working owners.

Their physical appearance is really adorable as they have round faces and short ears. I am not at all surprised that they are so famous for their good looks.

American Shorthairseasy adjust as they are environmentally friendly cats! Also, they have the tendency to survive harsh winters, as well as summers.

18. They are low-maintenance cats

You don’t need to be worried for their maintenance if you own an American Shorthair.They can keep themselves busy and don’t annoy if they are not being attended to.

Therefore, one can simply enjoy having a cat and as well as have his or her me-time! Also, they don’t require extensive maintenance so all one has to do is take care of their diet and grooming.

19. They love cleanliness and are hygiene conscious

American Shorthairs are clean cats.They love to keep themselves clean and prefer that their litter is maintained too.

The American Shorthairs are medium to large in size and can weigh from six to fifteen pounds.

Female American Shorthairs tend to be on the smaller side as compared to males. It is, however, important to monitor their weight so that it is controlled and they don’t become obese which can affect their health.

They love to socialize as they are human and animal-friendly pets. They can make friends in less time and have a good tendency to welcome new people in their circle.

American Shorthairs love to play, exercise, and have fun!

They love to explore and can even find things to keep themselves busy. Interactive toys like this lazer toy are highly preferred by these cute ones.

23. Their CAT-TANTRUMS are easy to handle

If you own an American Shorthair, then you know what I mean.

Well, they are not annoying and one can easily handle their tantrums which can be related to food, exercise or play.

How often do they throw these tantrums? Well, once in a blue moon!

They have been well known in history for their rat catching abilities, however they have been discovered to be expert in killing insects, too. So, your home will be an insect and rat-free zone if you plan to keep an American Shorthair!

If you’ve watched lots of Tom and Jerry in your childhood, chances are that you thought this was never possible. I, for one, always thought it was too good to be true!

Well, if you own an American Shorthair and plan to keep a dog too, then you don’t have to worry as they easy get along with dogs!

They have the tendency to play and even tolerate dogs, so that is a win- win!

26. They have the most STUNNING eyes!

The eyes of American Shorthairs enhance their overall features. Their irishave a variety of colors such as:

27. They believe in Equality!

It is such a friendly pet that it may prefer loving everyone equally, including strangers!

6 tips you must know if you own an American Shorthair!

1. Don’t ever force your American Shorthair

As much as American Shorthairs are famous for being friendly, they love their independence too. It is recommended not to force them to be lap cats.

Even though American Shorthairs love to play with kids, they shouldn’t be left with kids without any adult supervision as children are more likely to do stuff like pull their whiskies or irritate them.

3. Keep them Active and Energized

It is important to keep your American Shorthair active through exercise and play, and a regular log must be maintained to check their weight.

4. Give them a good and a healthy diet

A well-balanced diet is as important as play, so their diet should be nutritious and monitored as they have the tendency to over-indulge when it comes to food. I feed Hill’s Science Diet to my cat in order to maintain its protein intake. Its taste is so great that my cats don’t eat anything else.

American shorthair is well known as a hunter according to history, therefore they should be given space to indulge in their hunting skills.

Also, they can get bored easily by playing the same games again and again, therefore owners should switch and keep introducing new games to maintain their interest.

6. Be gentle with them while Grooming

When it comes to grooming, cats can be finicky.Therefore, there are higher chances that you might end up raising your voice or punishing your American Shorthair.

In such cases, it is important to reward them using positive reinforcement such as giving them their favorite meal or play with them so that during the next grooming session, they remain calm.

How to take care of American Shorthair cats?

These are the must do things that American Shorthair owners should do on regular basis to keep them healthy!

What health problems should I watch for, if I own an American Shorthair?American Shorthairs are healthy cats, however there are certain health issues that owners should be aware of and that include:

Obesity: It is the most common health issue to be found among American Shorthair. It is important to monitor their weight regularly by limiting their food intake, providing well-balanced diet and adding daily exercise to their routine.

Hypertrophic cardiomyopathy: It is a heart disease that is found to be common, it thickens the walls of heart muscle by causing the heart size to increase.

Hip dysplasia: It is hereditary and it causes a defect in hip socket. It may lead to complete paralysis; therefore, it is important that during purchasing that you get your American Shorthair hips x-rayed by the vet.

What type of Cat food is best for them?It is important to provide a balanced cat food diet for American Shorthairs as they have the tendency to gain weight. Therefore, a healthy weight formula is recommended for them in order to ensure that their diet consists of nutrients best suited for their body, weight, as well as their metabolism.

How can I control obesity of my American Shorthair?American Shorthair are usually at risk of obesity, so in order to minimize the risk, it is important that owners keep their cat engaged in exercise and interactive toys. Moreover, diet should be monitored as well so that their over-eating is taken into account.

How would I know if my cat is suffering from Hypertrophic cardiomyopathy-HCM?Initially there are no symptoms of HCM, but there as time progresses the following symptoms can help to identify it, they are as follows:

Are American Shorthair good for breeding?They are known to be one of the healthiest cat breed but they are at risk of developing many illnesses. Most of the American Shorthair are under risk of heart diseases, so it is recommended that their detailed health screening is done initially if you plan to breed your cat.