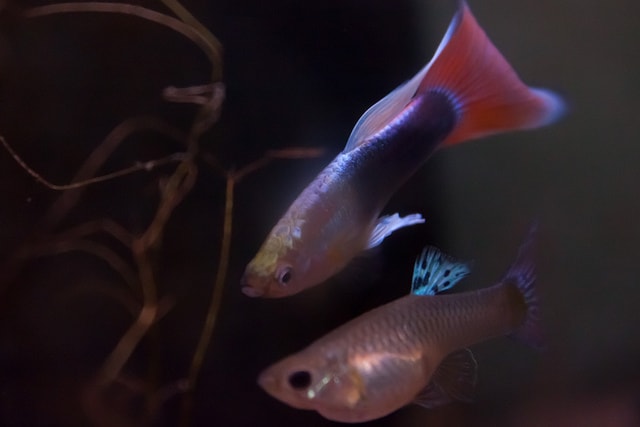 In order to have a beautiful tank at home, guppies will always be your number one choice. But you must already know that guppies reproduce a lot. Thus, you need to know how to control that guppy population.

To control your guppy population means to do some preparations in order to achieve what you want. You must have a convenient ratio between male and female guppies that you have in your tank.

Let us get more details about the guppy male to female ratio since it is a very important issue that needs to be discussed with every pet fish owner especially beginners!

The best ratio is to have 1 male and 2 females or 2 males and 4 females. This would be a balanced ratio and would help you control your guppy population. Remember that overpopulation of guppies could occur at any time and an overcrowded tank is not a good one for the fish and for you too.

How Many Male and Female Guppies is Best for Breeding? (Video)

Let us see why it is important to have a good ratio between male and female guppies in a tank. First of all, we are going to know more facts about male guppies.

Recently, scientists have found out that male guppies are usually the most harassing species in a tank filled with female guppies. This harassment is for several reasons: one of these reasons is the male’s constant desire to mate with females.

Males chase females all of the time to impregnate them. You are going to be surprised to realize the fact that sexual harassment exists as well in the animal kingdom. Even though guppies are known as the millionfish and they always reproduce, there is one thing you should know: females most of the time reject the males that are chasing to mate.

So yes, male guppies pay a high cost for their constant harassment of the female guppies. Their constant desire to mate and chase females to grab their attention shortens their lifespan.

This is something very innate and unstoppable when it comes to the animal kingdom in general. This is how the laws of nature work for them and they seem to live in harmony despite our objection of the idea of harassment in general. But it is important to mention that part because no one seems to know a lot about male guppies. There is always something new that you can discover about these species; and since we are talking about the best ratio between female and male guppies, we had to discuss thoroughly male guppies’ nature.

Can male guppies live with each other?

Some pet fish owners are aware of the constant mating between male and female guppies and the never ending pregnancies…so they want to simply get rid of all the females and take the easier path which is to get a tank filled with male guppies only without even one female.

It is not a terrible idea, but it is also not the best idea or a good solution either. If you think that having only male guppies in one tank would make the guppies fight against each other all of the time and end up killing one another, this is not true.

Male guppies would still fight or chase each other even if there are female guppies in the tank with them. Their nature urges them to compete to gain the other females’ attention to choose them for mating.

Male guppies are antagonistic by nature; they compete a lot to show their abilities to attract the females. However, guppies are not at all aggressive yet showing off is something that they will never stop doing. If you have a tank filled with only 2 male guppies, the risk of having a bigger trouble would be very high.

The smaller the group, the worse the situation becomes. Usually, there will be a dominant male that will bully the other one and then, your tank would be ruined by their constant fighting. Larger male groups would be a bit better. So if you plan to still bring back home only male guppies, at least bring a big group of male guppies. 4 or 5 would be good enough.

Have you ever thought that fish as well could have a taste? Why not! When it comes to female guppies, they are very choosy.

They have their own taste and they even have some preferences which we will now mention.  Females would be more attracted by male guppies that have rare colors. But do you know that females struggle and try to choose a male that is not her father, uncle, brother or son?

Males pass their colors to their sons, thus they are responsible for giving the next generation of guppies their sensational colors. This is why females are always so picky to choose different colors of males. Who thought that female guppies would be that smart and always looking for something new!

Can guppies live in cold water with goldfish? Not really, your guppies would not like that. They like tropical water is warm and moving.