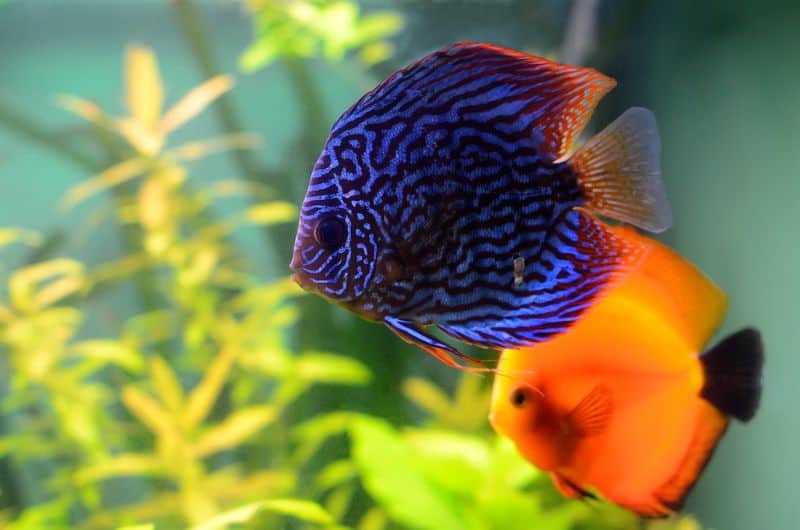 A discus fish has some very different requirements than other fish species. Before getting pet discus, you should know how big of a tank you need to arrange for them.

How big of a tank do discus fish need? The general rule is that 1 discus fish should have 10 gallons of water. If you keep 5-6 discus, which is advisable since they like to live in groups, you would need roughly a 50-gallon aquarium.

Taking good care of fish elongates their lifespan. It also increases the likeliness of healthy breeding. Read on to find out about care tips for your discus.

The bigger, the better

Discus fish need huge spaces. Some experts say that every individual discus needs 10 gallons of water in the tank. But it really depends on the size of the fish. The previous conditions in which the fish grew also play a role in determining the exact amount of water required by it.

Generally, 20 liters are good enough for 1 small discus, but the bigger it gets, the more space you’ll have to offer.

Discus is a species that grows very quickly. It gets inconvenient for the aquarist and stressful for the fish to change tanks so often.

Therefore, it is best if you keep the ratio of 40 liters, which is approximately 10 gallons, to 1 discus. This way, even when the discus grows, the tank will be sufficient to contain it.

The large quantity of water will provide an open space for the fish to grow in. It is also easier to maintain considering that discus is a messy fish species.

Discus fish tend to grow quite big. Your tank shouldn’t just be big enough to hold such a huge amount of water. In fact, it should also be taller than your average fish tanks. Other housing requirements include a gentle current and an environment that is as close to their natural habitat as possible. Include a lot of plants, shaded areas, and different types of surfaces.

When it comes to discus fish, it is very commonly known that they require reverse osmosis (RO) water. Following this piece of information, most aquarists keep their discus in RO water. However, it isn’t a necessity. This depends on the previous water conditions that the fish grew in.

If you’re purchasing your fish from a pet store, simply ask them about the details of the water conditions that they used in their tank.

If the fish were kept in RO water, you will have to do the same. If not, it is totally your choice if you want to switch to RO water or stick with fresh water.

However, if the fish came from a wild habitat, their type will give you the answer. Wild discus comes from soft and slightly acidic water. Most Asian discus come from soft water but a fair few are okay with hard water as well. European discus, in particular, lives in hard water.

In the UK, the tap water is mostly hard and will work perfectly for European Discus. However, you’ll have to pass it through carbon to make it suitable for Wild and Asian discus. If you’re confused about this, you can ask your supplier for help.

Other than the pH, the temperature must also be taken care of- 82 to 86 degrees Fahrenheit is the optimum range. Moreover, 10% to 25% of the tank water should be replaced on a weekly basis.

The first thing you have to consider in terms of tank mates is that discus fish don’t like to live alone. They need 5 to 10 discus mates around them. But, that’s not all you need to pay attention to. These 5 to 10 discus must be of a similar nature as well. If one of them is shy, it will end up getting bullied. Discus fish are usually calm and peaceful. Yet, when it comes to mating, they get very aggressive and competitive.

Keep an eye out for potential bullies and if one or two of the fish seem to be secluded from the others, put them in a separate tank.

It is best that the tank mates are bought together. This will ensure that these fish are already bonded. Possibly, there would already be a pair amongst them, too. However, if you put together fish that are strangers, they will require a lot of time to get comfortable with each other.

Discus from different areas or zones shouldn’t be kept together. For example, don’t mix Asian discus with European discus. On a general note, I’d even advise against mixing discus bought from two separate pet shops!

If you do already have a few discus and want to add more in the tank, you have to be very careful. Initially, keep the new fish in a separate tank. After a few days, take a new fish and an old fish and put them together. If there is a chance of acceptance, you won’t notice any problems for 10 days. Only then should you add the new ones to the tank. However, there is also a possibility of rejection which might be visible in the form of ‘discus plague’ which is a deadly viral infection found in discus fish.

Despite being peaceful and calm, discuses are not the friendliest and like their privacy. Hence, tank mates from other fish species are a huge risk for them. Your discus can possibly die if they don’t feel comfortable with their tank mates.

If you breed your discus, there will eventually come a time when they won’t fit in your old tank. But breeding discus is not an easy task at all.

The difficulty level for breeding discus is definitely high. The first obstacle is pairing. Discuses that are staying together in a tank will bond on their own. They will form pairs on their own, too. Although this can take a lot of time, but if you don’t want to wait for such a long, indefinite time, you can buy a couple that is already paired.

I don’t recommend purchasing online but you can always opt for a trustworthy fish supplier or aquarist.

Once you have a pair, you must keep them away from other fish. However, the environment should be something they’re familiar with. You can either keep the pair in the same tank and shift the rest of the fish in another tank or vice versa. Use similar decorations and preferably, water from the old tank.

If you are planning on increasing your discus family, keep in mind that you will have to arrange for a bigger tank. The ratio of 10 gallons per discus will remain consistent. If the fry start invading the space of your elder fish, your fish tank will become a war house!

When your fish do breed, do not make the mistake of instantly removing the parents from the tank. Discuses do eat their fry but removing the parents will keep the little ones from receiving much-needed nourishment as they feed on mucus released by the mother in the first couple of weeks.

Differentiating between a male and a female discus is very hard. In fact, it is almost impossible. There are no visible differences that can distinguish a male from a female.

When buying discus fish, the best trick that you can use is to get a group of 6. This way, you’ll have a higher chance of getting at least one couple. Other than that, there is a possibility that the supplier or fish owner already has a couple who has previously bred successfully. There is no other way that anyone can claim to sell guaranteed couples.

There are a couple of minute differences that you can look out for if you’re curious to know the sex of your fish. First, males are said to be bigger in size than females. However, that isn’t a guaranteed fact. It is the average statistic but there is also a possibility that your female is actually bigger than your male.

Secondly, males are said to have longer ventral and dorsal fins during breeding. But neither is this a 100% confirmation nor is it an easy-to-notice feature. These fish like to breed in sheltered spaces, therefore, there is little chance that you’ll get to notice this.

How big do discus get? Usually, an average discus will grow to up to 6.0 inches in length. However, 9.0-inch long discus isn’t a rarity either. They weigh somewhere between 150 and 250 grams. The males tend to grow bigger than females in similar circumstances.

What is cross contamination? When two discus fish don’t feel comfortable around each other, they cross contaminate. It is referred to as ‘discus plague’. The signs show within 48 to 72 hours, though luckily, it can be treated easily. You can use salt dips and malachite green for this purpose. Also, immediately separate the two fish from each other.

Are red-eyed discus fish special? Wild discus have red eyes. It is somewhat a specialty because these days, mutation has reduced the number of red-eyed discus fish. Domestically-bred discus have yellow or red eyes. Some fish owners like to buy only those discus that belong to the red-eyed family. However, that doesn’t really matter. What is more important is that the fish has an eye size proportional to its body size. The eyes should be bright, no matter what their color is.