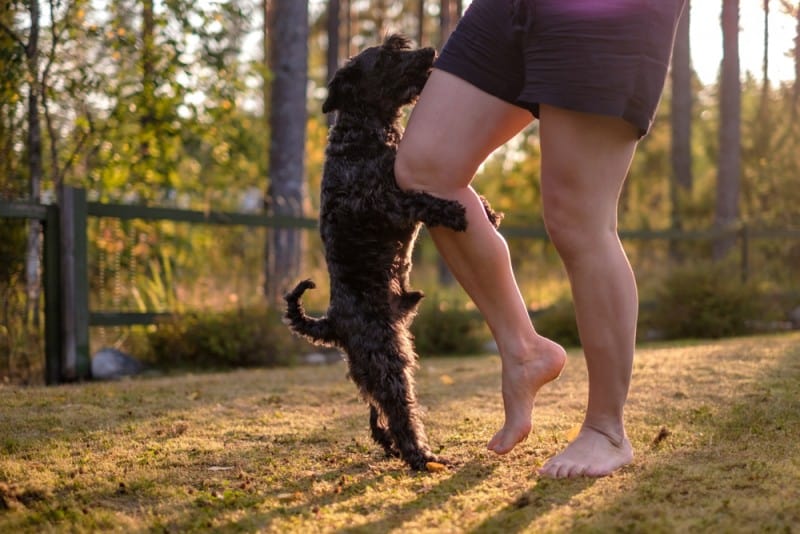 It’s a natural phenomenon, when your puppy is in its growing stage, it gets sexual aroused and feels the need to hump on toys and other obstacles to gain pleasure.

So how can you stop your puppy from doing that? What measures could be taken to stop it from humping?

The best way to stop them is to remove the source the need is generated from. Getting your puppy spayed or neutered from an early age ensures their hormones do not act up. Other than that, an increase in exercise time could also help the puppy not have all the extra energy to burn on humping.

Keep reading to know more about your puppy’s humping problems and it shall help you solve this problem.

Why is the puppy humping

Having a puppy growing up at home is pretty exciting. All of the things the puppy does for the first time are cute and lovely even if it’s humping. But, with time some of the behaviors of the puppy are unacceptable and they become a source of embarrassment.

Your puppy humping at toys and other objects at home is almost fine but doing so in front of others is not good behavior. Their humping could be due to various reasons like:

The above-described issues are faced by most of the house puppies and can be treated with home remedies suggested. Also, a consultation with the vet won’t hurt in this case.

This is most likely to be the cause behind your pet’s humping. When the puppy reaches the age of maturity, it starts to hump on the toys and objects it likes. The home puppies are usually spayed or neutered at this age so they don’t hump on things for pleasure.

However, after the surgery, the puppy might still have memories of humping and it will continue to hump for a few months post surgery as a force of habit. It’s nothing to be worried about, it shall eventually go away.

All puppies have a desire of becoming the alpha of the home. Another pet entering the house or anything else, the puppy tends to hump to exert dominance.

It doesn’t matter if the puppy is neutered or not, they have an internal need to mark their space and this is the way the puppy seems to take charge of their surroundings.

Fun fact: unimpaired female puppies tend to have a higher level of testosterone in the bloodstream compared to the ones who have been neutered. Hence, perform more sexual behaviors.

The hyperactive behavior of your puppy could also be the result of increased serotonin levels. Serotonin is a chemical present in the body of the dog that controls multiple functions, like:

An increase in Serotonin levels occurs when the pup runs out of breath. Hence it starts to hump to balance things out. It can also be caused by insufficient exercise and limited social interaction.

How to stop the puppy from humping

The humping behaviors of the puppy might get out of hand if not treated at the right time. The puppy needs to be either neutered or spayed before reaching the age of maturity or be trained for this.

Also, if the neutering is done after the puppy’s humping habits have developed, the after-effects would be observed with it. This happens because it takes time for the puppy to realize that humping isn’t the same after getting spayed.

The puppy needs to be well trained before reaching this age so it does not perform such acts to embarrass the owner. There are certain rules that need to be kept in consideration while training the puppy.

After all, each dog is different and requires a different amount of time, care, and love to be well trained. This is why you can’t stop training your pup once you have started.

Anyhow, the following video might help you understand even better:

Your puppy craves your attention and love. Most of the bad habits could be changed just by ignoring the puppy or not responding in the way you used to do. When you find your puppy humping, give it a little tough command of ‘no’ and that should make them stop.

If this doesn’t work, place the puppy in the time-out area of the house where there’s nothing to hump on. Having no toys to play and no love from the caregiver would make the pup realize that their behavior is not okay.

The puppy would stop humping and it can be given a little treat or be praised. This would give them the idea that they are appreciated.  A reward means a lot to the puppies, and getting those in return for their changing habits makes them want to improve more.

The puppy could also be humping because of the excessive build-up energy inside and no way to release it. If this is the case, it can be easily resolved as it just requires more playing time for the pup. Also, this would mean you spending more quality time spent with the puppy which would make the bond between the two of you stronger. It’s a win win situation, if you ask me!

Here’s an amazing squeaky rubber ball from chewy so you can exercise your puppy and play fetch with them!

Furthermore, the extra aggression, stress and high energy levels make the puppy uncomfortable and he starts to looks for ways to burn all that off before he sleeps. Since, but there’s no way out, so humping it is.

Hence, puppies should be exercised daily. This will ensure that all the excess energy is drained while playing games in the field and when they go home there’s no more energy left to waste on humping.

Also, to get the better idea this video will surely help:

At what age do puppies start humping?

Puppies do not hump until they hit puberty. So humping is a non-sexual playful behavior that is discovered by the puppy at the age of 6-8 months.

Should I let my dog hump stuffed animals?

This is a normal thing for dogs as they don’t have the same social norms as us humans do. They usually hump on anything they find. Be it a stuffed animal or a person’s leg.

Is it bad to stare a dog in the eyes?

It’s not bad to stare a dog in the eye as they react to eye contact just like humans do. But a stare would probably make them uncomfortable and end up in a fight.

A dog recognizes the kiss as a sign of love and affection. But, in the case of puppies they won’t understand it. Although, with growing age, they do learn what it means.

Do dogs know when you cry?

Dogs do know it when their owner cries. They respond to it in a different manner and try to comfort them in ways they think it’s appropriate.

Usually, puppies hump to release extra energy inside them. This can be easily prevented with a proper exercise routine. Apart from this, spaying or neutering the puppy after it has started humping won’t make the problem vanish away, it has some after-effects.

The humping habit of the puppy won’t be formed, or even if formed, will go away even before you know it.