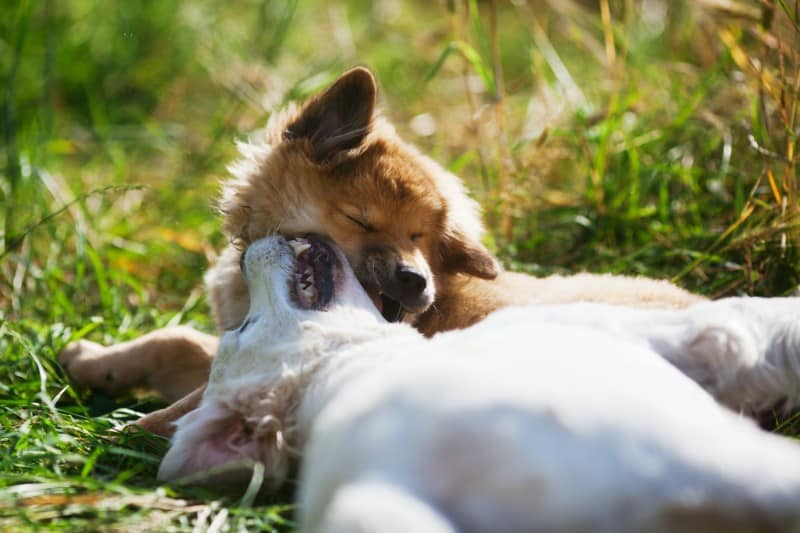 We all know our little canine friends like to engage in hunt games with their pals. The intensity, however, can often be frightening, especially when they reach for the neck, the most vulnerable part.

Here is a thing about dogfights: It is all fun and game…until it isn’t! So, how can you tell if neck biting between dogs is too rough?

The biggest indicator to watch out for is when the dogs involved no longer seem to be having fun together and are visibly aggressive. Also, if the dog being bitten is howling or retaliating, take it as your cue. Body language is extremely important to determine where the playtime ends.

A well-raised, well-trained dog, when grabbing another by the neck doesn’t usually mean any harm. The difference between playtime and imminent danger lies in the intent.

Playtime gone wrong can lead to serious injuries and lots of stress, which is why it must be intently supervised and broken off as soon as you see a sign of trouble. It helps to know what dog playtime should look like. So, let’s start from there.

A Picture of a Perfect Playtime

Perhaps the best indicator that your dog is simply playing around with his pals is the relaxed demeanor. When playing, dogs spend equal time dominating and being dominated. If your dog backs away and then returns for more, know that they are having a good time with their pal.

Here, it helps to know that if you are a relatively new dog owner and your dog is still inexperienced in playing with other dogs, it is crucial that you allow it to play with only one dog at a time.

When it comes to neck biting, Cesars Millan, a professional celebrity dog trainer states that neck biting is usually only appropriate with dogs that your dog recognizes as friends or considers a  part of the pack so to speak.

Here is an interesting video of different dog play styles that shouldn’t worry you.

Let’s break down the most common behavior and mannerism of dogs that can be classified as playful .

Remember, dogs usually like to take turns when playing. If you see only one being dominant, that may mean good times are over.

The surest sign that the playtime is over for your dogs is when they stop hopping around and rolling on their backs submissively. Their movements suddenly become more deliberate and calculated.

You will notice their lips curled into a perpetual growl and vicious snapping of the jaws, rather than random playfulness. And when they go for the neck with that attitude, the other dog howls in pain.

Behaviour to Beware of

First things first, should your dog stop taking turns with its buddy and its movements switch from playful to rapid and efficient: This means he is contemplating how to attack. Now’s the time to step in.

Similarly, there are other signs of aggression to watch for.

That said, it might be entirely possible that it is not your dog who is being aggressive. In that case, you might see your dog trying to get away from another with its tail tucked in. Its body language may appear to be that of retreat

Well, that is a clear sign that your dog isn’t having fun and it is time to take him home.

Disclaimer: Not all Dogs

All the aforementioned signs are merely the tip of the iceberg. It always helps when you know the dog, or dogs, well enough to gauge their behavior.

The truth is that man’s most loyal friend has been bred and crossbred over generations, with each new breed having a specific personality that an owner must absorb and understand. Some traits may be specific to your dog’s breed; others are just aspects of your dog’s individual personality.

The more familiar you are with your dog’s personality, the better you can decipher their intent.

When you are able to tell that neck biting between dogs is no longer playful, it is important to intervene. Neck is sensitive area, and there are reason are wild predators go for it when attacking their prey

However, rough fights don’t just end in physical injuries. They often lead to excessive stress and other psychological issues.

All it could take to create lifelong psychological, behavioral and fear problems in your dog, is a single fight. So preparing yourself adequately to be a good owner will save you a significant amount of heartache and work down the line.

If your dog is aggressive in general and always the one to turn play into fight, you can try calming treats that will bring his energy levels down.

Break Up a Dog Fight

If a fight does break out between your dog and his pals, don’t attempt to pull them apart with your hands or by grabbing their collars. You’re likely to get bitten.

Loud noises may be able to distract both dogs, so you should keep a small air horn with you. If a water hose is nearby, spray both their faces with water.

If you have someone who can help you tackle one dog while you tackle another, you can use the wheelbarrow method to break them apart. Watch how to do it is safely and effectively.

Why do dogs attack the neck?

When dogs play, they tend to imitate how they fight or hunt in the wild. All the predators, including your dog’s ancestor, go for the neck when they attack their prey. Snapping the neck is the quickest and most efficient way to kill a prey.

Going for the neck is their instinct but when playing, hurting their fellow is never the intent.

How do I get my dog to stop playing rough?

It would be ideal that you intervene and stop his play before he gets too excited. You could leash him, make him lie down, and give him something to chew on. If your dog gets easily excited play obedience games with him until he seems visibly calm.

Do all dogs play rough?

Not necessarily. Dogs are domesticated to the point where they even get along with cats. You can almost always tell that the seemingly rough play is not hurting anyone. Yet, if your dog tends to get too aggressive, you should seek professional help.

Neck biting between dogs is not always a problem, but need to be able to tell when it can become one.  By far, the best way to avoid a skirmish between dogs is to be a responsible owner, keep an eye for signs of brewing conflict, and act preemptively to separate the dogs before the situation escalates.