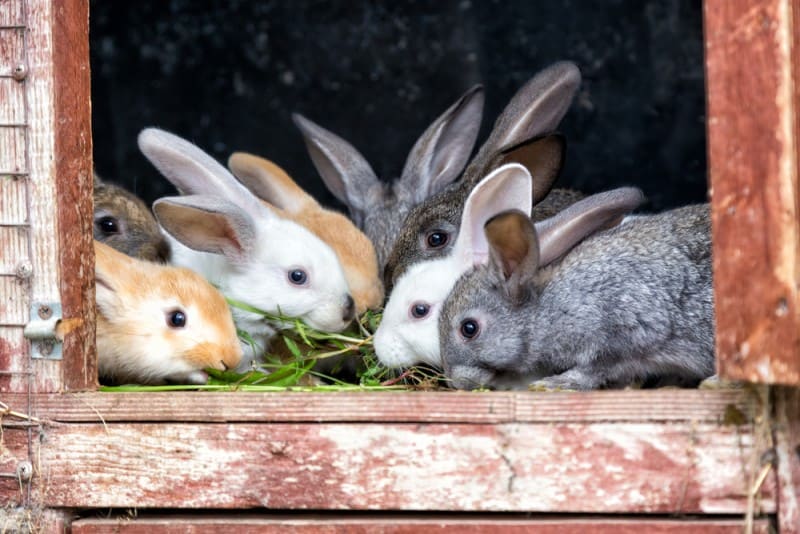 It’s true that rabbits breed at an extraordinary rate.

You can get a pair of two, and within a few weeks you would run out of space to keep them.

So how fast do rabbits really breed to multiply so quickly?

But there’s more to that than just quick breeding.

An average life span of a rabbit is 8-12 years and the female rabbit can keep mating its whole life as she can be impregnated right after having a litter.

When rabbits are not old enough for breeding or being parents, they’re referred as the following:

Just like the babies of cats are called kittens, the babies of rabbits are called kits. The time period between breeding and kindling of the litter in doe is called gestation period. Kindling is the birth of kits from the doe. These terms are specifically used in rabbits, unlike the other animal families.

When do the rabbits become mature?

Rabbits actually have a very risky life as they can’t reach the end of their age and usually die soon. They mostly become prey to wild animals like coyotes, racoons, or even the neighbour’s cats and dogs.

For one, it’s not their mistake but this is what usually happens. Other than this, they die from:

All of these deaths can’t be prevented in rabbit no matter how much you save them. This is one of the reasons they want to increase their population as they won’t live much longer.

When Does are willing to breed, they drop down some major hints of showing they are in heat. They start to act restless, rub their chins on the container of their feed and water or other things present in the cage to show the desire of other rabbits to join.

Generally speaking, when the doe is ready to mate her sexual organs become swollen and change color to attract the buck. The doe might present herself to the buck by lying on her stomach and lifting her tail upwards.

When it’s time to mate, always take the doe to the buck’s cage as the mating would happen really quickly in that scenario. If anything is kept in the doe’s cage, she might become defensive and won’t mate even if it’s another rabbit.

This also works in the same manner for the buck. He might take more time in sniffing the doe’s cage and getting comfortable in there before mating, and hence would take a longer time.

A few rabbit breeders allow the buck to mate twice with the doe before returning her to her cage to assure pregnancy. While on the other hand, some of them take the doe back to the same buck’s cage and let them mate again.

Most rabbits have shown some problems in seasons like:

These are the seasons when rabbits are going through some hard days in their lives. They can’t perform necessary actions as they usually become sick. In bucks, it happens due to excessive heat exposure which causes them to temporarily become sterile and so they can’t mate with a doe.

When bucks are put in high temperatures for consecutive days, it makes them more sterile than the younger ones and this is carried on for 2-3 months.

It is necessary to prevent them from getting sterile due to hot weather. In order to do this, they should be kept in cold conditions and allowed to mate as much as possible in the favourable weather conditions before.

And there’s another problem:

When a doe is mating with a sterile buck, she thinks the litter is close but it’s actually a false pregnancy. Mating with a buck makes the doe think she’s pregnant but in this case, she isn’t as the buck was sterile.

This condition is called pseudopregnancy. Pseudopregnancy lasts for around 17 days and the doe won’t mate for these days thinking she’s pregnant.

As a result, time is wasted and the summer season might be close. The other problem faced by doe would be that she can’t conceive after mating due to unsuitable health conditions.

These would happen due to:

Not to mention that overweight bucks become lazy and they lack libido which causes even more problems in mating.

Libido is basically the sexual desire which is decreased with increasing age.

Rabbits breed at an unusual rate. They are one of the fastest breeding animals. The female rabbit can mate every month and each litter contains an average of 6 kits. So in a year one doe can produce (6*12=72) kits.

And if half of them are female kits, they can mature after 5-6 months of average and start mating between themselves. In a year, a large number of rabbits can be produced. You can’t doubt their strength and energy. The doe can mate after a few minutes she has conceived a litter and get ready for another one.