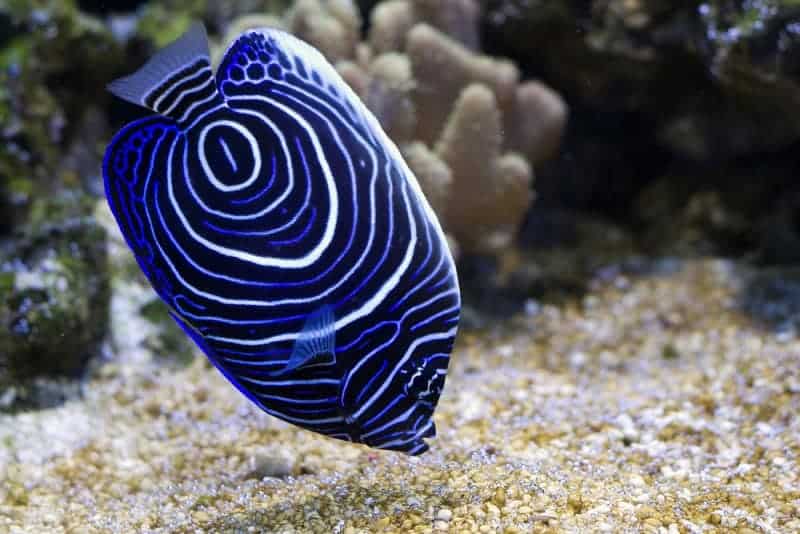 Have you ever seen fish calmly swimming at the bottom of the ocean and wondered how they could do so without getting crushed? Well, we have the answers you seek!

So exactly how fish withstand the pressure? How do they not get crushed?

The answer comes in the form of adaptions. Creatures in the deep blues have adapted themselves to withstand pressure in a number of ways. This includes removing any excess cavities from their bodies and having relatively small sizes. Adaptions like these ensure that the fish that dwell at the bottom of the ocean do not get crushed.

The adaptions vary fish-to-fish and help combat pressure in a number of ways. Curious? Let’s explore how it works!

How Do Fish Survive At The Bottom Of The Ocean? (Video)

How much pressure do fish withstand?

This question is not a simple one to answer since it depends on exactly what depth the fish live at. However, we can look at some general cases.

The unit that we use to measure pressure is pounds per square inch, aka PSI. At surface level, the pressure exerted on us is at 14.5 PSI. Every 33 feet underwater, the pressure increases another 14.5 PSI. This means that only 33 feet below the ocean, you would already be facing twice the surface pressure.

If we do some quick math, we can see that fish living at those depths have to deal with an astounding 833 times more pressure than the average human does. With this ridiculous amount of pressure to withstand, fish need some very handy adaptions to be able to survive.

What happens when the pressure increases?

Now that you know about how bad the pressure can get in the depths, you must be wondering why the pressure matters at all.

Well, to answer that question, you first have to understand how we are able to survive in the open air since it does still exert 14.5 PSI of pressure on us. The air in our body exerts the same pressure on the environment, which lets us survive. The pressure is lower above the mountains, and the “pop” ear sounds you hear are your body adjusting to the lower pressure!

So can your body also adjust to higher pressure? To an extent, yes. Divers have been known to dive to an astounding 1090 feet! Most, however, limit themselves to 150 (which is still about 4 times more pressure than the surface).

With the increase in pressure, our body reacts negatively. The air present in our bodies, in the sinuses, cavities, capillaries, and lungs, tends to get compressed due to the pressure. This can cause a number of bodily reactions, including:

These are just some of the things that would happen to any human going deeper into the depths. However, fish seem to be able to survive perfectly well. This is possible due to the various adaptions they have! What are those adaptions and how they work? Let’s find out!

How do fish adapt to pressure?

We have already discussed that the reason that humans would be unable to survive under extreme pressures comes in the form of the air present within our bodies. With that understanding in our minds, the first adaption that fish use is fairly simple to understand.

Fish near the surface have air sacs that allow them to float or sink by adding or removing air to the bodies. Fish that live in deeper heights have let go of this sack, and make their body as air-free as possible. This is done in a number of ways.

The animals found near the bottom do not have air sacks and do not store air in their bodies. They tend to have more water within their bodies than air, which helps them survive the extreme pressures by combatting them. Water does not compress as easily as air does!

They also typically don’t have eardrums, sinuses, or other organs that store air. This means that their bodies essentially have no air and would be able to adapt to whatever pressure they dive through. However, even that has limits.

Beyond a certain pressure, the molecule of a fish itself can start to get pressed. This means that at such high pressures, the lack of air would do the fish little good. They would still get crushed!

How do fish survive in the deeper ocean?

The discovery of a new form of adaption explains how fish can survive below such levels. The answer is “Piezolytes”, a molecule that prevents other molecules from collapsing.

While all fish have Piezolytes (it’s what gives them the “fishy” smell), the amount present is much higher in the fish that live deeper below the surface. This molecule allows the fish to survive by stopping their proteins and other vitals from being crushed.

The molecule has its limits as well, though, and fish can not live at depths deeper than 27500 feet below the ocean.

How do mammals survive underwater?

So now we understand that fish can survive due to how they are able to reduce the amount of air in their bodies and have adapted to the depths. But the question remains: How do some mammals manage to dive deep without injuring themselves under pressure in the process?

To understand that, we will be taking the case of the beaked whale, which can dive as deep as 10,000 feet! The whale does have a number of adaptions to allow it do so, despite having air-filled organs and lungs.

The most important of these adaptions come in the form of collapsable lungs. While the whale does have lungs that store air, the lungs can be collapsed and compressed completely, and thus be air-free. This reduces the amount of air within the body of the whale.

A number of other adaptions also exist. For one, the whale has higher amounts of myoglobin and hemoglobin. This ensures that the oxygen supply of the whale remains stored for a long time. They can thus dive for an astounding 2 hours without needing to resurface.

Similarly, they can lower their heart rate and stop oxygen supply to certain body areas, to ensure that the oxygen lasts them long enough. Their air canals and sinuses are extremely flexible, which ensures that they do not rupture from the pressure.

These adaptions allow mammals like whales and seals to dive deep, despite not having the fish-features to help them survive.

What happens when deep-sea creatures are brought to the surface?

With the bodies of the deep-sea creatures exerting ridiculous amounts of pressure on their atmosphere, they do not fare well in areas of lower pressure.

When the creatures of the deep are brought to the surface, their body suddenly has to deal with lower external pressures. It does so by filling up with air.

Thus if you bring a deep-sea fish to the surface, it will swell up like a balloon. But that depends on if they have any air in them at all.

The creatures in the deepest parts of the oceans have no air in them and do not swell up. However, their bodies are not adapted to the low amounts of pressure on the surface.

However, scientists are now making containers that can normalize the pressure and help them survive.

Do deep-sea fish have other adaptions?

Deep-sea fish do have other adaptions to help them survive. The bottom of the ocean has little to no light, and oxygen can get very low as well.

The fish that live there thus adapt in a number of ways. For one, they move around very little. That ensures that they exert the minimal amount of energy, and are able to save most of it.

Secondly, fish rely on other senses, such as sounds to move about. Some fish also tend to produce their own light to ensure that they can make their way around the ocean.

These adaptions ensure that the fish can survive the harsh conditions at the bottom of the ocean. With these adaptions, fish can also find food.

The angler fish is popular for using their self-created light to attract fish to them. The fish that come to them due to the light end up becoming a part of their diet.

Deep-sea fish are fascinating creatures, about which much is still not known. With the progress of technology, we might soon be able to understand these creatures better, and better observe their survival.

With the ability to withstand great pressures, these fish are easily the kings of the ocean floor!