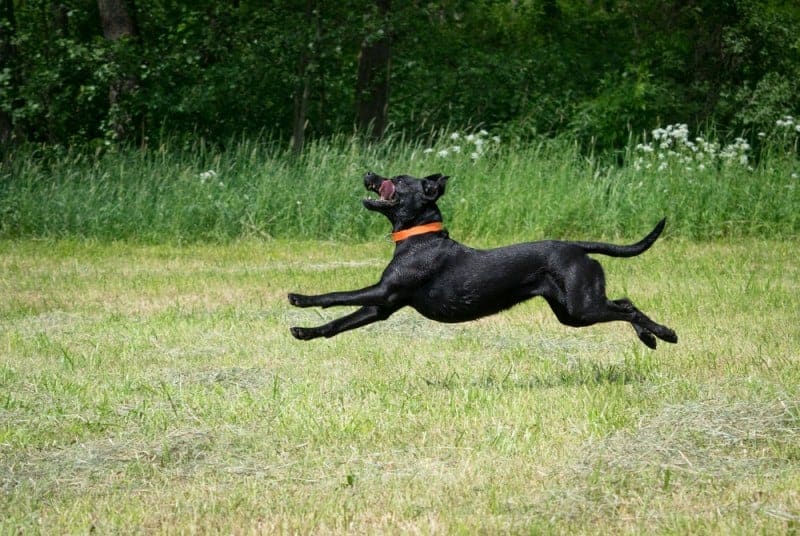 Labs can run at 30 mph, but what about jumping? How high can they jump? This seems like one of those questions that pop into your head when you’re studying for an exam. When in reality, this is actually pretty useful information.

So can these pups jump over an 8-feet high fence in your yard? Well, not really. Let me explain; they can only jump four or five feet high, which isn’t that impressive despite being an athletic breed. They just don’t have that gene in them. This is specifically about English labs rather than American ones.

Don’t worry, this whole article isn’t just about jumping. Sometimes, teaching dogs to jump higher is needed, and sometimes you need to take precautions about their jumping skills. Those are all things we’ll cover later on.

Contents show
Labrador’s high jump? (Video)
What’s the deal with jumping Labs?
How to train your lab to jump higher?
Here is how you train your dog:
How do I stop my lab from jumping so much?
Here are some ways to keep your dog on the ground:
Take away the reward
Turn away
Use verbal commands
Should you get a fence for your lab? And which one?
FAQs
Which dog breeds jump high?
Is jumping good for dogs?
Do dogs know not to jump from heights?
How fast can a lab run?

What’s the deal with jumping Labs?

Jumping up and jumping far are two separate things. They can jump into ponds or over hurdles when they’re running at full speed. Most of it has to do with their body composition. They have short-coupled bodies which provide them with endurance and strength for running and jumping after squirrels. After all, they are powerful working dogs.

They have a muscular body as they’re an athletic breed, but this also prevents them from jumping straight up from a standing position. They’re better at leaping than jumping up. This helps Labs to maintain and build momentum. Who knew dog physics was so intricate?

As mentioned before, there are slight physical differences between English and American labs. One breed likes chips while the other likes fries. Just kidding! English Labs have wider and more muscular shoulders as compared to American Labs. American Labradors also have a slenderer torso and head, while English labs have a blockier head.

In America, most labs are used for field trial and hunt tests, which requires them to run many miles. On the other hand, English labs are mostly used as show dogs, which is why the stocky and short breed is preferred.

These little differences really add up and make it easier for American labs to jump over 5-foot fences and other hurdles.

How to train your lab to jump higher?

Show dogs are not the only ones that need to jump 8 feet high. There are many situations where you need to train your dog to jump higher. It could be for a dog show or just simply into your truck. And if you’re in a situation like that, we’ll break down the process to you.

Not only is this an amazing form of exercise, but it also builds strength. Other than that, it’s a really good way to bond with your lab as it builds trust and friendship. As labs are quite heavy, it’ll be easier to tell them to get into a car or onto an elevated surface. Hence, saving you a lot of time and effort.

Besides, jumping is a cool trick! If you have some extra time on your hands and a bored dog, this may just be the thing for you.

Here is how you train your dog:

An important thing to note is that you have to be careful with puppies, just like you would be with children. Since they’re in a developing stage, too much jumping could hinder the growth of hips and elbows.

How do I stop my lab from jumping so much?

I know, I know, I just helped you train your dog to jump higher, but this is different. We’ve established something by now, and that is: Labradors are really energetic. Excitement is not unknown to them and sometimes they express it through jumping all the time. Even though it’s really sweet that your dog is happy and pumped up, sometimes it can get annoying when you have a child at home. This habit is seemingly harmless, but those with physical disabilities may find it difficult to deal with it. The same goes for older people.

Here are some ways to keep your dog on the ground:

Take away the reward

The reason your lab jumps so much is that it wants attention. By not giving it attention, you’re discouraging this behavior and take way the reward from your pup. Dogs want their owner’s approval and if it doesn’t get it, it stops doing those things.

The best response to a bouncing pup is to just turn away and avoid eye contact. In addition to that, bring your hands up to your chest so your dog won’t rub his head on them. This should be enough for your dog to understand as they are very clever animals. When they calm down a bit, give them a friendly greeting, but stop if they start jumping again.

This method is great if your dog already understands the sit command. Since your dog can’t sit and jump together, it’ll just go for sitting. But if your puppy is too excited for a command like this, ask them to go get their favorite toy or ball. Remember to reward with praise and affection!

Should you get a fence for your lab? And which one?

Since we’re on the topic of jumping, it’s worth noting that your Lab could jump out of the current fence in your backyard. Chasing squirrels is a dog’s favorite hobby, and if it jumps over the fence while catching one, the consequences could be dire. If you don’t have a fence, then this section is specifically for you.

Getting a fence will be the final step in dog-proofing your house. It will make your house safe and keep your Lab inside the yard. Your dog could run into a street or worse, a road, which would not turn out good, obviously.

Naturally, you would think of getting a 5-foot fence because Labs can only jump up to 4-5 feet. Wrong! Your dog can easily jump over that fence if it sprints towards it. A 6-foot fence could do the trick, but the material and type you use can also affect this. For example, chain fences are a bad idea because they act as foot holders for your pup. The design of the fence is essential for it to be climb-proof. A solid panel fence would be recommended in this case.

Now that all of this is sorted, there’s one last thing you have to take care of. You need to make sure that there’s nothing near the fence that your dog could use as a step stool. Things like a planter or a birdbath should not be around.

Now you know everything there is about jumping Labradors!

Breeds such as border collies, Australian cattle dogs, and kelpies are very agile and perform very well in high jump competitions that include barriers and hurdles.

Is jumping good for dogs?

Jumping is safe for a healthy dog considering that your dog doesn’t overdo it and jumps from a safe height. Obese dogs should not jump too much as it puts extra stress on their joints which makes this action risky. Although, bouncing on trampolines, beds, and furniture is not safe as it increases the chances of unfortunate accidents.

Do dogs know not to jump from heights?

Yes! Dogs are clever animals and understand the concept of heights. On the other hand, puppies do not. They’re a lot like human babies and do not have distance perception.

How fast can a lab run?

Labs can run between 20-30 mph as they’re a fit and athletic breed. They also have firmly built bodies as well as good stamina.