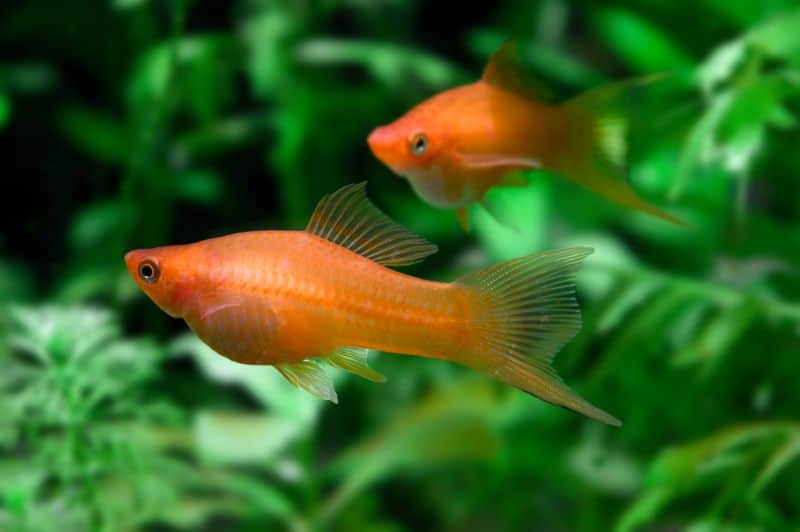 You know your swordtail fish is pregnant and you want to prepare ahead.

Well, it helps to know when exactly your pet is ready to pop.

So, how long are swordtail fish pregnant for? 28 Days.

Swordtail fish has a 28 days gestation period. However, the period can vary by a few days depending on various factors such as the condition of the water in the tank.

You can take this time to prepare your tank for the arrival of baby swordtails (fry) because the mother can easily fill it with up to 80 fry in one go!

Swordtail fish get pregnant too often.

There is this joke which is popular among pet lovers that all you need to make a swordtail fish breed is add some water. This might sound like an exaggeration but in reality, keeping a male and female swordtail fish together means you will have to deal with new fry ever so frequently.

Swordtail fish has the tendency to get pregnant as soon as it has given birth, and they fully utilize this tendency. Fair warning: you might feel like your fish is pregnant all the time and you might even forget how it feels to have a non-pregnant swordtail fish. Not to mention every fry will be mature enough to contribute to your aquarium’s population in just around three months. If you aren’t careful enough, a couple of swordtails will easily overpopulate the tank in no time.

Segregation of sexes may sound like a great way to limit breeding, and it is in fact effective to an extent, but aquatic life is truly full of surprises. Many owners claim that they have witnessed their swordtail female turn into a male when kept in a female-only group for too long. While many say that they have witnessed the phenomenon, researchers and experts contest it with another theory. According to them those are basically the late-blooming males who develop their swordtails i.e. their male genitals later in life.

However, the tales of female swordtails breeding in the absence of a male aren’t entirely false. They are capable of storing sperms inside them and they can get multiple pregnancies from a single insemination.

Another interesting fact about swordtail pregnancy and breeding is that they can breed with other common species such as guppies and platy fish.

Of course, it is nice to see a fry every few days, but there are some practical limitations that call for population control measures. Not everyone can appreciate a swordtail’s tendency to breed so quickly as most people don’t have a tank so huge or a budget so vast!

So, if you want to prevent any unplanned pregnancy for your swordtail fish, it is best to keep the female in a different tank. In fact, all the male and female fish must be kept separately unless you want them to breed. Since it is a peaceful fish, there is little to no aggression caused by such segregation.

In fact, males might get aggressive in the presence of a female. It is not unusual to see a male swordtail fish harassing a female. If you are keeping them together, place enough plants so that the females can easily hide to avoid that harassment.

Dealing with a pregnant swordtail fish

Now, if you fail to properly plan the family for your pet and your swordtail gets pregnant, make sure you are able to read the signs of pregnancy so that you can accurately anticipate the arrival of a fresh lot. This gives you time to prepare the tank accordingly. However, it isn’t that simple.

As easily and as often as swordtails get pregnant, it is a little difficult to tell initially. You have to be very observant.

Now that you know your pet is expecting, it is best to move her to a separate tank or a spawning box. Here, I would like to add that if you wish to breed swordtail fish, you should consider a separate nursery aquarium with lots of plants. If that’s not possible, at least have a false-bottomed spawning box in your exiting aquarium. Keeping the mama fish separately is good not just for her but also for her fry. More about that in the next section.

As I said, a female swordtail fish might get pregnant right after giving birth. It is best to keep the mother in a different tank if you don’t want her to breed again. However, some female fish might get stressed-out in seclusion. So look for signs of stress such as lack or excess of movement. A stressed out swordtail may also stop eating properly.

Remember, caring for the newborn is part of your post-pregnancy duties as a pet owner. Swordtail fry are adorable to the point that they almost seem edible. That is probably what goes on their parents mind; other than the fact that they are omnivores and have no maternal instinct at all!

Swordtail fish may be peace-loving members of an aquarium, but as I said, they are omnivorous. I have seen cases of a mama swordtail eating her babies right after giving them birth. This is why the fry are better off without their parents.

It is best to keep the fry in a spawning box or a separate tank. If that isn’t possible for any reason, make sure there are a lot of plants and other places to hide in the aquarium. With enough hiding spots, swordtail fry are fully capable of protecting themselves from their predators.

While the gestation period is 28 days, a delay of around two to three days is not unusual. However, if you have been watching your swordtail being pregnant for longer than a month and still not popping its fry, you need to make some changes.

The delay can be caused by unfavorable water conditions or the size of the tank. A 20-gallon tank with heavy planting is ideal for your swordtail fish. Water temperature should be 64-82°F with a pH between 7.0-8.3 and DH 12-18.

A pregnant swordtail can also delay birthing if it is too stressed. Avoid changing her tank too often or keeping it completely secluded from other fish. That can stress them out.

It is also possible that your fish isn’t pregnant at all. Contrary to the popular misconception, the gravid spot isn’t exactly the developing fry’s eyeball. It might even be the hue of her uterus which is present in all female swordtails.

Why don’t female swordtail fish have a sword? Female swordtails don’t have the namesake tail because that extended sword-like tail basically forms the gonopodium i.e. the organ of reproduction in male. This helps you identify the gender of the swordtail fish. Some males develop it later in life and can be mistaken for a female till then.

What is the best male to female ratio for swordtail fish? Swordtail are generally peaceful but males can get competitive if there aren’t enough females for everyone. The best way to avoid aggression among males is to give each of them at least three to four females.