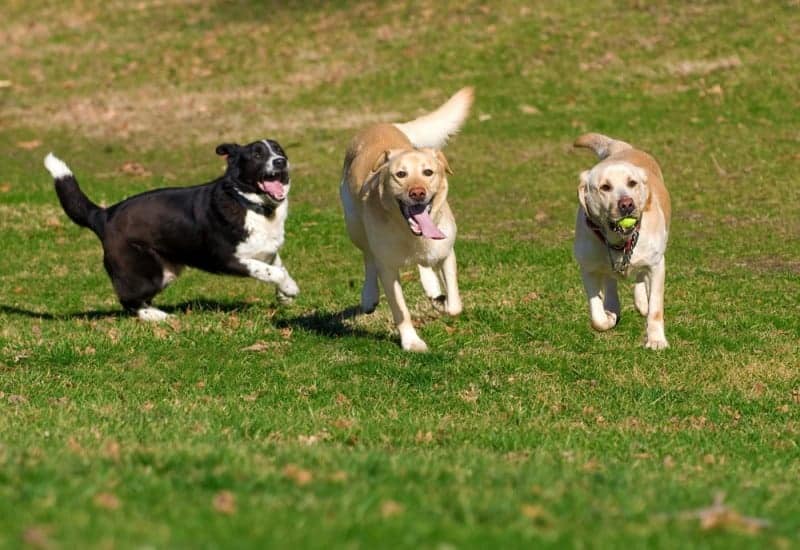 So, your Labrador ran away from a training session to chase a pretty bird. He drinks toilet water at times, and barks at other dogs for no specific reason. That does not mean that your dog is not smart.

So, how smart is your Lab? Various studies suggest that a Labrador is as intelligent as a small child. Yes, sometimes, it may be hard to believe that, but Labradors are a smart dog breed. Don’t believe it? We have proof. Keep on reading!

Contents show
Smart and eager to please
I got it from my mama!
Ranked by experts
Experiments and Proofs
Labrador Tricks (Video)
How smart is my Labrador?
#1 Bred with hunters and fishers
Life in the cold waters
Life with the hunters
#2 Proficient in Math and Language
Measurement of Labrador’s Intelligence:
Coren’s mathematical experiments:
#3 Clever problem solvers
#4 Intelligent enough to be guard dogs
Other Related Questions
Can my Labrador outsmart me?
Is training a Labrador easy?
How to prevent my Lab from sneaking out?

Smart and eager to please 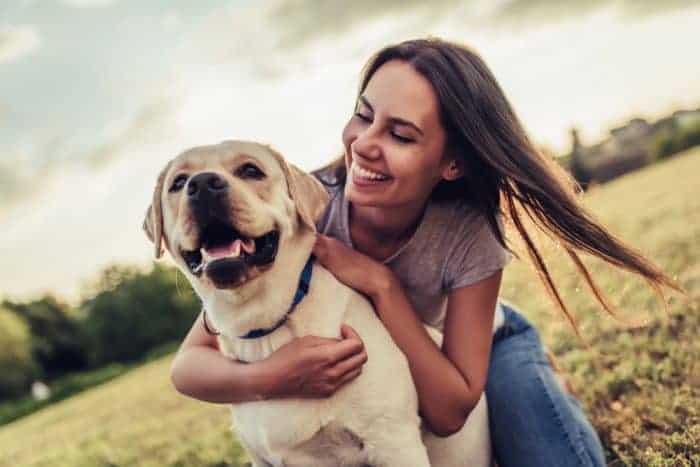 Their ability to learn is half the reason behind their cleverness. Labradors are loving dogs, who would do anything to please their owners. This ‘eager to please’ trait leads them to follow all of your commands. Their intelligence is not an accidental or genetic trait. This trait exists because of their hard-working nature and their eagerness to please their “Hooman.” There is no surprise that in 2014, Labradors were the popular breed in the United States of America.

I got it from my mama!

Labradors are trained and bred to be practical, smart, and obedient. The breed originates from Newfoundland, where they worked with fishermen to retrieve nets. Later, the Labs became partners in crime with hunters, where they retrieved geese for them. Their retrieving skill got them the name “Labrador Retrievers.” Moreover, this consistent partnership between humans and Labradors in tasks like fishing and hunting, honed their intelligence. Hence, we can say that this breed is wired to learn tasks and be obedient.

As per Stanley Coren, a professor of psychology and expert of dog intelligence, Labradors are considered to be one of the top 10 smartest dogs on this planet. Furthermore, he states that from how they complete tasks and obedience measure their intelligence. Considering these two factors, the Labradors rank 7th on the “canine intelligence scale.” Moreover, due to their sporty nature, enthusiasm, and response to training, the Labradors are ranked alongside border collies, golden retrievers, and German shepherds who are one of the smartest dog breeds known to humans.

To test the intelligence of Labradors, Dr. Stanley Coren conducted an experiment and asked 208 professional judges of dog obedience to rank the top 100 dog breeds according to their intelligence. Thus, consequently, Dr. Stanley Coren found out that the experts claim that Labradors are one of the top 10 intelligent dogs. Furthermore, through his behavioral measures, he declared that the intelligence of a Labrador is equivalent to a human child of 2 to 2 1/2 years old.

Keep reading further to understand how smart is your Labrador.

How smart is my Labrador?

Given below are four ways that contribute to the intelligence of your Labrador.

#1 Bred with hunters and fishers

Your Labrador has an ancestral history with hunters and fishermen. As mentioned earlier, Labradors were used as retrievers by fishermen and the hunters as well. They were there with them on the field, which trained them to be smart and obedient. However, at that time, this dog breed was referred to as “St. John’s Dog” or as the “Lesser Newfoundland Dog.”

Life in the cold waters 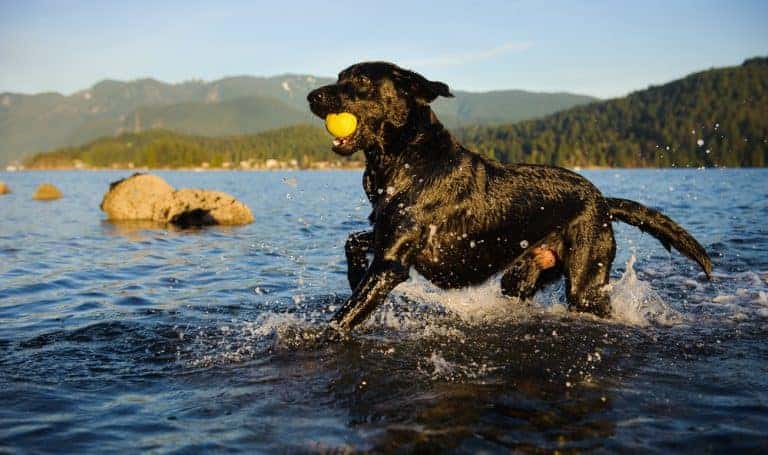 Even when Labradors were known as St. John’s Dogs, they were known for their eagerness to please their owners, and stamina to work each day tirelessly. They were naturally skilled retrievers and used to retrieve the fish from the hooks and the nets. This skill made them excellent sporting dogs. They would spend their days working for fishermen in the cold water, and still had the physical energy and mental capacity to play, when taken home to children.

Life with the hunters 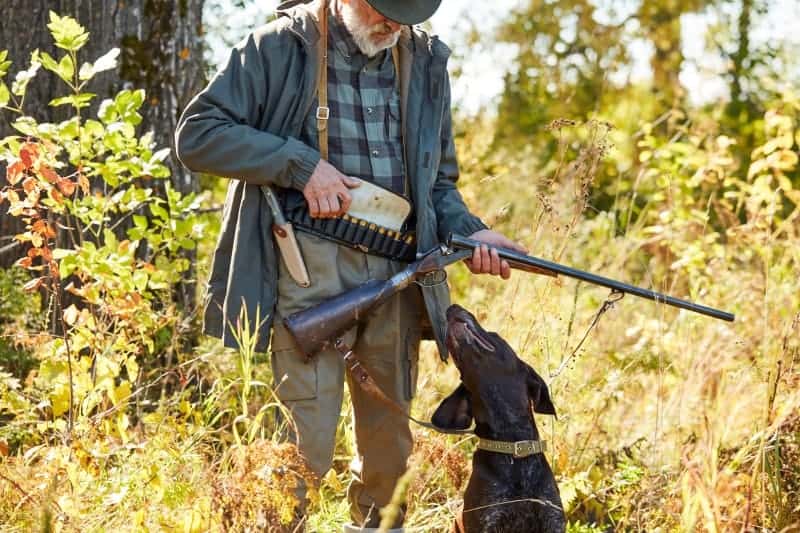 Eventually, the hunters were impressed by their retrieving skills and chose them as their hunting pals. Initially, the dogs were used for hunting birds. Reportedly, the dog would make it a game of fetch. Kind of messed up if you ask me but, they’re animals. This dog breed was capable of breaking the ice of a frozen lake or pond just to retrieve the bird that was shot by the hunter. Then, they would bring it to the hunter and would not move until they were asked again to retrieve another bird. In the 1830s, this dog breed was brought to England, where it was bred into the Labrador breed we know now.

#2 Proficient in Math and Language 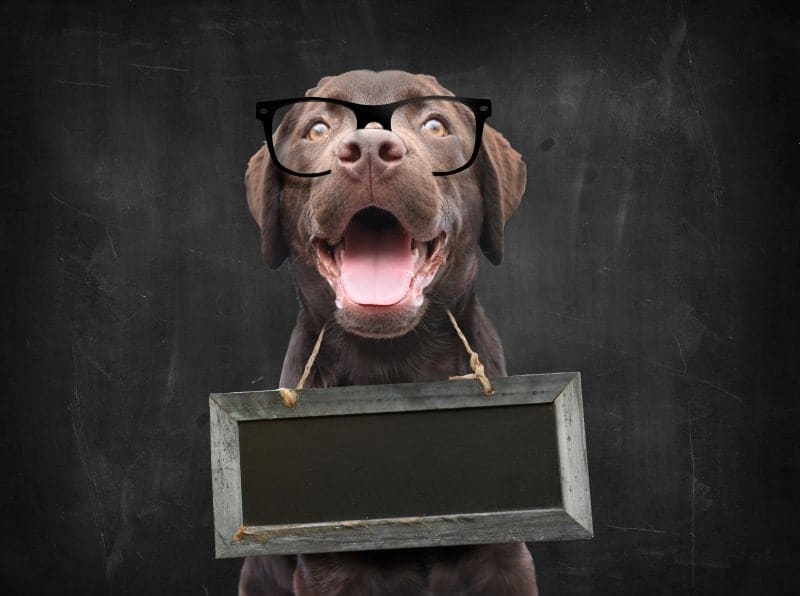 Well, you really should not underestimate your Lab’s worth like that. If trained to their true potential, they have the capability to be as smart as young children.

Labradors, without even speaking any human language, has the mental capacity to recognize more spoken words as compared to a one-year-old child. As per the studies conducted by Dr. Stanley Coren, Labradors can understa    nd an average of two hundred and fifty words, including audio and visual signals.

Dr. Stanley Coren, in his book “The Intelligence of Dogs,” identifies three ways on the basis of which a dog’s intelligence is measured. These three ways are:

Dr. Stanley Coren was able to discover the inner math whiz in Labradors, as a result of his experiments and various studies. He furthermore, deduced that Labradors can understand basic arithmetic and can even count to the number “5”.

Now, you are going to be shocked at this, but your canine friend also has the ability to point out errors in simple equations of math, as well. Crazy, right?

In one of the experiments carried out by Dr. Coren, the dogs were shown a treat which was later hidden behind a screen. Another treat was shown and was hidden. Afterward, when the screen was lifted, and the treats were revealed, the dogs were not surprised when they saw the two treats. Now, some of you might be thinking, “Okay, and? What was the point?” However, on level 2 of this experiment, the researchers kept adding or subtracting the treats secretly so, the Labradors do not notice. They wanted to present a wrong equation, such as 1+2= 4.

On the contrary to the indifference, that the dogs showed in the first phase of the experiment, they showed a visible reaction when the treats revealed to them were more or less than what they expected. Dr. Coren describes that the dogs were indeed surprised, and kept staring at it, as a human child would.

Moreover, their intelligence has a mischevious as well. Due to their ability to learn, remember, and understand, these lovely creatures learn to sneak out as well. Dr. Coren also reveals that Labradors are also capable of successfully deceiving humans for the sake of their benefit.

#4 Intelligent enough to be guard dogs

German Shepherds, Golden Retrievers, and Labradors are considered to be the top 3 ideal guide dogs for visually impaired people. The size of a Labrador helps the person walk comfortably, and their ability to make decisions allows the Lab to maneuver around hurdles. These angels in disguise are also known for putting themselves between their human and sources of dangers, such as a car or a bicycle. As per the Guide Dogs of America reveal that the majority of their dogs are Labradors because of their success rate and performance. Moreover, they said that this dog breed is not only a popular guide dog in America but in other parts of the world as well.

Here are some FAQs about this topic.

Can my Labrador outsmart me?

Not always, but, yes, your Labrador is smart enough to deceive and outsmart you.

Is training a Labrador easy?

Yes, Labradors are generally very obedient dogs and love to please their owners. However, due to their short attention span, you will have to make sure that the training sessions are short but consistent.

How to prevent my Lab from sneaking out?

Make sure all the doors and windows are locked apart from the access to food and bathroom. Moreover, ensure that you leave them with mentally stimulating activities, so your Lab remains occupied.

Labradors are an intelligent breed. Do not take your Lab as a dumb dog just because you have failed to utilize its full potential. How can you expect your dog to become a math whiz when it has never been trained to become one? I suggest that you train your Labrador better and to its full potential to enjoy all the perks of having a smart dog.