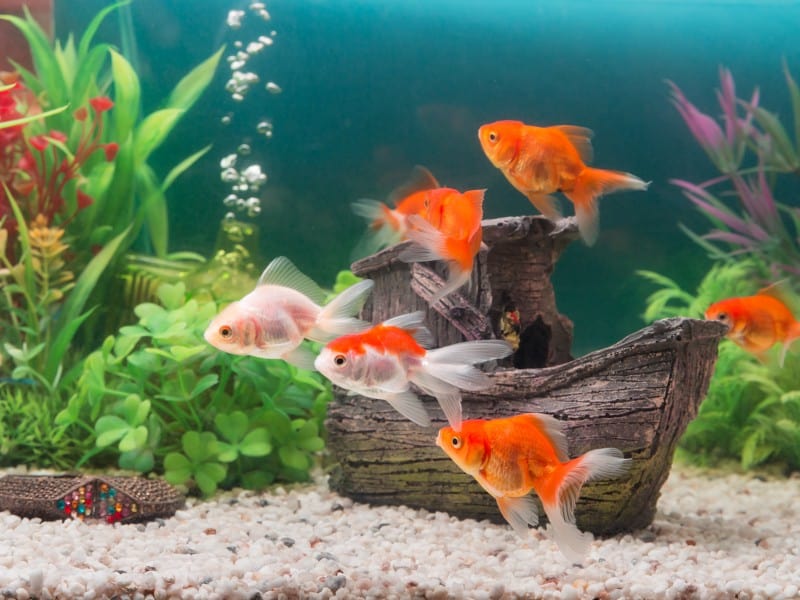 It’s been a year that I have a few Goldfish in my fish tank. Now, like any other pet parent, I’m looking forward to some baby Goldfish. For this, I must know the signs that my Goldfish is pregnant so that I can take care of her and facilitate the fertilization process. That’s why I observed them closely and also asked a few expert breeders about it.

Here’s what I found out:

Goldfish are among those fishes that produce eggs and then eggs are fertilized by the male Goldfish. This means that technically Goldfish don’t get “pregnant”. But when they are all set to produce eggs, they show some signs. Your Goldfish will grow bigger, the tummy becomes round and big, the eggs come out if you hold your Goldfish in your hand, and it is chased by other Goldfish for mating. Unlike other fish, Goldfish don’t show nesting behavior and it also remains active as ever.

Let’s dig deeper to see when your dear Goldfish is ready to produce eggs.

How to know if your Goldfish is pregnant?

Goldfish behavior, while producing eggs in her body, is slightly different from other fish. It’s relatively easy to tell whether your Goldfish is pregnant or not.

You have to observe your Goldfish and if she’s “pregnant”, you have to take care of her so that she can produce healthy eggs.

Your Goldfish would seem bigger in size when she’d be ready to produce eggs. This happens because the egg-producing organ enlarges and consequently the overall size of the fish increases.

This size would be more prominent if you always look at your Goldfish very closely. The overall size also increases so that fish have the capacity to store her eggs and then take care of them as well.

The belly of Goldfish enlarges and this can be seen by viewing it from the above. You may observe lopsided belly that happens due to the eggs accumulating on one side of the body.

The large belly of fish can also be due to constipation. So, you have to look for other signs too.

An interesting and sure sign of Goldfish pregnancy is that its eggs come out if you hold it for a few seconds. You’ll literally see the eggs coming out when it will move on your hand.

But don’t press or squeeze your fish. Also, don’t try to intentionally bring the eggs out using this method if you’re not an expert breeder.

If your Goldfish releases eggs in the water when you hold it then for sure it’s pregnant!

Other Goldfish chasing her

Another sign of Goldfish pregnancy is that the male fish will start chasing her. The female Goldfish releases certain pheromones that indicate she’s ready for mating.

How to facilitate fertilization?

Fertilization in Goldfish is not very common as it requires continuous care of the “pregnant” Goldfish. After that, you have to take care of eggs and then larvae. You can follow some steps to ease the fertilization process.

Settles at one place

Goldfish don’t settle themselves in one place when they’re about to produce eggs. They swim around and don’t like to stay in one place.

If you see your Goldfish isn’t moving around then it’s definitely sick, not pregnant.

Goldfish don’t show any nesting behavior. It’s doesn’t prefer a specific place where it produces eggs. That is why a Goldfish that is about to produce eggs don’t show much aggressive behavior.

Not able to eat

Another myth is that Goldfish doesn’t eat anything when it’s pregnant. No, Goldfish eats normally when she’s producing eggs. So, if your Goldfish isn’t eating anything then it’s sick but not pregnant. Continue feeding it nutritious fish food daily.

If you’re curious to know whether you’re Goldfish is pregnant or not then this read is for you. Goldfish produces eggs rather than giving birth to the young ones. When your Goldfish is ready to “lay” eggs, it will become bigger in size with a bulging belly. It will be chased by male Goldfish and the eggs will ooze out once you hold the Goldfish in your hand.

Fertilization is not very common so you have to facilitate fertilization. Good luck with that!