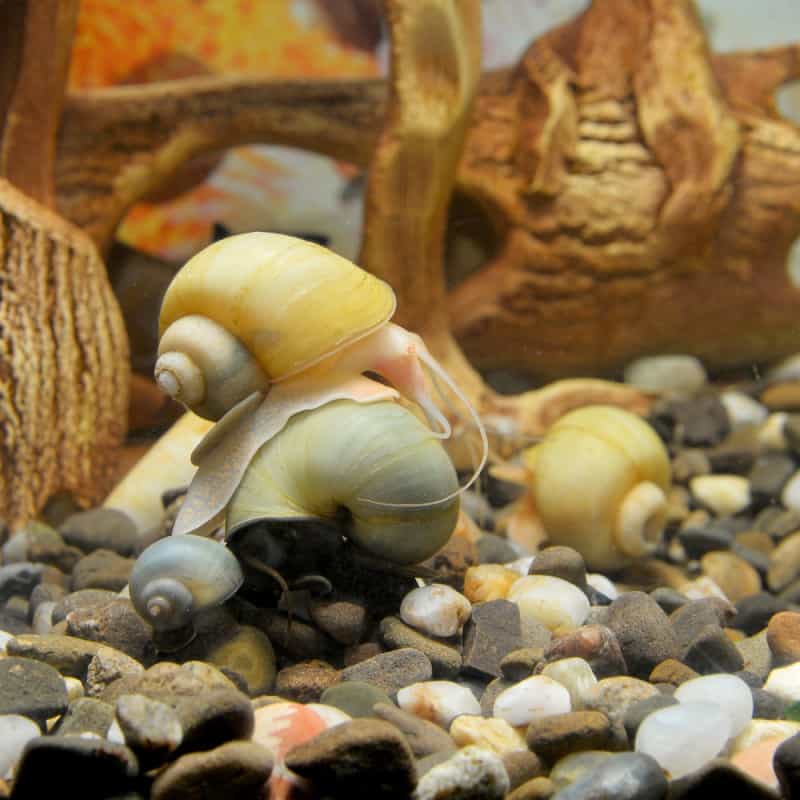 Ornamental mystery snails make a beautiful addition to any fish tank. Snails are useful creatures and popular for their bright colors. They can also eat algae and clean up debris that pollutes the water.

But sometimes, a snail may appear to be lifeless. So, how can you tell if a snail is dead?

Read this guide to discover the answers to all your questions and more!

Is My Aquarium Snail Dead?

Snails are fascinating aquatic creatures whose behavior can perplex you. You may want to know more about their habits and behavior.

Aquatic snails can stay inactive for a long time. Some snail species climb out of their tanks to look for a dark place to snooze, whereas others retract into their shells for a nap. Many snail species can remain inactive and sleep for up to a week.

If you spot an inactive snail lying on the bottom of the tank, you may wonder if it’s dead. Detecting death isn’t straightforward, but here’s how to differentiate a snoozing snail from a dead one:

Is My Floating Snail Dead?

If your snail is floating aimlessly, it doesn’t mean that your snail is dead. Mystery snails enjoy floating and can store air inside their shells. The stored up air helps them float. In nature, some snails float on the water surface to travel faster and look for better feeding grounds.

Hunger is another common cause of floating as snails try to grab floating scraps of food. Many people believe that snails can survive on algae, but they can’t. So, be sure to supplement your pet snails’ diet with vegetables and other high-calcium foods. Good food can help keep the snails’ shells in good condition.

If you think that a floating snail is dead, gently lift it out of the tank and sniff the shell.

When a snail dies, it decomposes inside its shell. The rapid decomposition creates a pungent and strong odor. Like most dead organic matter, snails smell bad when they’ve been dead for a while. Take a sniff of your snail’s shell, and you’ll get a stench like rotting food or blocked drains. If you notice this unbearable smell, then your snail is dead, and you should remove it from the tank using a fishnet.

Also, if you test your tank water regularly, you’ll discover an ammonia spike. After you’ve removed the dead snail, you need to change the water and maintain optimal conditions for other tank inhabitants.

Take a closer look at the opening of your snail’s shell. If you can’t notice the snail’s body inside the shell, the snail is most likely dead. Similarly, if the snail shell feels light and you can’t see anything inside, the snail has probably died.

Snails are permanently attached with their shells, and they may reach a long way out to move, but they never come out of the shell completely. Even when the snail dies, it takes some time for the snail’s body to detach from its shell.

Look for the trapdoor on your snail’s body. A closed trap door indicates that the snail is alive. Dead snails have open trap doors.

You can also examine snails with thin shells for a heartbeat. Put a bright flashlight behind the mystery snail, and you may be able to detect its heartbeat.

If you’re still not certain if your snail is dead, lift it out of the tank and gently pull the foot toward you. If your snail is alive, it will retract its foot back inside its shell.

Finally, put the snail on a piece of flat plastic and observe it for a few minutes. If the snail is alive, it will begin to move around and look for water.

Is My Snail Sleeping Or Dead?

Some snail species stay inactive after eating a large meal. If you have mystery snails, you should know that they can remain asleep for several days after a good meal.

If your snail isn’t moving, it’s most likely sleeping or resting. A dead snail would lay upside down on the substrate.

How Long Do Snails Sleep?

The sleep duration varies from one species to another. Some snails sleep for several days at a time, and others can sleep for up to three years!

The Lifespan of Mystery Snails

A mystery snail can live up to a year. Their lifespan depends on the water conditions; the snail might live longer if it has everything that it needs to stay healthy.

It’s not normal for a snail to die right after you introduce it to a new water environment. If your snail dies, it means the water parameters in the tank aren’t optimal.

Why Do Snails Die?

Snails are sensitive to high levels of toxins in the tank. If you don’t maintain optimal water conditions and the water has high levels of ammonia, nitrites, and nitrates, your snails might die.

Snails need more than just detritus and algae to survive. If not fed correctly, your snails might starve.

Many fish medications contain copper, and it can be lethal for snails. Rather than putting copper-containing medications into your tank, place to fish that require treatment into a quarantine tank.

Mystery snails need warm water. If your tank’s water temperature in your tank falls below 45o Fahrenheit, your snails will die.

Snails may die because of old age.

How to Care For A Mystery Snail

Mystery Snails that are upside down have a tough time getting back into the right position. A Mystery Snail will open its operculum and extend its feet to reach any hard surface such as gravel or substrate. Sometimes the poor animal is unable to reach a hard surface and can’t lift itself right up. If your snail stays upside down for a long time, it may wound up dead.

Snails that lay on their sides can survive, but the best thing you can do is to place the mystery snail upright at the bottom of the aquarium.

Filter intakes are another issue affecting Mystery Snails. They get easily drawn to a strong filter to get more edible matter. Sometimes they get their head stuck in the slots. This can stress out the snail, and its trapped head and body can swell up. If your snail stays stuck for long, it is unlikely to survive and may eventually die.

Trying to set your snail loose from the filter slots is tricky and can injure the poor creature. You can switch off the filter and pray that the snail wiggles its head out of the filter slots. You can also buy a sponge filter to avoid this tragedy.

Contrary to popular belief, food is one of the biggest needs of Mystery snails. You need to provide high-quality food to your pet. If you deprive your snail of healthy food, it can get sick. And if you over-feed your mystery snail, the water quality in the tank will deteriorate.

Mystery Snails also like consuming the algae present on the tank sides. You shouldn’t give excess food to your Mystery snail.

In addition to algae, Mystery snails enjoy a diet that has blanched vegetables. Your snails can have zucchini, shelled peas, carrots, and iceberg lettuce. Boil all the vegetables for two minutes and then let them cool. Cut tiny pieces of the vegetables and offer a small amount to your Mystery snail every morning. If there is some food left after 24 hours, do not offer more. Keep the tank clean by removing the uneaten food.

If you use tap water to fill up the aquarium, then make sure to treat it. Tap water contains chemicals such as chlorine that are harmful to snails. Snails need neutral pH waters to thrive. You can use a pH testing kit to make sure that the water in your aquarium is the right pH. Snails are sensitive creatures, and fluctuations in the pH of the water can be fatal for them.

If you want your snail to stay happy and healthy, then you need to create a clean environment. No creature deserves to live in a dirty tank. If you leave the tank unattended, your snail will not be able to survive. Snails can live off the algae in your tank, but you should keep it clean.

Make it a habit to clean your tank and check that your snails are alive. You can use a fish net to remove any dead creatures from your tank, as decaying organisms can increase ammonia levels and make the tank dirty. Regular water changes are also very crucial. You need to change the water in your tank every alternate week.

Now you know how to tell if your Mystery snail is sleeping, hibernating, or dead. Snails need proper care and a nutritious diet. If you look after your Mystery snails, they will keep your aquarium clean and free from algae.

What happens when a Mystery Snail dies?

When a Mystery snail dies, it decomposes in your tank. This decomposition process releases ammonia into the water, polluting the environment and harming the inhabitants of your tank. You should remove the snail using a fishnet after it dies.

What can I do with a dead snail?

You can leave the dead snail in your tank for scavengers like hermit crabs, but experts advise you to remove the snail immediately. The water quality will deteriorate if the dead snail remains in the tank.

How can I dispose of a dead snail?

There are two main options for disposing of a dead snail:

The first option is to put the dead snail in a Ziplock bag and put the sealed bag lot in your outdoor garbage can.

The second option is to take a knife and remove the snail’s corpse from its shell. Wash the shell and replace the shell in your tank for other creatures to use as a home.

Are Mystery snails good for your fish tank?

Mystery snails play an important part in maintaining freshwater aquariums. They are scavengers and consume algae, dead plant material, and other detritus, which makes them a great option to help you keep your tank clean.

Some snails can become deadly as they breed rapidly and dine on uneaten fish food, plants, and algae. Your fish might starve because the snails consume all their food! They can even eat dead fish. So, feed your fish generously to avoid this problem.