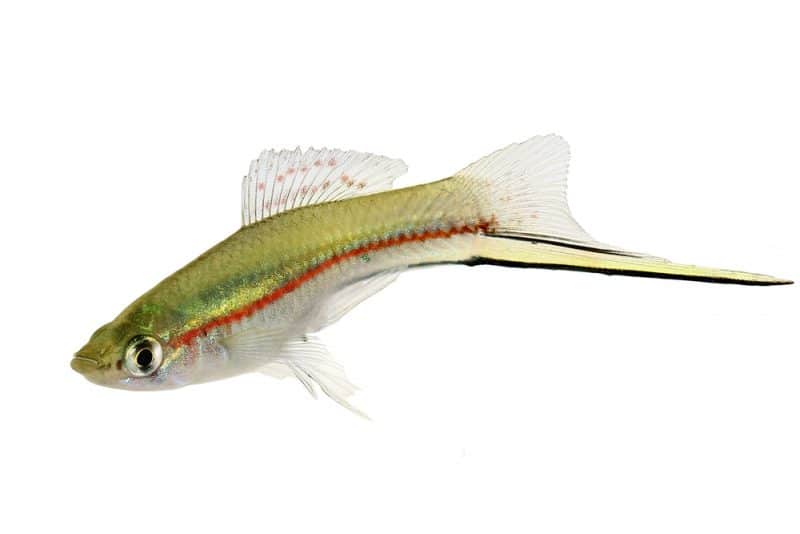 Good observation skills are required to know if your swordtail is mating. Their behavior during this tim will usually make it quite obvious.

So, how do swordtail fish mate? Swordtail takes a few moments to transfer sperm, therefore; you need to be vigilant in order to make sure you do not miss the mating. Male fish would mostly touch the female fish at the underside and rear fins to transfer the sperm. It will not linger and would keep returning to the fish post-mating.

Other signs should also be noted such as the male behavior as they often flare their fins to sway the female.

Livebearers are those species of fish that give live birth. There are around 500 and more species that are livebearers and swordtail fish is also one of them. The body of the pregnant female protects the baby and defends it in the water.

The survival rates are noted to be higher in the livebearers as the young ones are more developed as compared to egg layers.

Egg layers refer to those fish species that lay eggs in the water and later on, those eggs are fertilized by the male fish. The young ones are properly developed after the fertilization and the eggs are hatched.

These are the two important factors to ponder over while knowing how your swordtail behaves sexually. The first essential thing for you is to differentiate between a female and a male swordtail fish. For that, all you have to do is learn the difference between their body structures.

How To Breed + Care for Swordtails (Easy and Simple) – Video

Once you know the gender of the two fish, you can easily assess and keep a check on them if they are planning to mate or not. Remember to keep your tanks with an appropriate number of both the genders if you are looking forward to the breeding process.

You are advised to keep more female fish than males in your tank. This is because a greater number of male swordtail can create an aggressive atmosphere and they may also fight over one female fish. Female fish also get distressed in such a situation so it is always better to keep a greater ratio of the female gender in the tank for successful mating.

The next thing is to pay close attention to the behavior of the swordtail fish. You may notice that the male fish might be excessively roaming around a certain female swordtail, trying to seek attention and finally it will rub its body and transfer the sperm through its fin very quickly.

In some cases, you might witness two fish locking lips as an act of love or a pre-mating act; though this is far more common in the cichlids family.

As mentioned earlier, the mating process is pretty quick; similarly, the female swordtail gives birth in a few days as well. A single male can mate with two to three female fish in one tank. The most sensitive part of the whole process starts after the mating has been done. You are required to be very careful in taking care of the fish after that.

As swordtails are live-bearers, they do not lay eggs and give birth to live babies instead. After around four weeks of mating, the female fish is expected to deliver the babies. About 10-100 live fry are expected to be born in one go.

What’s even more bizarre is that, like most live-bearers, swordtails have no maternal instincts and can eat their own fry. Most of the fry that are born are consumed by the adults in the fish tank if proper measures are not taken. To avoid such a situation, either place a lot of plants in the tank or separate the fry into another tank.

It is also a fact that female swordtail fish can store sperm for a long time and therefore, it can continue to impregnate itself for several months. Remember, that this can be a result of a single mating.

How to care for breeding swordtails?

Once you are aware of the basic knowledge of swordtail mating, you ought to remember other linked factors too. When you feel that the female fish’s belly is growing in size and that it is hiding from the male fish and is often being in an aggressive mood to the fish coming near it; you should separate it from the tank right away. Some important points to keep under consideration are:

Tank conditions should be ideal if you want successful mating between your swordtail fish. The size of the tank needs to be big enough to swim and stay comfortable around the male swordtails. As mentioned above, it should be able to hold at least 29 gallons of water to create the best environment for the fish in the tank.

You must keep a check on the water conditions including the ammonia, nitrite and pH levels. The ideal pH is 7.2 and hardness of 10 to 15 DH. You can also try to separate both the genders by a glass wall in the aquarium for a while.

Remove the glass after some time as this will increase the will to mate among the fish. You can also make a breeding net or keep a plastic breeding box in the tank once the mating session is over. The female will get pregnant very soon so you need to be prepared for that.

Can the fish and babies stay in the same tank? Babies and swordtail fish can stay in the same tank right after birth only if lots of safe plants are added to the tank for their protection and safety. It is even better to take out all the adult fish after the birth of the new fish and put them in a separate tank until they have grown a bit. Adult fish, even the parents, are often hostile towards the baby fish as they have no maternal instincts. Separate tanks will also help you to minimize tank waste which is eventually beneficial for the baby fish’s health.

What to feed to the newborn fish? This constitutes the post-delivery care of both the mother and the babies. Healthy and quality food must be fed to both. However, special care should be provided to the fry. Baby brine and baby food for fish is a good dietary option. Flake food can also be given in powder form. You are required to feed the fry in small quantities but several times during the entire day. Water quality should also be maintained and once they are grown enough they can be moved to the other main aquarium or tank you have for the fish.

Why doesn’t my swordtail fish have a sword-like tail for mating? The sword-like tail is a physical feature of the swordtail fish which is present only in the male fish. If it does not appear to be there or if it is not long enough, it could be because it is a female swordtail. If it is a male swordtail, then you need to wait as it may grow the “sword” with the passage of time, and once it is mature enough, it will start mating with the females in the tank.

What is the life span of swordtail fish? The life span of swordtail fish on average is three to four years. Usually, they do not die because of old age. Their bodies are small and after giving birth, they may get weak with the passage of time. Their beautiful bright colors would also gradually fade into duller shades. Mostly, they die due to physical stress or any other internal disease. There are many swordtail fish that can reach the end of their lives after getting lethargic and extremely weak as a result of delivering babies.