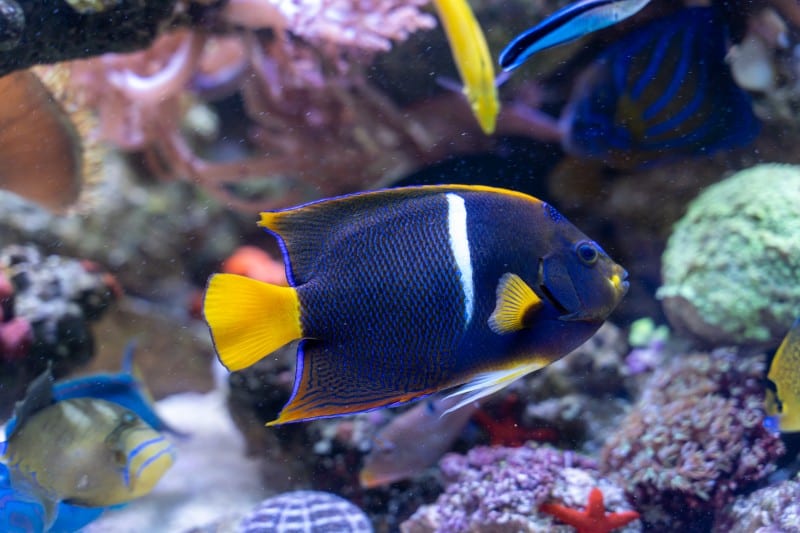 Angelfish are among those fishes that produce eggs. They aren’t livebearers. This means the female doesn’t get pregnant but she produces eggs that are then fertilized by the male angelfish. Your female angelfish will become fat, almost inactive, and will have a protruding breeding tube. You can also witness her laying the eggs if you look very closely. The male then fertilizes the eggs and takes care of the “fry”. The fertilization process isn’t easy and is based on the hit and trial method.

Let’s look deeper into the signs that your female angelfish is about to produce eggs:

How to know if your angelfish is pregnant?

Look for the following to identify male and female angelfish in your tank:

The most obvious sign that your angelfish might be “pregnant” is the large belly. If you notice the fish from the upper surface of the tank, you’ll notice that the belly is bulging out.

Large belly might also indicate constipation in fish. So, you have to look closer for other signs as well.

When your female angelfish is ready to produce eggs, it might hide or settle somewhere rather than swimming around.

If you observe that your angelfish seem inactive, not willing to eat something, and also have a protruding belly then she might be going to produce eggs soon.

Again, laziness can also be due to some illness. So, don’t rely on only one sign.

If you notice that your angelfish has something protruding out from the body then don’t panic. This is the breeding tube that comes out as the fish has to produce eggs. The papilla would be somewhat flat in the case of female angelfish.

How to ease the fertilization (breeding) process in angelfish

Now when you know your female angelfish is going to produce eggs then it’s time to ensure fertilization.

Remember that the fertilization isn’t easy in the case of angelfish. It’s a hit and trial. Even if the eggs are produced, it’s not sure that they’ll be fertilized by the male angelfish. The parents can eat eggs! They can even eat the eggs once they are fertilized. But don’t be disappointed. After two or three tries, they become caring parents and make sure that their babies remain safe.

So, the fertilization process isn’t easy but not impossible. You have to be patient. You should provide a good environment for your breeding fish so that they produce healthy baby angelfish.

So your angelfish might produce eggs but they might not be fertilized. But after two or three tries, the parents would make it and produce little angelfish that you’ll adore for sure.

1 thought on “How to tell if my angelfish is pregnant?”