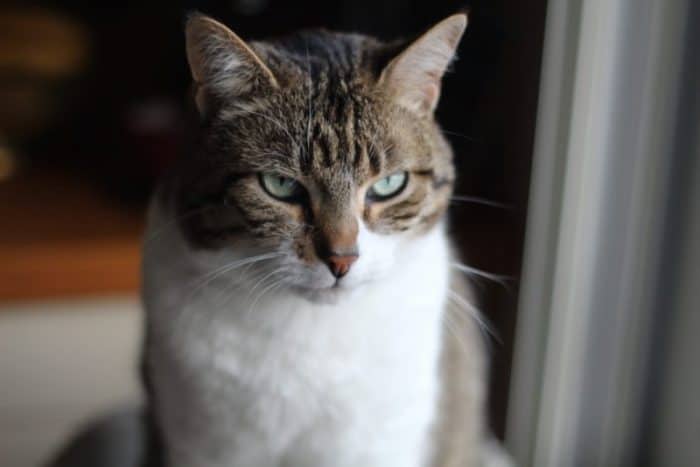 I’m going to buy an American Wirehair, but how do I identify one in the first place?

Lucky for you, we’re here just to help you out with that.

We’ll take you through the 15 simple steps that anyone can follow to easily differentiate an American Wirehair from other breeds. So, without further ado, let’s dig right into it!

Here is a step-by-step breakdown on how one can identify the majestic American Wirehair cat.

The wiry and crimped coat of the American Wirehair is perhaps the most unique feature of this breed. Their coat has a hard and coarse texture, which is somewhat similar to that of steel-wool. Although the texture of their coat is hard, their hair is soft and springy.

Due to a genetic mutation, the coat of the American Wirehair takes such shape and texture. Their origins date back to the 1960s when two domestic shorthairs gave birth to litter, some of whom had a genetic mutation that caused their hair to become wiry and crimped.

A breeder, Joan O’ Shea took these kittens and bred them. Today, although these cats are somewhat rare, they’re a well-recognized breed in the United States.

One way you can recognize an American Wirehair is by examining its whiskers.

Because this gene causes their coat to take up a wiry look, their whiskers will be curled and crimped as well. Although it’s not a surefire way to tell if your cat is a Wirehair, it is certainly a unique feature to their breed.

Because the American Wirehair breed originates from domestic shorthairs, they have a very similar personality to that of a domestic or American shorthair.

Most commonly, these cats have a strong hunter instinct. They like to chase around rodents and insects, primarily because their descendants, the American shorthairs, were kept to handle pest problems.

If you notice your cat showing hunter instincts, chances are that you have an American Wirehair.

Step 4: They have large, round eyes

Another noticeable feature that can help you identify a Wirehair is their large, round eye shape. Their eyes can have many different colors.

American Wirehairs are medium-sized cats and have a muscular and stocky body. They can weigh anywhere from 6-12lbs, with males weighing more than females. These cats have thick legs and strong jaws due to their natural hunting ability.

Also, you may notice that these cats have heavily padded paws. This is to help them in catching and tightly grasping their prey.

Although the Wirehair has medium-sized hair just like any other cat, upon close inspection, you will notice something different.

Just like the hair on the rest of its body, the hairs in the ears also have a curvy and crimped look. Like its whiskers, this sign can help you identify an American Wirehair from a normal cat.

Just like American Shorthairs, American Wirehairs are known to be adaptable to a number of environments. They are just as comfortable in households with only one or two people as with households with lots of adults and young children.

The Wirehair is also known for its compatibility with dogs and other cats. They will tend to enjoy playing with the other pets as much as they do with their toys.

Thus if you notice that your cat can adjust easily to changes whether it’s an addition of a family member or a pet, you may have your hands on an American Wirehair.

Step 8: Noticing whether your cat is vocal or not

These cats tend to be rather quiet.

The American Wirehair is more of a cat that convey sits emotions through its expressions.

Their vocalization also depends on the situation they’re in. If your cat vocalizes very rarely, there’s a chance that you may have a Wirehair.

Step 9: Look for signs of affection

American Wirehairs are quite affectionate towards their owners and enjoy the company of people. At times, they will follow their family members around the house to keep themselves company.

Although not all Wirehairs are lap cats, some of them will occasionally prefer to sit around with their owners and relax. Despite being naturally social cats, Wirehairs are not very talkative cats.

Showing affection along with other signs could help you identify an American Wirehair.

Step 10: Going the extra mile and getting a DNA test

If you really want to prove that you have an American Wirehair, your best bet would be to get your cat DNA tested. These cats have a dominant gene in their DNA for their curly hair.

The presence of this gene will confirm that they really are American Wirehair.

Take your cat to a vet who will collect your cat’s saliva and use it to test its DNA. This will show whether one or both of the parents were American Wirehairs or not.

Step 11: Asking your breeder for the pedigree of your cat

Documentation is important when you’re buying a cat from a breeder. Especially considering that you’ll likely be paying anywhere between $800-$1200 for your kitten, documentation is the only solid authenticity of your cat’s breed.

When you go buy a kitten from a good breeder, they will almost always provide you with a pedigree that will show you the lineage of the cat.

Make sure that the breeder is trustworthy and the documents are not forged. Having the right documents will be helpful for you in the future.

Step 12: How quickly does your cat learn things?

Wirehairs are smart and curious creatures and they love to learn new things.

They can be taught to scratch a scratching post instead of the walls or sofas. You can also buy them toys that challenge their brains like this puzzle feeder that I bought for my American Wirehairs.

Even though intelligence is not a prominent feature of this cat, it can help you recognize whether your cat belongs to the Wirehair breed or not.

Now that we know how to identify an American Wirehair cat, it is important that we know a few basics of how to care for it.

Given below are some important factors of taking care of an American Wirehair cat.

Grooming and care for American Wirehairs

If you are planning on getting an American Wirehair anytime soon, learning grooming techniques would be in your best interest.

Apart from all the basic grooming requirements for nails, teeth, ears, etc. you must learn how to take proper care of its unique coat to keep the cat in a healthy and clean condition.

Usually, cats with longer and softer coats require regular brushing to remove dead hair and keep the rest shiny and clean. With this cat, however, the scenario is completely opposite. For American Wirehair, the lesser you groom them, the better.

The reason is that the texture of this cat’s coat is different, brushing or combing it can actually damage it. If you do notice your cat shedding more frequently, a bath will help remove the dead hair.

Also, too much bathing will tend to do more harm than good to your cat.

Apart from the maintenance of the coat, you can do the following to ensure your Wirehair stays well-groomed at all times:

However, this does not guarantee that your cat will not develop any health complications. There are two particular diseases that this breed is somewhat more susceptible to than others.

Hypertrophic cardiomyopathy or HCM is one particular disease that affects the American Shorthair breed. And because the American Wirehairs are technically shorthairs with a genetic mutation, they too are at risk of developing this disease.

HCM causes the muscular walls of the heart to thicken that can cause sudden death in some rare cases.

Symptoms of HCM typically include:

Another disease that Wirehairs run a risk of developing is obesity. Obesity is one disease you can prevent by maintaining a proper diet and avoiding overfeeding your cat.

Although the chances of a Wirehair developing any serious health problems are rare, you should still get your cat checked by a vet if you notice a change in behavior.

Wirehairs tend to have a similar personality as that of Shorthairs.

They are an overall well-mannered and affectionate member of the family. And being social cats, Wirehairs enjoy the company of other people as well as pets but are not very talkative.

These cats enjoy the company of their owners, often following them around the house to see what they’re up to.

However, they are equally good at keeping themselves company. Some Wirehairs tend to be lap cats, while others, not so much. Instead, they prefer to relax in a good spot beside their owners.

Most Wirehairs would play well with toddlers and small children as long as they’re not overly aggressive. If you have any other pets, even dogs, these cats will be perfectly fine with their presence.

Some of their favorite games are the ones that intrigue their natural hunting instincts. They like to chase after the lure end of a fishing pole toy, while at other times, they prefer to relax and watch birds out of a window.

Are American Wirehairs Hypoallergenic? The truth is that no cat is truly hypoallergenic. Every cat produces dander which is the main cause of allergic reaction in humans. Although cats who shed less often tend to produce slightly lesser allergies, it cannot be said that yours won’t.

This is because different people have different resistance levels to cats. You might be more likely to get an allergy from one breed but less likely to get one from another. Therefore the best way would be to spend some time with the breed you plan to get and see if it triggers an allergic reaction in you.

As for American Wirehairs, they shed and cause allergic reactions moderately.

How much does an American Wirehair cost? On average, an American Wirehair kitten can cost anywhere from $800 to $1200. The price depends on several factors such as gender, color, pedigree, etc. Make sure that the breeder is trustworthy and the cat is tested for all disease and has all documentation.

Another viable option is to adopt a Wirehair from an animal shelter. There’s always a chance that you may find a Wirehair in an animal shelter near you. By adopting, not only will you be helping the shelter accommodate other homeless animals, but it will cost you much less than buying from a breeder.

Contents show
American Wirehair 101 (Video)
15-Steps to Identify an American Wirehair Cat
Step 1: Look for their distinct wired coat
Step 2: Examine the cat’s whiskers
Step 3: Notice their behavior
Step 4: They have large, round eyes
Step 5: Check their weight and body type
Step 6: Inspect their ears
Step 7: Testing their adaptability
Step 8: Noticing whether your cat is vocal or not
Step 9: Look for signs of affection
Step 10: Going the extra mile and getting a DNA test
Step 11: Asking your breeder for the pedigree of your cat
Step 12: How quickly does your cat learn things?
Grooming and care for American Wirehairs
Health concerns in American Wirehair cats
Personality and temperament
Related Questions