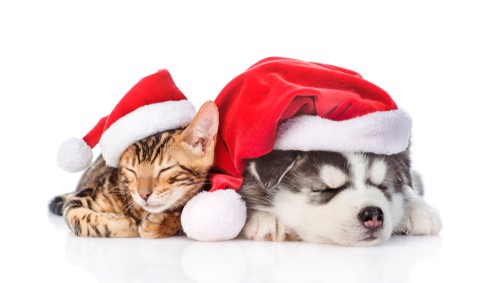 My love for animals, especially cats and dogs, is the main incentive in learning how to introduce a Bengal cat to other animals.

How to introduce a Bengal cat to other animals? That’s not quite difficult. Bengal cats are known for being understanding, affectionate, and easily adjusting to new environments, people, and other animals. It can be done in just a couple of days by making them familiar with the scent of the other animal or leaving the two in a prepared isolated room to kill the awkwardness.

I know of some strongly effective methods that help in making the in-house atmosphere comfortable between a Bengal and other animals.

Techniques for introducing a Bengal cat to other animals 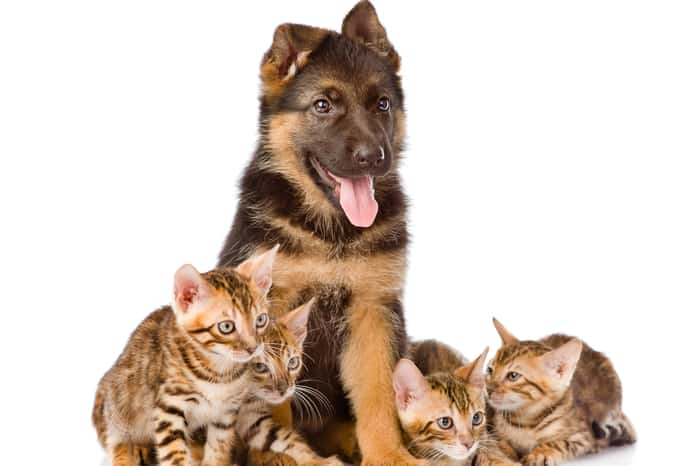 Animals also require time for adapting to new friends, especially when they belong to another species.

While Bengal cats possess the nature of accommodating to other animals real quick, the other animal might not be comfortable in doing so.

This means that although a Bengal is an easy pet to introduce to other animals, precautionary measures need to be taken to ensure utmost animal safety and a relaxed environment.

My idea of getting a Bengal and other animals familiar and comfortable with each other in the house is based on a step-by-step guide mentioned below, so let’s take a look at it.

Room preparation for introducing another animal to Bengals

If you have a dog at home and you’re bringing a Bengal cat, then the most basic thing to do is to prepare a room for the cat.

So for the preparation:

All you have to do is to set the room with stuff that the Bengal cat will love and also feel relaxed around.

A cat house, litter box, cat toys, a cat tree, and other things to make it feel at home.

All these products and many more are suggested in our Bengal cat checklist.

By buying these products:

You’re telling the cat and the other animal that it’s their new home and that the place belongs to both of them and they’d be treated equally.

This sense of security is necessary to provide as otherwise, it would add to the tensed atmosphere due to the sudden introduction of two animals in the same house.

The scent technique for introducing another animal to Bengals

This technique works wonders with every animal, especially dogs, as they are highly sensitive to smells and particular scents.

Introduction of a Bengal to a dog: What to expect? 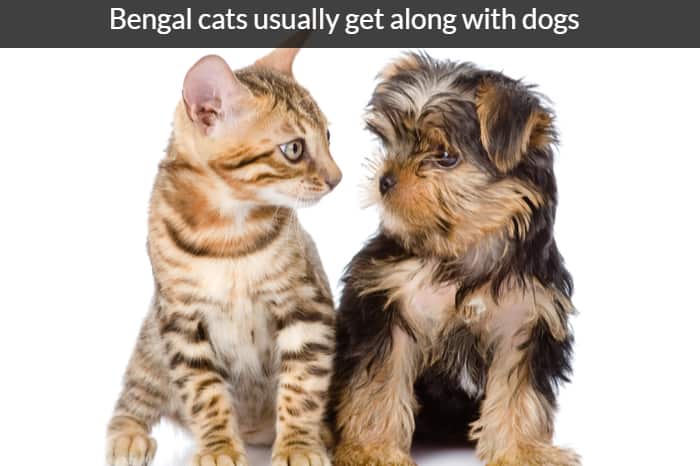 We all know that dogs are very friendly by nature, but it’s only meant for the people whom they know or live with.

There is no denying the fact that cats and dogs are said to be soul enemies since forever.

But when it comes to introducing a Bengal cat to a dog for living in the same house, the situation is a lot different.

Here is what you should expect and do while making the first move for the introduction of a Bengal to a dog.

Importance of comfort zone for a Bengal and another cat

My experience with Bengals and other cats is somewhat similar to that of a dog.

It’s easy to assume that whichever breed the cat belongs to, they will get along really well as they’re the same animal.

Unlike Bengals, other cats are usually quite possessive by nature and do not like to share their owners or house space.

When you try to introduce a Bengal cat to another cat, consider it to be a non-friendly encounter.

You should remain prepared for things like straight ears and raised legs that cats do to express nervousness or awkwardness.

The bottom line is:

It’s really important to keep these kinds of things in mind otherwise, you never know, both the cats might engage in some kind of verbal or physical fight also.

So let them be, don’t try to push both to become friends and just watch calmly how they react to each other’s actions and meows.

Rules for bringing a Bengal cat into a new home 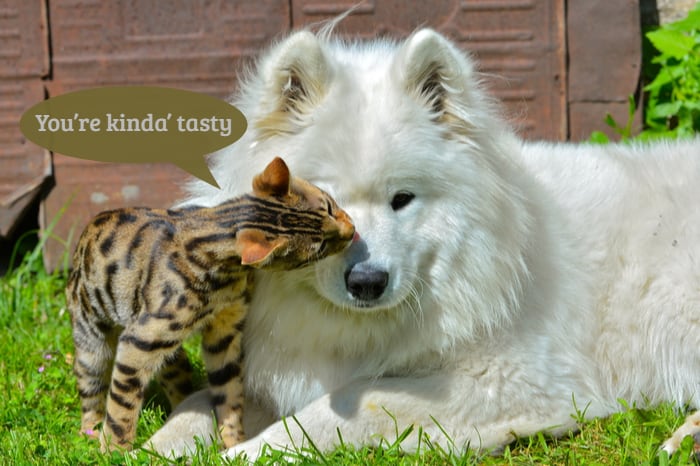 Now that you know how Bengals and other animals are supposed to react differently for the first time introduction, it’s better to work on some rules which should be followed for entering the cat in the house.

Rule no. 1: Bring the cat in a box or house so that it does not feel threatened by the new environment, people, and animal

Rule no. 2: Take it to its own room set up with toys and litter box etc. to make the process less stressful

Rule no. 3: Let it wander around without putting any restrictions

Rule no. 4: If the other animal wishes to stay just outside the room and observe, let it be

Rule no. 5: Cuddle the cat more often to make it feel secure from the strange surrounding

Rule no. 6: If the cat does not want to have food or water, don’t force these things on it

Things to know before introducing a Bengal cat to another animal

A lot of the precise information has been quoted above that I’ve tried to convey considering my personal experience.

There are still some points left to discuss like things to keep in mind before introducing a Bengal to another animal.

The reason as to why it is important is that you’re bringing in two kinds of animals in the same house to witness a good companionship around and not to increase the tension.

So before you make any move, let’s understand how things would be like once you bring the Bengal cat in the house.

The bottom line is:

The introduction procedure of a Bengal cat to other animals is not that complex if correct techniques are followed by also considering some important dos and don’ts mentioned earlier.

Do older cats take time in accepting a Bengal kitten? Not really.

If there is any time limit for older cats to accept a Bengal kitten, then it’s the same as in any other case.

However, what you need to know and keep a strict check and balance on the encounter of an older cat with a Bengal kitten is that there is no sort of domination happening.

As kittens are normally shy and playful at the same time, older cats do not really like the idea of jumping, climbing, and roaming around freely so they might react aggressively.

How to make the first introduction of pets less stressful? This is one question that is frequently asked by pet owners who plan to bring together two animals under the same roof.

You’re lucky that not much effort requires to be made.

A Bengal cat is very loving and empathetic by nature so it easily adjusts with new people and animals.

So if there is something that needs to be done to make it all less stressful then the focus needs to be more on the other animal.

Again, do not impose both on each other and just watch how the situation unfolds and react only when necessary.

Do Bengal cats attack if they feel threatened with the other animal’s presence? No.

Although Bengal cats are part wild, this certainly does not mean that they are dangerous like attacking someone unnecessarily.

Having said this, no matter what, Bengal cats are animals so they’re meant to be unpredictable and behave differently when they sense danger around.

In order to avoid any sort of accidents, beware of such situations where you realize that both or either of the animals is not willing to accept each other.

How long does it take for both the animals to become friends? In my experience:

It takes a minimum of 2 days and maximum of 1 month for both the animals to happily accept each other as an individual part of the house.

You see, in some cases, the cats get along well the very first day and start playing if they’re both friendly. But some cats and dogs take time but it does not exceed more than 1 month.