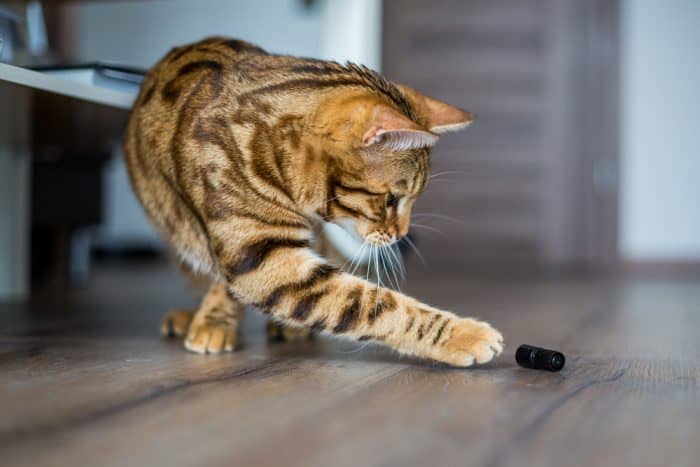 Bengal and Savannah cats have gained quite a lot of popularity for they have a lot in common and tend to share the same attributes.

So, is the Bengal cat the same as a Savannah cat? No, it’s not. Both being a product of crossbreeding a wild and a domestic cat do have some similarities, but they are certainly not the same. To an untrained eye, these two species might look the same, but for someone who knows better, this is not the case.

Both of these breeds while having a lot in common tend to have many differences too.

Common similarities between the Bengal and Savannah cat 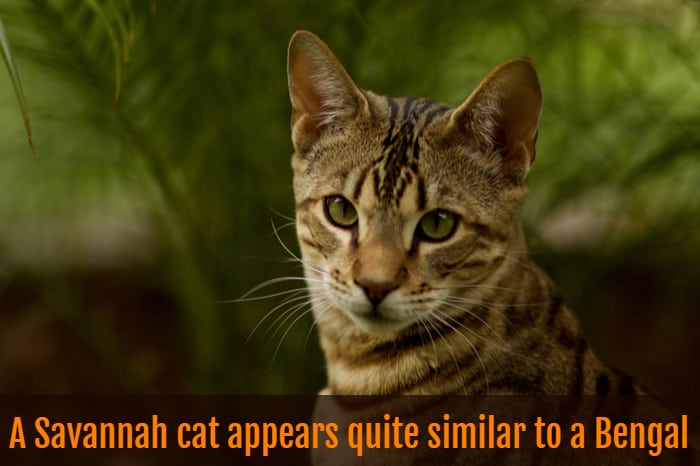 To understand the differences that they have, it is better that we begin by taking a look at some of the similarities that account for this common misconception we have around.

Both these breeds have a deep fascination with water which is very obvious.

Not only would they cause you less trouble during a bath but they in fact, like playing in the water too, unlike most of the other breeds that we know of.

As is a common practice amongst all the breeds, these two like to scratch things a lot too.

From sofas to carpets, you can expect to find them scratching just about anything that they can get their hands on.

Hence, the reason, why investing in a scratch post is most rewarding with them.

They both are attention seekers and are very affectionate to the ones they love.

Their playful and affectionate nature is the key reason why they make such great domestic cats.

Not only their habits:

But even their appearances seem to have a lot in common too.

Bengal and Savannah cats have coats that are:

This may be the prime reason that accounts for all the confusion that surrounds these two breeds.

Since they both are made by crossbreeding a wild and a domestic cat, one often believes them to be the same. But this isn’t so.

Keeping in view the few commonalities mentioned above, would you still go as far ahead as to call them both to be the same?

As similar as they might seem to a layman, they both are poles apart.

What makes the Bengal and Savannah cats different? 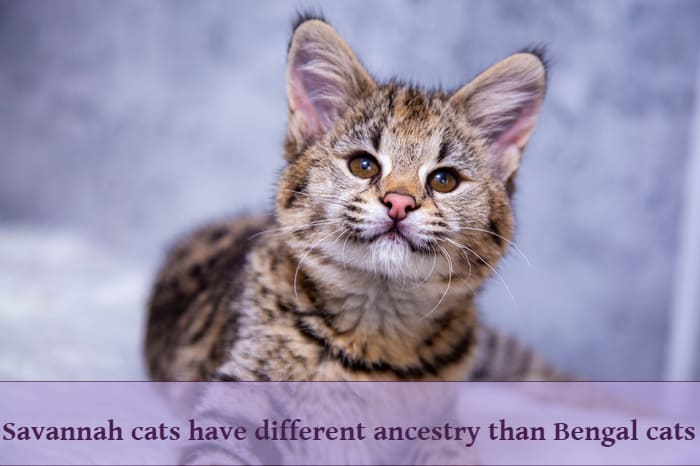 From the ancestral lineage to the health issues they both face, there are many differences that you would come across if you bring these two breeds home.

To help your way to it, we will now be taking a quick look at some of the many variances that are found in Bengal and Savannah cats.

It is true that they both are made by breeding a domestic cat with a wile feline but the types of cats that are used are not the same.

For the Bengal, a domestic cat is made to breed with an ALC, also known as Asian Leopard Cat. A Savannah, on the other hand, is a product of a domestic Persian and an African Serval Cat (ASC).

It is for the difference in their ancestral lineage, that the size of these two cats varies too.

The Savanah being a product of larger cats can reach the size of a golden retriever occasionally which is around 56inches when measured from the nose to their tail.

Since the ASC has African heritage, they are not only bigger in terms of size but can also weight a lot too. This means that you can find Savannah cats that weigh as much as 30 pounds at times.

When compared to the Savannahs, the Bengals are smaller in size.

The ALCs are smaller cats and this is why the Bengals to end up being medium sized.

A female may range between 7 and 10 pounds while for a male the number can go up to 17 pounds commonly.

The Bengal cats keep growing till they reach an age of two.  During this time, they reach the size of a common domestic cat.

As discussed above, since the origins of these two breeds vary, the temperaments they both exhibits tend to differ too.

Savannah being from the wilder and more ferocious breed manifests the same behavior and have often been considered to a dog. This breed, for its similarity to canines, is good at leash training and tends to get along well with the other pets that you might have around.

Bengal cats, on the other hand, are active and equally loyal;  too but require smaller mental stimuli to remain happy.

Both these breeds are active, highly talkative and very friendly in nature.

The Bengal cat can be seen jumping and playing around for hours at a stretch and would just as suddenly drop everything it was doing to come and receive the overdue affection from is the owner.

The Bengal cat craves attention more than anything and would be all too happy to snuggle and lie around in the lap.

Savannahs are a little different in this regard. While they too are known for being very loving and affectionate, they are not such great snugglers. They are good at solving puzzles and can jump as high as 12ft if given the space to explore the skills that have been passed down to them from their ancestors. 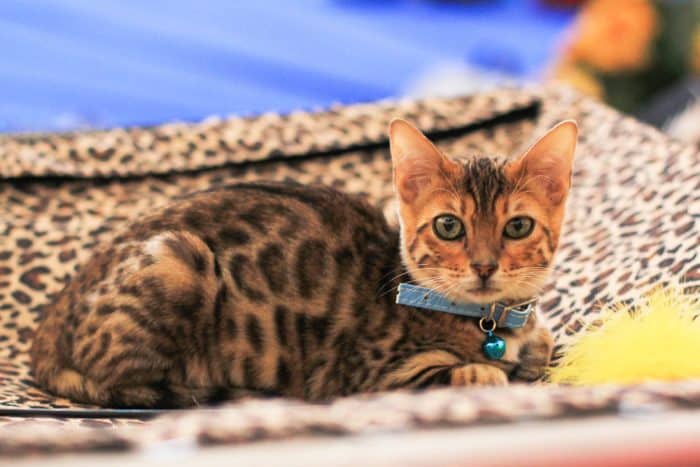 These two cats might look similar to an outsider but a little closer look and you will see that even their appearances are not the same.

While they do share certain similarities, they both look very different from each other. From the size to the kind of coat they have, each one has its own unique personality.

So moving on, what are some of the many ways that make these two breeds differ from each other?

Let us find that out.

Coat: While the coat is short-haired and low-maintenance for both, the difference lies in the details. Bengal cats have marbled or spotted pattern whereas the Savannahs have a pattern that is similar to the ASC with black spots accentuated by a silver, golden or smoke background.

Body shape: Even the body shape and physique they have is very much different from each other. Bengals are medium-sized and muscular while Savannahs are tall and lean.

Ears: Savannah cats have pointed upright ears whereas the ears of Bengal cars are small and round.

Eyes: Bengal cats are known for their “Mascara” eyes. Savannah has boomerang shaped eyes that are gold, green or brown in color with a tear stain that goes from the corner down to the nose.

These both breeds like others that we have in the feline family suffer from health issues of their own.

While most of the problems they face are relatively similar, there are some concerns that lie more with one breed than the other.

For example, Bengal cats are more prone to the retinal degeneration and PK deficiency disease than the Savannahs.

With all this said, it would be safe to say that Bengal cats are certainly not the same as Savannahs cats.

In fact, from our discussion above, these two are more different with respect to their physical attributes than the genetic similarity they share.

So, what kind of pets do they make, you may ask?

Well, it all depends on what you are looking for.

Both were exceptionally good domestic cats are great to have around and would prove to be a good addition to your family.

Depending on what size of cat you are looking for, what attributes and temperaments you would want in it and how much space you have at home, the choice may vary.

How much space do these two breeds need? Owing to their size and temperaments, Savannah cats need more space than Bengal.

This is also essential for the reason that they are more prone to getting into trouble than the other breed in the discussion here.

Are the males of Bengal and Savannahs sterile too? Partly, Yes.

The males that are a part of the earlier generations of these two breeds are sterile as is seen with all the hybrid animals.

This, however, is not much of a concern in regard to their health and characteristics and shouldn’t bother you much as well, until and unless you plan on breeding the felines you have at home.

How can you ensure better health of the litter being produced? By working on a healthier and better gene pool.

When using kittens for breeding, take a look at the ancestral lineage and go for the ones which do not have any direct relatives with the health concerns you are trying to avoid here.

However, this is just a safety measure you can take and in no way guarantees that the cat you have wouldn’t have any health problems.