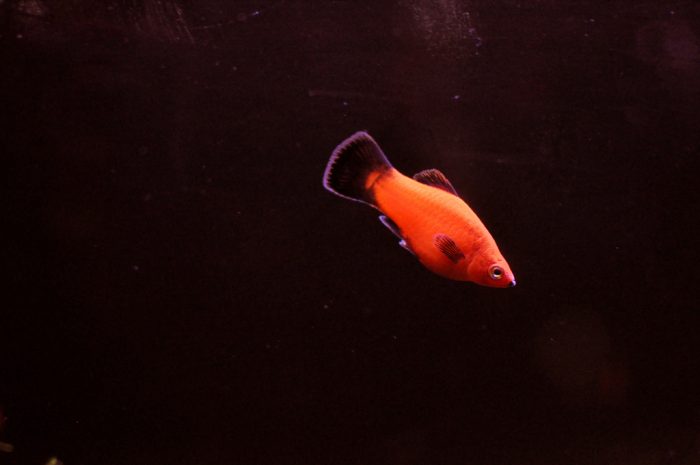 Once you’re done with this article, you will be able to point out the males and females in your mollies!

So, is your molly fish male or female? We can easily identify whether a molly fish is a male or female by merely considering and paying close attention to its physical features and behavior. This is helpful for breeding and collection purposes and it does not require too many scientific processes.

How to tell molly fish gender and how mollies mate (Video)

Let us now learn how to differentiate between male and female mollies easily!

Can looking at them determine whether a molly fish was male or female?

While the male molly fish have elongated bodies, their colors are more intensified for them to attract females for mating and showing other males that they dominate.

The molly fish is one of the most ideal selections when it comes to livebearing species (meaning they don’t lay eggs, but instead, they keep their eggs inside their bodies until it is time to hatch.

A single female molly can produce over a hundred offspring in its whole lifetime and they have the unique ability to store the male’s milt (fluid containing the sperm) in their bodies and keep fertilizing eggs on their own even without a mating partner.

Mollies are classified as part of the genus called as the “livebearers”. They keep the fertilized eggs inside their bodies until hatching time and release them in the water as fry (fish offspring).

They do not pair off when mating, instead the males fertilize any female they chase and catch or come in contact with.

If the fish keeper is already able to identify the gender of the mollies, it is better to group them in their first 8 weeks before the fish attain sexual maturity.

Only then can the breeding process start successfully. Once the female molly fish is fertilized, she keeps the eggs inside her body for about 60-70 days until they hatch. After the incubation period, the female molly gives birth to 10-60 fry at a single time.

There could be times when the female mollies deliver undeveloped eggs along with the live fry being born. But there’s nothing serious to worry about especially if the fish are domesticated. These eggs can simply be discarded.

If it is possible for the pregnant female molly fish to be put in a separate nursing tank, the keeper should consider it. This is advisable to avoid stillbirths or more aborted pregnancies due to the stressed mother.

Mollies can easily breed in any conditions, but the babies need plenty of hiding space if they are to be raised with their parents. Newly born mollies can be placed in separate breeding tanks to lessen the chances of being eaten by the parent fish or fix with traps that allow the new-born fry to drop safely during delivery to help increase the rate of survival for the fry.

The fully grown fry can be taken back to the main tank to interact with the other fish, just make sure they have grown enough that they would not fit into the mouths of the adults.

Are mollies and platies compatible for breeding? No, platies and swordfish can crossbreed while mollies can breed with fellow mollies, endlers, and guppies. Most of the time, molly and guppy fish crossbreeding is unsuccessful.

How long does the molly fish’s pregnancy last? Molly fish gestation periods last around 60-70 days. They have the special ability to store sperm for months and fertilize eggs as often as every 30 days even if there are no males with them.

What can I feed my molly fry? They can’t consume big amounts of food initially, so it is advisable to grind their food flakes to easily feed them, with just the right amount provided at every meal. Remove uneaten food immediately to avoid contaminating their water.

Does the molly fish experience stress during pregnancy? Yes, especially when they are raised together with the male mollies which would chase them most of the time to copulate or mate with them. For this cause, they might have several abortions, stillbirths or underdeveloped offsprings. Aggressive and active as these males are, they should be separated from the pregnant females after mating to avoid stressing the females too much.