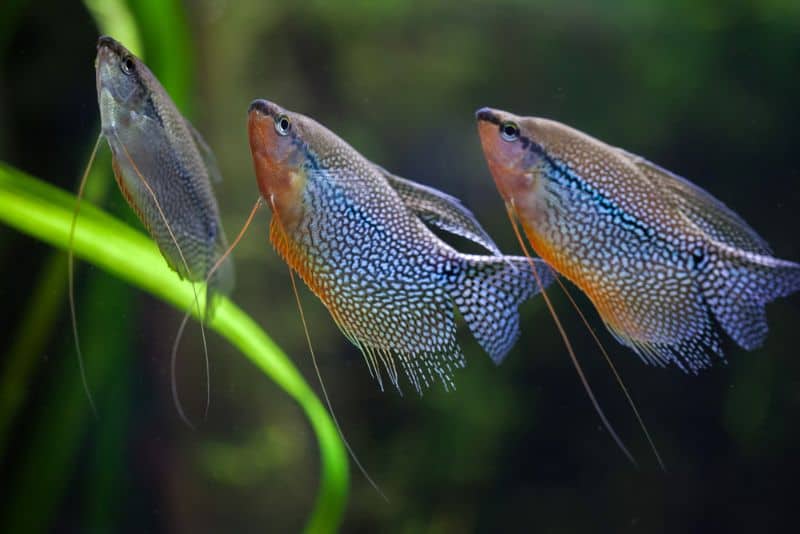 Sexing fish is tricky but important. Finding the gender helps maintain a good ratio in the tank which ensures a peaceful environment and high breeding rate.

Is your Pearl Gourami male or female? Female pearl gourami has a rounder and heavier body than the male. The fins on the male Pearl Gourami are longer, larger, and more angular than those of the female.

Sexing the fish comes with a number of other questions too. There are more connected issues. Read on to clarify all such queries.

Sexing Pearl Gourami is very easy due to their visible physical differences.

Males and females have:

The females are rounder than males. If you look at the male and female side by side, you’ll notice that the female’s body has a rounder belly. Her dorsal fin will also have a rounder shape.

These easily noticeable features will help distinguish between males and female Pearl Gourami without a hassle. However, these features are only noticeable in adult fish. Other things to look out for include behavior and colors.

The males are generally brighter in color than the females. During the breeding season, the males display even brighter hues. They usually get an orange or red spot near their neck. This allows them to attract females.

As in the case of most fish species, the males of the Pearl Gourami family are also more aggressive than the females. If a fish is chasing around the others, this chaser is definitely a male. Similarly, if a group of fish is fighting, they are probably all males. Lastly, the males like to build a circle around an area in the aquarium using plants or by making bubbles. This happens mostly during the breeding season.

How to tell if a Gourami is pregnant

You may have spotted the females but you’ll need a few more indications to confirm if a female is pregnant or not.

Here’s the deal: Gourami is not a livebearer fish type so technically, the fish aren’t pregnant.

However, they do swell up before they lay eggs. The right term to use for that is to say that your fish is gravid. By spotting a gravid fish, you can provide an appropriate environment for egg hatching.

The first indicator is that the fish are mating. If you notice a male and a female staying together a lot, with their bodies touching, they are probably mating. Now that you know of it, pay closer attention to the female.

A gravid female will have a swollen belly, specifically in one spot that is towards the front end. The scales in this area will appear stretched. It may even look like the fish has swallowed something like a small stone.

If you’re seeing bubble nests in your aquarium, that is also an indication of the breeding season. If a female is around this nest, she is probably gravid.

After identifying the males and the females, the breeding process becomes much easier. Breeding Pearl Gourami is as easy as it can be. The fish basically do everything on their own. You just have to provide the right environment.

The first requirement for breeding is that there is a couple. You can also put multiple females with one male.

The male is usually dominant and will attract the females on his own. Most of the work has to be done by the male. You don’t have to provide any breeding box. The male will make a next using bubbles or sometimes, plants. This will give them the privacy they need for reproducing. You’ll know that the breeding was successful by noticing a swollen belly on the female.

For the male to make the nest, you must provide appropriate surroundings. The tank should be in an ideal condition before you start expecting any new fish.

Once the eggs have been laid, the male will take care of them. The eggs will hatch inside the nest that was built by the male. During the process of hatching, the male becomes very overprotective. It is recommended to remove the female from the nest if she doesn’t come out on her own. If this isn’t done, the male may kill the female to keep the eggs secure.

Leave the male in the nest until the hatching actually begins. Once the new fry are born, there is a risk that the male might eat them. Leave the fry alone and let them grow into adults.

Comfortable living space is necessary because:

First of all, the tank shouldn’t be overcrowded. A 20-gallon tank is usually big enough. It should be long enough to provide enough swimming space. Pearl Gourami prefer calm waters therefore, steer clear of air stones and filters.

The water in the tank should fulfill certain requirements. Do not add tap water directly in the tank. Old water is more preferable. The temperature should be maintained between 77 and 82 degrees Fahrenheit.

Pearl Gourami prefer soft water. A pH between 5.5 and 7.5 is what works perfectly for them. Addition of plants is a must. Floating plants and loose branches of aquatic plants are a good option to consider.

Basically: Gourami is a very social fish family. These different types can be kept together in one tank without any worries.

Dwarf Gourami is a famous pet fish type. It is easy to keep and much like the Pearl Gourami, it is peaceful too. These fish are very brightly colored. Only opt for them if you are an experienced aquarist. Lack of care can cause their death.

Another famous Gourami type is Chocolate Gourami. Honey Gourami is another famous name in this family. They have similar requirements to the Pearl Gourami.

Liquorice Gourami is a unique type in this family. It is brightly colored. The behavior of the fish is described as ‘unusual’ by experts.

Is gourami aggressive? Pearl Gourami are easy to keep fish. They are mostly peaceful and social in the tank. This behavior may change around the breeding season. The males become more competitive. If the male ratio in the tank is higher than average, you’ll notice a lot of aggression. If you want to avoid situations like these, provide a big enough tank with more females than males.