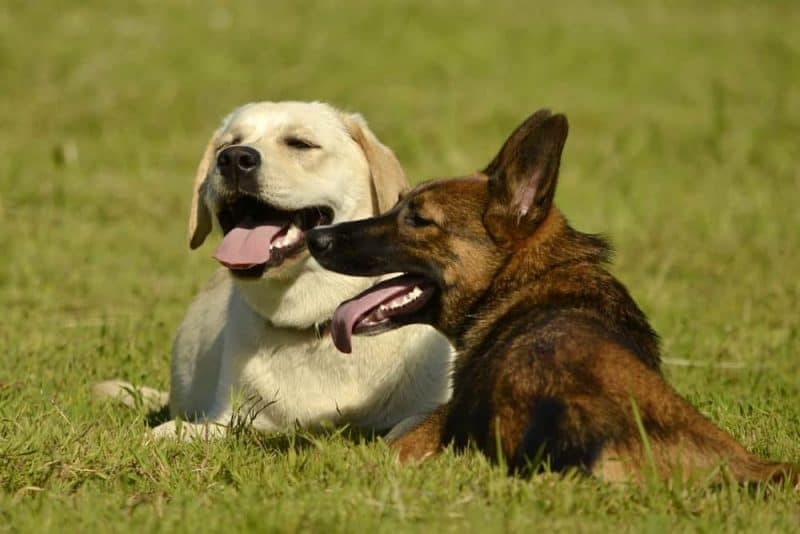 As an animal lover in general, and a dog lover, in particular, this was such a challenging topic for me to write on. But I know it is a popular question that many potential dog owners ask. Being two of the most popular dog breeds, the comparison may often seem very confusing, and not overtly black and white, but that’s just how it is.

According to the American Kennel Club, Labradors are the most popular dog breed, followed very closely by German Shepherds. So, even though it was very difficult for me to decide, most current statistics show Labradors as clear winners, when it comes to being favorite pets. When making a factual analysis, though, the distinction is not that clear.

Even as a first-time potential pet owner, most people have very clear preferences. Even those who don’t have, at least, narrowed it down to two or three favorite breeds. If that is the case with you, and your two options are Labradors and German Shepherds, I’ll make it easier for you to decide through this analysis. My aim is to look at all the practical aspects of owning a pet, so you can make a conscientious choice.

Labradors were introduced in the Great Britain in the 1800s through trading ships coming from Labrador in Canada (hence the name). They are descendants of the now-extinct St John’s water dog. Much like them, their ancestor was also a happy, playful, sturdy, and reliable dog.

German Shepherds, surprise surprise, originated in Germany. Despite looking quite primitive and fierce, German Shepherds are actually a more modern breed than Labradors. They were mostly bred as worker dogs.

Let’s start with their physical characteristics

Interestingly, there aren’t a lot of major differences between the physical characteristics of both breeds. Both Labradors and German Shepherds are large dogs. Labradors are medium-large, weighing on average between 25 to 36 kilos, females being slightly smaller than males. They have a short, thick, silky, and water-resistant coat, which can be black, chocolate, or yellow. Labradors have big broad heads, muscular bodies, and a strong broad tail. Their feet are webbed and well equipped for swimming and walking in snow. 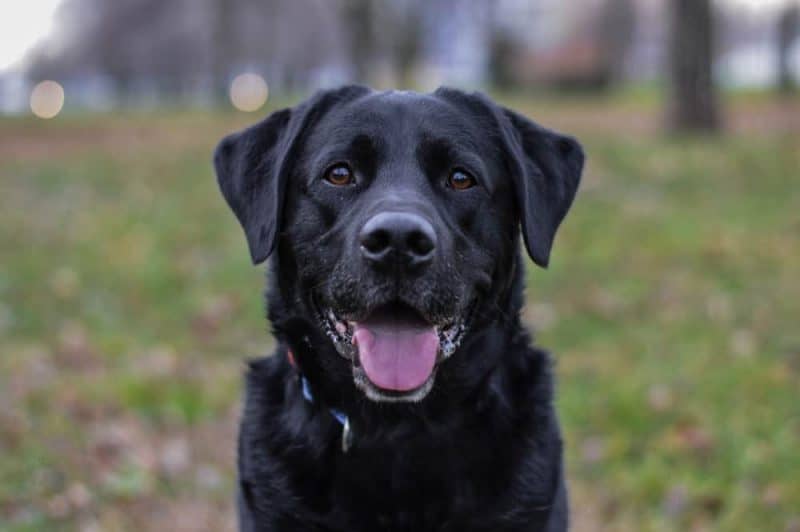 German Shepherds, while also medium-large, can be slightly heavier than Labradors, going up to 40 kilos. They’re longer than they are tall. They, too, have a short and thick coat, with a rarer, long-haired variety also existing. The most popular coat color in German Shepherds is a mixture of tan and black, but it may also be tan and red, or even pure black. Their heads are medium-sized, and tails are long and bushy.

Labradors live on average between 12 to 14 years. They are a healthy breed with relatively few major health problems. Just like other large breeds, they are prone to hip and elbow dysplasia, as well as arthritis. Other ailments they may suffer from include eye and muscle diseases. Some evidences suggest that chocolate Labradors have shorter lifespans, and are more prone to illness than the other two colors, possibly because they are rarer and inbred more frequently.

Slightly less than Labradors, German Shepherds live to be between 9 and 13 years. They, too, are prone to hip and elbow dysplasia as well as arthritis. Another relatively common illness among German Shepherds is a neurological disorder called ‘degenerative myelopathy’.

Again, the differences between both breeds are very few in this department as well. Both Labradors and German Shepherds are known for their intelligence and friendliness. However, there is a distinct difference between these two in the way they express their affections. A Labrador will almost always be wagging its tail around almost everyone, and is famous for quickly becoming friendly even with strangers. On the other hand, German Shepherds tend to be more reserved, and are more wary of strangers. This doesn’t mean that they’re not affectionate. As I mentioned earlier, German Shepherds were bred to be worker dogs, and have probably inherited this reserved demeanor.

Both the breeds are generally not aggressive. They are quite predictable and reliable. But obviously, any individual dog can become aggressive for a number of reasons. Because of the subtle, but important differences in their behavior, these two breeds may be suited to different types of households. While Labradors are a perfect match for households with multiple pets and small children, German Shepherds may be happier in smaller households where they are the only pets. Keep in mind though that neither breed reacts well to being left alone for long periods of time. 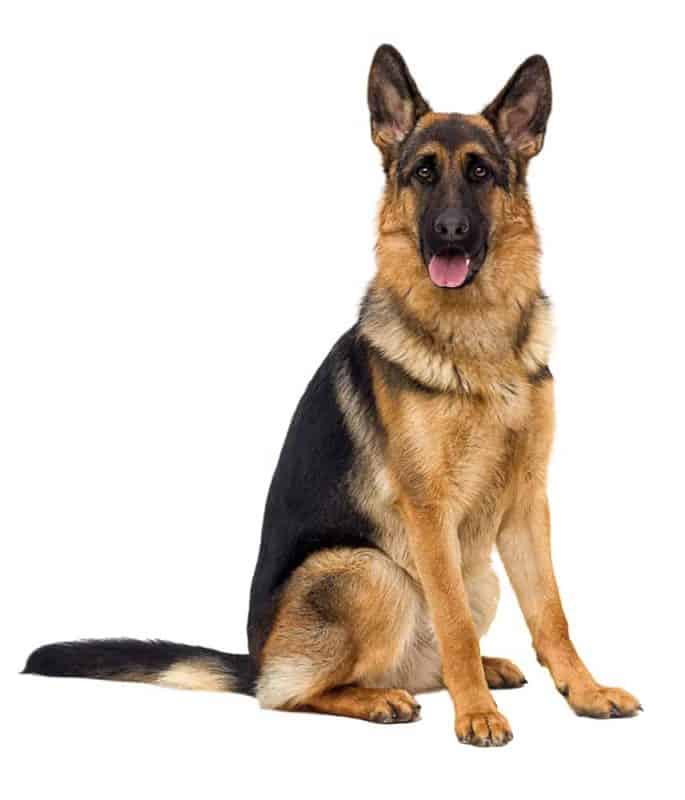 Both Labradors and German Shepherds require relatively large spaces and ample physical activity. As I mentioned earlier, both the breeds are highly prone to arthritis and other joint problems. In order to prevent that from happening, they require regular physical activity. So, if you have a small, cramped up apartment, and work long hours, it would be best to reconsider your choice. Maybe you should go for a less high maintenance dog breed, or even a cat.

Do I need to say it again? There really isn’t a big difference between the price of a pedigrees pup from either breed. Both would set you back roughly between USD 800 to 1000. Training and maintenance would also be almost similar, so in the end, money really isn’t a deciding factor, when deciding whether to buy a Labrador or a German Shepherd.

Opinions on affection are divided. As mentioned above with the temperament, Labradors and German Shepherds have very different ways of expressing affection. Some believe that the Labrador is more affectionate, while others hold the opinion that it is German Shepherds. The latter are probably believers of “actions speak louder than words”.

Unlike Labradors, German Shepherds will probably not constantly wag their tails and try to grab your attention, but they will love you to death. Don’t be fooled by their fierce looks. German Shepherds are gentle and will be particularly loving towards the babies. One potential problem with Labradors is that they tend to be independent at times. They are attention-hungry and in a mood to play one minute, and the next minute may seem completely uninterested. If you think you can’t deal with the mood swings, then maybe Labs aren’t for you.

Neither of the two breeds barks much. However, in comparison to German Shepherds, Labradors are more likely to be noisy. Like I said, German Shepherds are more ‘action’, and aren’t very loud or expressive. Both are fairly calm, and generally do not have anger issues. However, German Shepherds are extremely territorial by nature, and may not take sharing their space too well. Because of this, they are also quite prone to biting. Be rest assured though that the bite will never be an unprovoked one. In terms of training, again both are fairly easygoing, but Labradors take the cake on this one.

Which dog is more protective?

Here, German Shepherds are a clear win. They are extremely loyal and protective. Not that Labradors are any less loyal, but they tend to get easily distracted, and may not be the best choice if you want to have a guard dog. On the other hand, German Shepherds, as I mentioned before, are territorial, and would not let go of any potential threats.

German Shepherds have been trained as fighting dogs, and are quite good at it. They have keen hunting instincts, unlike Labradors, who really aren’t all that interested in hunting and fighting. On the other hand, Labradors are far more curious and inquisitive of their surroundings. They will probably explore your entire house on their very first day -a trait not characteristic of German Shepherds.

So, what is the final verdict? 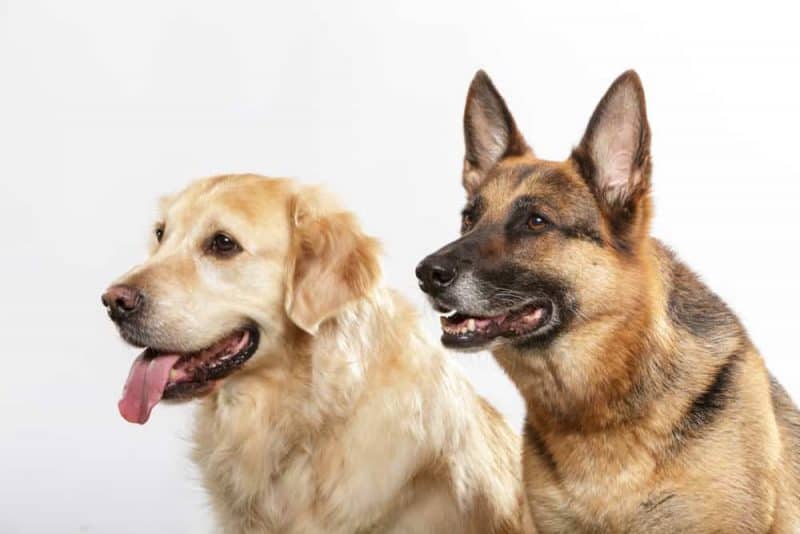 Making a comparison between Labradors and German Shepherds, and determining a clear winner is very difficult. They have many similarities, and only a few distinct differences. Let’s summarize the main traits.

My final verdict is that both Labradors and German Shepherds are amazing dogs, and would make amazing pets. If you’re looking for a guard dog or a hunting partner, German Shepherd would clearly be a better choice for you. However, as a family pet, Labrador narrowly wins at this comparison, for me.

Contents show
Where did both the breeds originate from?
German Shepherd VS Labrador Retriever (Video)
Let’s start with their physical characteristics
Average lifespans and health problems
Temperament
Which of the two needs more physical activity?
Which of the two will be heavier on the pocket?
Grooming and maintenance
Which one is more playful and affectionate?
Barking, anger, and trainability
Which dog is more protective?
Curiosity, and the urge to hunt
So, what is the final verdict?