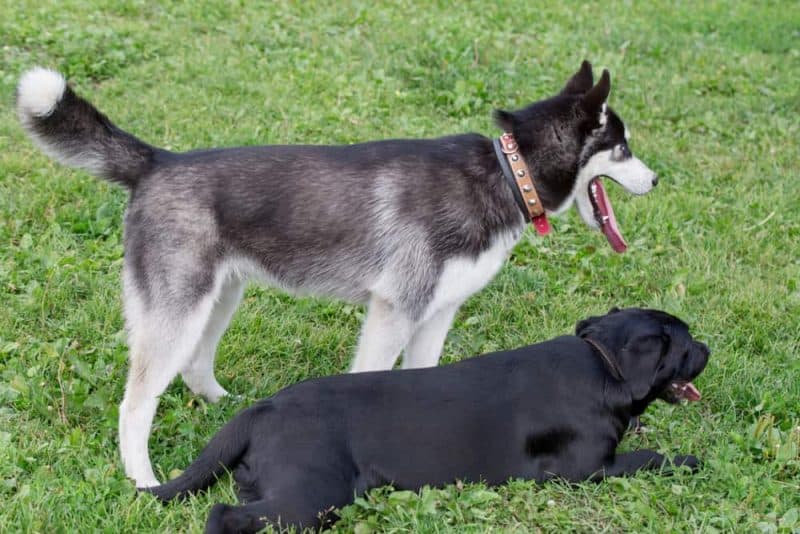 Would you rather have a dog with a smiley face, or would you instead prefer one that looks like a majestic wolf? Well, if I could, I’d keep one of each. But it’s no joke maintaining even one pet, let alone two. Between Labrador Retrievers and Siberian Huskies, which breed would make a better pet?

It’s hard to give an ultimate answer to this question. Both Labradors and Huskies are amazing dog breeds, and both make wonderful pets. There are distinct differences in their characteristics and personalities though, which might help you decide which one is better suited for you. For me, it’s the Labrador, mostly because it is extremely chilled out.

Even though I have always absolutely loved Huskies, I would still get a Lab if I can keep only one dog. Why? I’ll elaborate in my analysis below. From physical characteristics to maintenance to temperament, I have tried to make a thorough comparison. So, it is easy for anyone reading this analysis and decide which breed they want.

Where did both breeds come from?

Labrador Retrievers hail from the Labrador region in Canada. While they may have been around as early as the 1700s, they were not introduced to Europe until the 1800s. Soon after their introduction, they became immensely popular. Descendants of the St John’s water dog, Labradors were perfect sporting dogs and perfect pets, and quickly gained popularity. Today, they are the most popular breed of dogs.

In contrast to Labradors, Siberian Huskies are a relatively ancient breed, with their history going back over 4000 years. It is believed that they were bred by the ancient natives of Siberia as hunting dogs. Back then, the climate of Siberia was probably not as cold and harsh as it is today, and these dogs were mainly used for hunting deers as a source of food. Over time, with the changes in climate, the breed has also evolved to adapt itself perfectly according to the weather.

Both Labradors and Siberian Huskies are medium to large dogs. Interestingly, while Labradors are actually bigger and heavier, Huskies can appear to be bigger, thanks to their furry coats. On average, Labradors can be anywhere between 25 to 36 kilos in weight. The males are generally larger than females. They have short but thick coats that can be black, chocolate, or yellow. Labradors have folded ears, big heads, big eyes, strong tails, and muscular bodies. Their feet are webbed and well suited to swimming and running in fields.

Huskies weigh much less than labradors, between 20 to 27 kilos on average. Again, males are larger than females. They have long, straight, and thick coats, and a curled bushy tail. Their coat colour is highly variable and can be anywhere from black, white, tan, red, or even blonde. Huskies have the most beautiful blue or brown coloured eyes, and some may even have one of each. They have pointed ears and long muscular bodies. An interesting thing about Huskies is that they don’t bark -they howl! 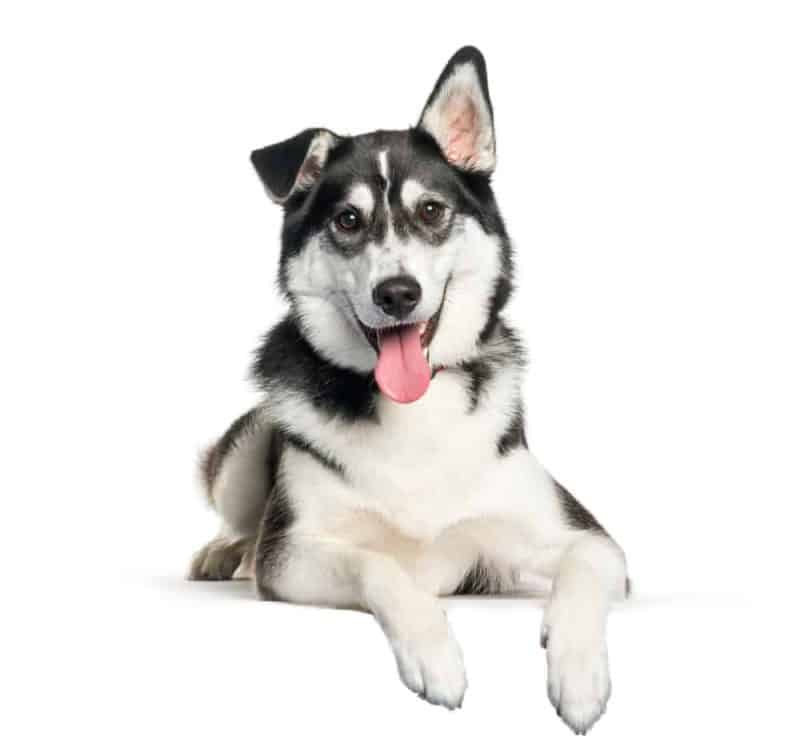 Health, and the need for physical activity

Both breeds have roughly the same life expectancy of between 12 to 14 years, but Huskies generally tend to live a bit longer than Labradors. They both are overall healthy breeds with relatively few major health concerns, but each comes with its own set of potential health risks. Labradors are mainly prone to hip and elbow dysplasia, as well as arthritis. They may also suffer from a condition called ‘exercise-induced collapse’ in which their bodies heat up in response to exercise, they become disoriented, and may even collapse. They may also develop eye and muscle diseases. While also big in size, interestingly, Huskies do not commonly develop bone and joint diseases. The two most common health concerns with Huskies are seizures and genetic eye diseases.

Labradors are sporting dogs, designed to fetch game after it has been shot. Huskies are most suited to pulling heavy objects such as sleds on ice. Because both breeds are designed for heavy physical activity, they cannot withstand a sedentary lifestyle and require at least an hour to 90 minutes of exercise daily. While Labradors may enjoy a game of fetch in the park, or running through lakes and fields, for Huskies, the best form of exercise is running and jogging.

Which breed is more expensive?

Overall, Huskies can be a bit more expensive compared to Labradors. Buying a Labrador or a Husky would roughly cost approximately the same, though Huskies may sometimes be heavier on the pocket since they’re not always easily available. Both require regular grooming and high quality food. In addition to these things, Huskies may also require constant air conditioning if you live in a warmer climate since they are not designed to withstand very high temperatures. At the end of the day, a Husky may just add significantly to your electricity bill because of this. Now that’s something I definitely cannot afford at the moment.

This one we’ve already somewhat covered in the previous two sections. Both breeds require regular grooming and are relatively high maintenance. While you may think that having a Husky would mean finding hair everywhere in the house, it is in fact not the case. Huskies do have long hair, but Labradors have a thicker coat and shed a lot more. This doesn’t mean that Huskies don’t shed. They also shed considerably more than some other breeds, but just not as much as Labradors. Both need regular baths and grooming. In this department, I’ll rate them both roughly the same.

Who is more playful and affectionate? 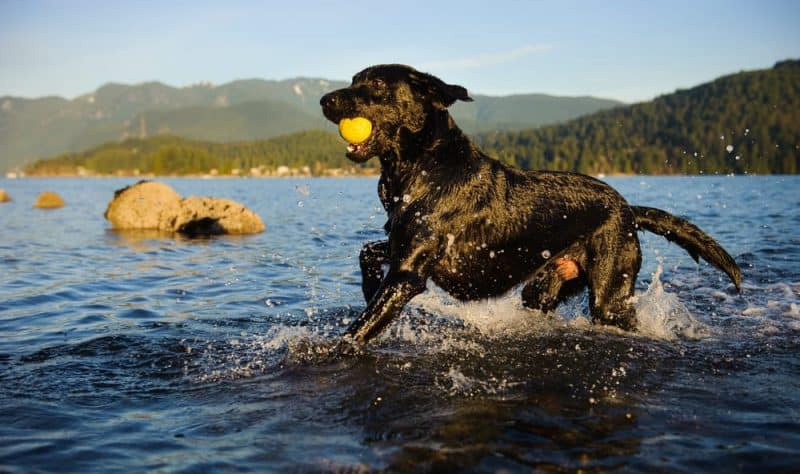 Labradors win this one too. It’s not that Huskies are not playful and affectionate, it is just that competing with Labradors in this department really is tough. Labradors are famous for their happy, cheerful natures. They would absolutely love it if you would want to play with them all day long. They are full of energy, and that can even be a problem on occasion. For instance, Labrador pups would chew through pretty much everything at home if you don’t provide them with lots of chew toys and activities. Huskies also love to play, but definitely do not have the energy level of a Labrador. They are also playful, but can sometimes get a bit aggressive, owing to their hunting instincts.

As I said before, both Labradors and Huskies are generally very cheerful dogs. They are both predictable, and neither may exhibit random outbursts of anger. But Huskies can get a bit noisy for some people to tolerate. They love to howl and sing. They also love to dig holes, and may even attack other small animals that you may have in the house. On the other hand, Labradors may occasionally bark when very excited but won’t do it all day long. They also tend to get along well with any other pets you may have, and definitely won’t try to kill them (hopefully).

Which of the two is more protective?

Both breeds are highly intelligent. They will love you to bits. Whether you own a Labrador or a Husky, both would demand constant attention and company, and are not well suited to being left alone. Labradors are mild and gentle in temperament, and do not get provoked easily. They are protective, but if you are thinking of keeping one as a guard dog, that may not be a great idea. Huskies have a more protective nature compared to Labradors, but they, too, are not made to be good guard dogs. Why? Because they, too, are probably going to try to befriend anyone who shows affection towards them, and may not show the fierceness and aggression required from a guard dog. If you are looking for a guard dog, maybe consider a German Shepherd instead?

Which breed is more curious?

Another department that is a draw for me. Both Labradors and Huskies are very curious and inquisitive by nature. They love to explore, and they love to make new friends. The only major difference here is that Huskies may not always react in a seemingly friendly manner, and may scare some people. It is not because they are aggressive. They are working dogs, and hunters by nature. Their way of showing their curiosity and exploring may not sit well with everyone.

Let’s look at a brief summary of everything I’ve elaborated on so far.

Based on the above comparison, I guess it is quite clear why I have a slight preference for Labradors over Huskies. Again, I would conclude by saying that they are both wonderful dogs, and make excellent pets. I have tried to strictly stick to facts, but hey, human bias is hard to eliminate! When you head out to get a pet, always weigh all the pros and cons carefully before making a decision.