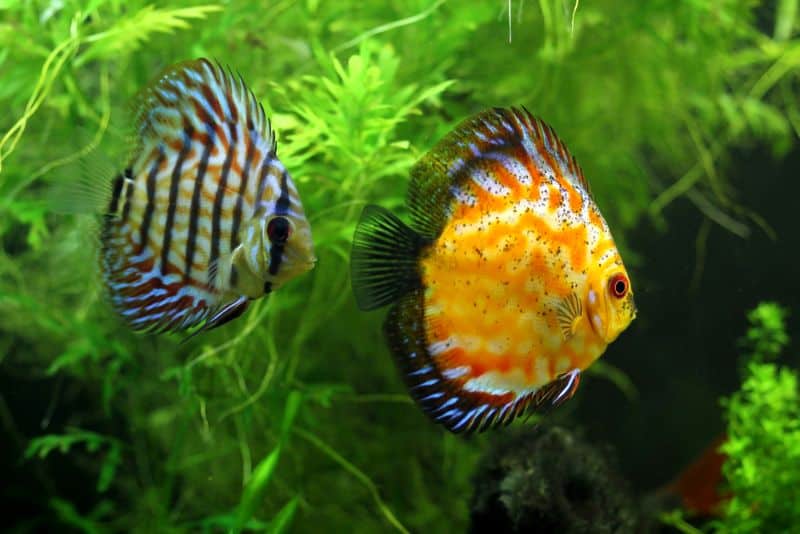 What’s the issue that causes large white spots on discus fish? It is definitely something to worry about. Each spot is actually a tiny parasite called protozoan. The white spots are the parasites’ bodies that have attacked and gotten attached to the fish’s body.

Keep reading to find out how to treat affected fish and protect other fish from catching the same disease.

The appearance of white spots on the fish’s body is called Ichthyophthirius, or Ich. It is caused by parasite infestation in the aquarium. Once these parasites have attacked the aquarium, they quickly reproduce. The fish is then attacked.

The parasites may attach to the body alone or in groups. If multiple parasites group together, the effect is worse. The spot sizes may vary depending on how many parasites have attacked the body. Usually, these spots are the size of salt or sugar grains.

Ich is caused only if the fish is weak. Stressed or sick fish are usually more prone to attacks by parasites since such fish don’t have the physical capacity to fight back. Parasites also reproduce at a very quick rate. Ich is contagious since parasites can easily travel from one fish’s body to another.

The white spots are actually created when the parasites have created a home on the fish’s body. After the attack, the parasites keep digging into the skin. They then create a home under the first layer of the body’s skin. This is the mature stage in a parasite’s life cycle, hence, the parasites are very strong when they have attacked the fish.

Once the parasites are done eating up the fish from inside, they release themselves and drop off in the water in the form of a cyst. At this stage, this cyst bursts open to release many more parasites. Now, your other fish are at risk whereas the previously attacked fish might be on the verge of dying.

The appearance of white spots on the body of discus is the biggest sign indicating Ich. However, since it is a very severe disease, it is better to look out for signs that appear in the early stages of the disease. White spots that look like salt or sugar grains are the biggest indicators but they are also a sign that only appears when the situation has gotten very bad.

During the early stages, your fish will show signs of irritation. It will be feeling itchy so you’ll notice the fish scratching itself against objects in the aquarium.

Weak or sick fish are automatically an easy target. Look out for such fish. If your discus were otherwise alright but their health seems to be deteriorating now, it could be a sign of Ich too. Affected fish are lesser active and start getting weaker gradually.

Another prominent sign of the disease is a loss of appetite. Your fish will tend to hide in shaded spots. It will prefer staying alone and won’t move around as much. Their feeding schedule will mess up as well. Affected fish stop eating regularly. Swollen gills and an overall pale appearance also indicate early stages of Ich.

How to prevent this disease

To keep your fish from catching this fatal disease, the best path is to adopt prevention. The reason why discus are so sensitive to Ich is because they can easily fall sick. Discus get stressed very quickly which leads to sickness and hence, they become an easy target for parasites.

The first step to preventing such an issue is to provide optimum conditions. Make sure your discus are as healthy as possible so they aren’t easily attacked by parasites. Keep them with peaceful tank mates, provide the ideal water parameters, and feed them regularly to prevent stress and sickness.

Keep the tank clean at all times. Regular water changes are necessary to prevent any sort of sickness in discus. 25-50% of the tank water should be changed weekly and the tank should be cleaned too. Keep the ammonium levels zero at all times. Maintain a slightly acidic pH from 6.0-7.0. Lastly, do not put in any new decorations without sterilizing them first.

Once you’ve spotted the white spots, you need to immediately start treating the affected fish, or else it could die.

Medicinal treatment for Ich can be bought from any fish store. Since the disease isn’t rare, you will easily find a treatment for it. The only way to make this medicine effective is by using it regularly. A couple of uses will make the white spots disappear because the parasites that were on the external body will be killed.

Is Ich contagious? Yes, if one fish is affected by parasites, all other fish in the aquarium are at a risk too. I’d recommend you to quarantine the affected fish. Raise the water temperature of the quarantined tank to 90 degrees Fahrenheit to kill the parasites. Also, change 50% of the water in the quarantine tank every day.

Can white spots cause the death of my fish? Sadly, yes. If Ich isn’t treated soon enough, the affected fish will die. Not only will the attacked fish be internally eaten, but the parasites will also reproduce and attack other fish in the tank. Therefore, untreated Ich parasites can cause all your fish to die eventually.