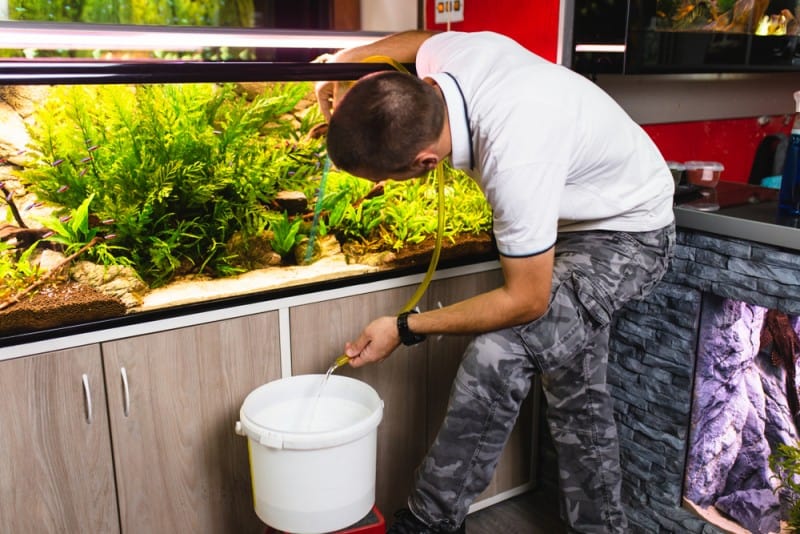 So you’ve decided to change the water of your fish tank.

But you recently read somewhere that you should let the water ‘sit for a day’ before using it.

Do you really need to let fish tank water sit for a day?

The answer is both yes and no. If you’re using tap water, then yes and with some extra precautions. And no, if you’re using some other water.

But this answer’s too vague. And you still might be pretty confused. If you are, there’s no need to worry as we’ll discuss this in proper detail in just a minute.

So if you’re ready, let’s get into it!

Why do you need to let water sit for a day?

Allowing water to just sit for a day doesn’t really seem to make any sense. However, there’s a really important reason behind this.

Tap water tends to contain a number of harmful chemicals. And although these might be harmless to humans, they can be pretty disastrous for fish.

Since fish are such delicate creatures, they need water that is completely free from any sort of additional chemicals that might otherwise cause them harm.

One way to do so is to let the water sit for a day. By doing this, most of the chemicals evaporate naturally making the water safe for fish.

However, there’s more to making the water safe than just letting it sit on its own. Let’s take a look at the proper way you should let water sit.

How do you let the water sit the right way?

Our goal is to remove the extra chemicals from the water, but these chemicals simply don’t evaporate on their own.

So, the proper way to let water sit is to fill your tank with water and then aerate for at least 24-48 hours by using a water filter so that the chemicals can fully evaporate.

Aeration basically causes the dissolved chemicals to come in contact with the oxygen bubbles and rise to the surface of the water where they can escape into the air.

If you don’t have a water filter, you can also aerate the water using a simple technique that requires just two pitchers and some water.

Fill one pitcher up with water and place the other one on the ground. Hold the pitcher with water high above and slowly pour it into the pitcher that’s placed on the floor.

Through the process, the water picks air on the way down which provides a similar effect to that of a water filter. However, you might have to repeat it several times for it to actually have any effect.

However, you should still remember that even aeration doesn’t remove all the harmful chemicals in tap water and you might need to resort to other options.

Reason why you need to let tap water sit

The reason you need to let tap water sit is that it contains chlorine and chloramines. Because of their minuscule amount, they’re perfectly safe for human consumption.

However, these small amounts can be fatal for small fish. They can cause symptoms in fish like rapid or quick breathing, redness around the gills and signs of fish struggling to breathe.

If you see any of these symptoms, chances are your fish are suffering from chlorine poisoning and you need to change the water immediately.

Another reason for letting tap water sit is that it helps the water to stabilize. Tap water tends to contain carbon dioxide which can mess with the water’s pH. A sharp change in the water’s pH can also be stressful for fish.

How Soon can you add Fish to your New Aquarium ?

Other ways of removing chemicals from tap water

Removing chemicals from tap water by just letting it sit is pretty time-consuming. And just leaving it to sit on its own doesn’t even remove all the chemicals you need to eliminate.

Thus, it’s best if you use other methods along with or in place of letting water sit. Not only will these be much faster, but they’ll also bring much better results.

Here are some other ways of making tap water safe for fish:

Using a water conditioner is perhaps the best way of treating tap water for fish. Liquid water conditioners are able to swiftly remove both chlorine as well as chloramines from the water in very less time.

Not only that, but water conditioners can also remove any heavy metals or chemicals that might be impacting the water hardness or pH. It then restores them to a natural level which is perfect for most fish.

Another benefit of using a water conditioner is that it protects and renews the natural protective layer of skin on fishes that guards them against infections.

Another effective way of removing both chlorine and chloramines from tap water without affecting its pH is using ascorbic acid.

Ascorbic acid is easily available in most pet stores, is much more effective and quicker than letting water sit and is quite cheap as well.

You just have to add a tablespoon of ascorbic acid to a gallon of water and stir it for a while. As it doesn’t dissolve in water, it draws all the chlorine and chloramines to the surface.

More so, it doesn’t mess with the water’s pH or oxygen levels so you can quickly change the water without waiting for it to aerate.

If you can’t use ascorbic acid or water conditioner, another quick way of getting rid of chlorine from tap water is by boiling it.

By boiling tap water for around 20 mins, you can create enough aeration in the water to drive out most of the chlorine, which would have otherwise taken 24 hours if let to sit.

Despite that, you should know that chloramines will still remain in the water as they take much longer to evaporate due to their more stable nature.

Using a UV light for cleaning tap water is also an effective way of quickly removing harmful chemicals from it.

UV light has the ability of getting rid of both chlorine as well as chloramine from the water. Also, UV light can kill bacteria and viruses in the water which might otherwise harm your fish.

However, getting a hand of a UV filtration system or a UV light can be much more expensive than the other methods, but it’s a one-time investment so choose wisely.

Limiting yourself to just tap water is a very big mistake. You must always have different sources where you can obtain water for your fish tank in case of any problems.

Below, we will discuss all the different kinds of options available for fish tank water and which one would suit you best.

Tap water is perhaps the best choice for most aquariums and especially freshwater fish. Not only is it the cheapest source, but its also the one that’s most readily available at all times.

In most locations, tap water has a very suitable hardness and pH and contains very little heavy metals that could otherwise cause problems.

Therefore, the only treatment they require is the removal of chlorine and chloramines by any of the methods mentioned above.

However, in some locations even tap water can have water chemistry that’s very off. In that case, you might need to implement several methods to rid it off anything harmful.

The best combination with tap water would be a water conditioner. These are easily available in most pet stores and are highly effective and quick.

Most water conditioners can correct the water chemistry of even the worst types of tap water.

Despite that, we highly recommend you conduct a test first both before and after using a water conditioner in your tap water to ensure that it’s meeting the requirements of your fish.

RO water is basically a 100% pure form of water without any sort of metals, chemicals or chlorine in it. But as perfect as it may seem, RO water is not at all suitable for fish on its own.

Because it’s totally pure water, its pH and hardness are very unstable and can jump significantly. This is due to the absence of additional minerals, which act as buffers.

A buffer is something which prevents the pH or hardness from fluctuating too aggressively. A sudden change in pH and hardness can be very stressful or even fatal to fish in some cases.

There are water buffers available at most aquarium shops which can make the water more suitable for your fish.

However, you must maintain both the pH and hardness of the RO water every time you do a water change.

Both bottled and spring water is another option for filling your fish tank. These are easily available in stores near you and you also have multiple options to choose from.

Using bottled water is more convenient than dechlorinating the water manually or adjusting its chemistry by adding different chemicals to it.

However, it’s highly recommended to check the chlorine, pH, hardness and other levels of the water you’re purchasing to ensure they’re meeting the requirement of your fish.

But perhaps the biggest downside to this option is its cost. Buying gallons of bottled water is in no way cost-effective, thus this option is restricted to those with smaller aquariums.

In conclusion, letting your water sit a day before you use it is probably up to you. Although it does help you get rid of the chlorine in the water, chloramines are still left. There are many other alternative methods you can use which can rid the water of anything harmful more effectively and in much less time. We have also mentioned other sources of water you can use to fill your fish tank with their benefits and disadvantages, so you can make the best decision.