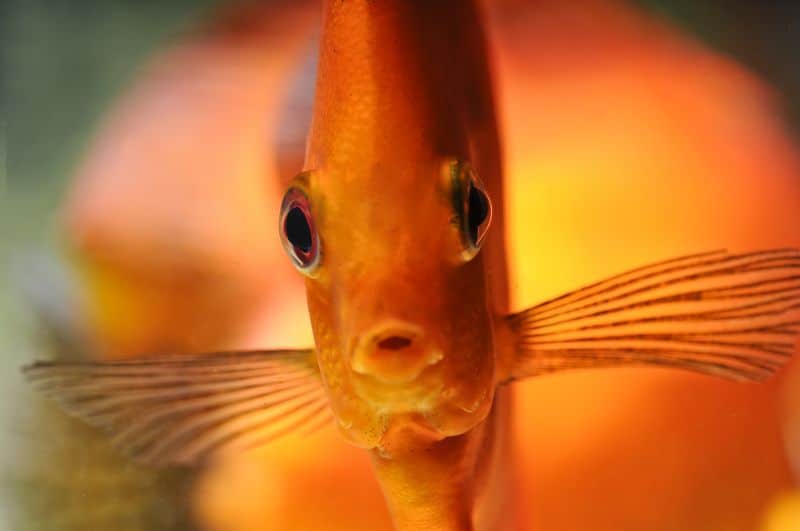 Ever wondered why your discus fish is always hiding? Are you worried about your fish’s diet as it sits in one corner and does not come out even to eat?

So, why are your discus fish hiding? If your tank is established, your fish will hide for a few days and perhaps even darken near black or lose their color. Discus needs a little time to claim the tank as its own and establish the pecking order. Give it a few days to a week to start to explore their new surroundings.

However, monitor it for sluggishness, falling over on its sides and turning a dark gray or blackish color for more than a few days. This means it’s stressing either from the environment or perhaps another fish such as an Angel and they may feel threatened, or the water parameters are not agreeable for them and needs to be adjusted.

You know what to do once your discus settle down in your tank?

Give them a lot of face to face attention, your discus fish loves human interaction. Hence, the discus fish is:

However, you might not find yourself in such a simple situation every time. The discus fish may hide for a greater number of weeks than normal and this is the time when you need to take certain measures:

Why Fish Hide and What To Do About It (Video)

In worse situations your pet might have developed a plague known as the discus plague:

Here is some detail on the deadly; discus plague.

The disease is very common among fishes such as the discus and Angel. However, fishes infected with Discus Plague will not only huddle together in a dark corner of the tank but they will also lose their natural coloring, turn dark, and become reclusive.

Heavy mucus secretions on the skin, accompanied by severe fin rot, scratching or rubbing against objects in the aquarium, and rapid breathing are also characteristic symptoms of Discus Plague.

Upon close examination, the fins of sick fish may exhibit clear, non-pigmented areas where the tissue appears have dissolved. The mucus layer will also appear streaky where the fish has been rubbing against objects.

Even though infected fishes appear to be very sick, they continue to eat, although sparingly. When feeding, they move in a tight school to the food, and retreat together to a dark corner.

Some fish may even lie horizontally on the top or bottom of the tank, trying to hide in the merest shadow!

The plague is caused by a bacterial infestation from any or all of the following bacteria:

This disease is typically introduced into an aquarium by a new fish, plants, decorations, or live food. The carrier is usually not a sick fish, but rather a healthy fish or plant from a tank which harbored the disease in the past.

Fish will begin to display the symptoms described above within 3 to 5 days after exposure. Mature adult fish appear to suffer the most severe symptoms, often dying within the first few days of the disease.

Effective medications include the antibiotics:

These will quickly arrest the fin deterioration as well as reduce the mucous production on the skin. These drugs will not, however, cause sick fish to immediately regain their natural color or cease any “huddling” behavior. Within 7-21 days, however, these symptoms vanish and your fish will reappear at the front of the tank, looking for food.

Concurrent treatment with oxidizing agents, like Potassium Permanganate, will help to keep the bacterial count down (which will aid your fish in its natural fight against the infestation).

Controlling the acidic levels of your aquarium has also proven to be effective in the treatment of Discus Plague. A low pH (5.5 – 6.5) may also prove helpful as some bacterial species are not able to withstand an acidic environment.

Another major question that you need to ask yourself is that are all the fish huddled together, or just some of them? It might be that one fish is dominant and is not allowing the rest of the fish to come out into the open parts of the tank.

Do you see any other signs of aggression, like nipping? Do some of the fish look “faded”? Color loss can be considered a sign of stress.

Sometimes the case can also be that the fishes have recently matured and the wild aspect of having one’s own territory kicks in. Juvenile fishes might adjust to small areas and live in the same tank but matured fishes can find this a difficult task.

Hence, the stronger fishes are able to dominate and take over the face of the tank whereas, your discus fish decided to huddle in a corner and not enter the territory of its counterpart sharing the same aquarium.

To be very precise the following aspects must be looked into if you want your pet to come out in the center and interact with you. Here are a few questions that you may have.

Cohabiting with other fish

Discus fish, like most cichlids, are aggressive towards both, their own and other species. Nonetheless, while they’re small they can cohabit with other smaller fish so that the aquarium doesn’t look so empty.

They can cohabit for a time with:

Catfish like Corydoras or plecostomus are also good for this aquarium set-up.

Caring for their aquarium

If you want to take good care of your discus fish, you should take these tips into account:

As for a conclusive note you need to know that if you see that your discus fish is:

Then know that the hurdling is just a temporary stage of adaptation and your pet will settle down in a matter of days and become the friendly fish you want in your aquarium.

What are the appropriate water parameters for your discus fish? An aquarium for discus fish must have a capacity of at least 300 liters. The temperature must be steady at 28º C (82.5º F); below 26º C (78.8º F), your discus fish will get sick. The water’s pH must be 6, and the general hardness index must be of 5. This means that the water must be soft.

What are the appropriate surroundings for your pet? Discus fish are native of the Amazon River so they require dense aquatic vegetation to take refuge from their sharp, hungry teeth. You should reconstruct this habitat in your aquarium with the appropriate plants.

You should have floating plants and ferns like Slavonia or Pistoia on the surface of the aquarium; they will soften the light from the fluorescent lights, which if they are too harsh are very disagreeable for discus fish.

The aquarium should be lined with pebbles, that is, small stones that have been rubbed smooth by the water currents. Branches without any sharp parts can also be useful. However, there must be enough space left in the aquarium for the fish to swim around freely.