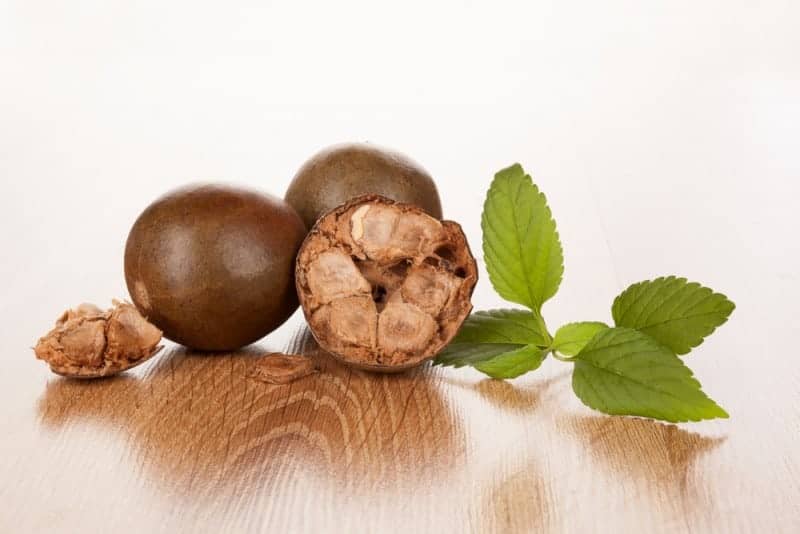 Monk fruit sweetener has gained immense popularity in the health circles. But is it also good for dogs?

If your dog consumed monk fruit, it should not cause any health problems; unless it has been eating in large quantity. However, it should also be noted that monk fruit sweeteners should not be given to dogs, intentionally.

Why shouldn’t dogs consume monk fruit? Are there any alternatives? If you have similar questions jumping in your mind, you should definitely read ahead.

What is monk fruit?

Monk fruit is an artificial sweetener that is great for people that want a low-calorie diet without sacrificing sweetness.

Monk fruit sweetener is created by first removing the skin and seeds of the fruit. And then crushing the fruit to collect its juice.

This juice contains zero-calories and is used in various foods and drinks.

The FDA approved artificial sweetener is 100 to 250 percent sweeter than sugar. Meaning, adding it in smaller quantities gives the same sweetness as does sugar.

There is little research available on the benefits and harms of monk fruit sweeteners in dogs. However, the general consensus is that it should not be given to dogs.

Monk fruit sweetener is up to 250 times sweeter than regular sugar. That means consuming it on a regular basis can cause diabetes and result in obesity in dogs.

Moreover, monk fruit in its natural form contains hard shell and seeds that can cause choking or intestinal obstruction or blockage.

What to do if my dog consumed monk fruit sweetener?

Although monk fruit is not healthy for dogs, consuming it in little quantities poses no significant harm.

If your dog is a bit sensitive, it might vomit or get an upset stomach for a short while.

Therefore, if you found that your dog consumed something that contains monk fruit sweetener, you should not panic.

Observe it for some time for anything unusual, and if everything is fine, then there is no need to worry.

On the off chance, your dog is showing unusual symptoms, you should consult your vet right away. Remember to tell him/her precisely what your dog ate, how much of it, and any other thing that might help the vet in the diagnosis.

Artificial sweeteners are becoming more common in this era of people getting conscious about healthy diets.

And even though these synthetic sweeteners are good for people that are on a diet, but they might not be great for dogs.

Here are the most common artificial sweeteners and their effects on dogs:

Xylitol is a common sweetener used in various sugar-free beverages and foods such as ice-cream, juices, candies, etc.

However, it is extremely toxic to dogs. It can be lethal to dogs, even in small quantities.

Consumption of xylitol can cause liver failure, seizures, and even death.

Erythritol is a naturally occurring sugar alcohol (a type of carbohydrate). Humans have been synthesizing it since the 1990s.

Although erythritol does not cause any serious harm to dogs, it can cause digestive issues if consumed in larger quantities.

Aspartame is one of the most controversial sugar substitutes in the market. Many argue that it causes various health issues in humans as well as dogs. Whereas, food safety authorities do not consider it harmful.

Aspartame has been commercially produced since the 1980s and is not considered safe for dogs. Even though it does not cause serious health issues, it can cause gastrointestinal issues in dogs.

It contains zero calories because the body does not break down most of the ingested sucralose into energy.

Sucralose does not pose any serious dangers to dogs but can cause minor digestive issues.

Stevia is a sugar substitute, extracted from the Stevia rebaudiana plant. It contains 30 to 150 times the sweetness of sugar.

Stevia causes minor digestive problems in dogs. But it is not toxic and does not harm if consumed in smaller quantities.

Saccharin is mostly used in diet sodas and is 300 to 400 times sweeter than sugar.

There have been no empirical studies on the long-term effects of Saccharin in dogs. However, anecdotal evidence suggests that it is not toxic to dogs, but does pose a risk of minor gastrointestinal issues.

Whenever you intend to give something to your dog, remember to read the ingredients. Look for any artificial sweeteners, especially xylitol.

Do not give anything to your dog that you are not sure about.

However, the best way to avoid any health issues is to stick with foods that are specially designed for dogs.

What to do if my dog ate xylitol?

Xylitol is extremely toxic to dogs and can be lethal even in small quantities. In 2015 alone, 2,900 xylitol related calls were received by Pet Poison Helpline.

Therefore, it is necessary that you know what to do if your dog consumes xylitol.

If you suspect that your dog ate something that had xylitol in it, follow the following steps:

Inspection: Look for unusual symptoms in your dog. For example, see if your dog is vomiting, having seizures, shocked, or behaving in an unusual manner.

Call: You should call the vet immediately to get some advice and take your dog to the clinic for a thorough examination.

Syrup: If you, for any reason, are unable to contact your vet or take your dog to the clinic, get some maple syrup or corn syrup and rub some of it on your dog’s gums.

Doing so will increase the blood sugar level, which will balance the insulin generated as a result of xylitol poisoning.

Remember, it is only a temporary solution, and once you see some improvement, take your dog to a vet.

Note: You should not pour the syrup in your dog’s mouth, as it would cause much more harm.

Animal ER: If your regular vet is not open or you are unable to reach the clinic, you can go to your nearest animal ER. Remember to call them on your way, and brief them on the situation, so that things are ready upon your arrival and unnecessary delays are avoided.

Because monk fruit is relatively new in the market, there are no well-known researches studying the long term effects of monk fruit on dogs.

However, some trials have been carried out on a small scale that reveal that monk fruit does not disturb a dog’s insulin levels or blood sugar levels.

Which artificial sweetener is best for dogs?

Artificial sweeteners are designed for human consumption and should not be given to dogs. The reason is that the dogs have all the necessary minerals and nutrients in their regular food and do not require anything extra.

Giving them too much extra human food can disturb their nutritional balance and lead to issues such as obesity and gastrointestinal problems.

However, if you intend to give your dog extra fruit as treats, you can give them healthy fruits or veggies that are good for them. These include banana, strawberry, orange, mango, etc.