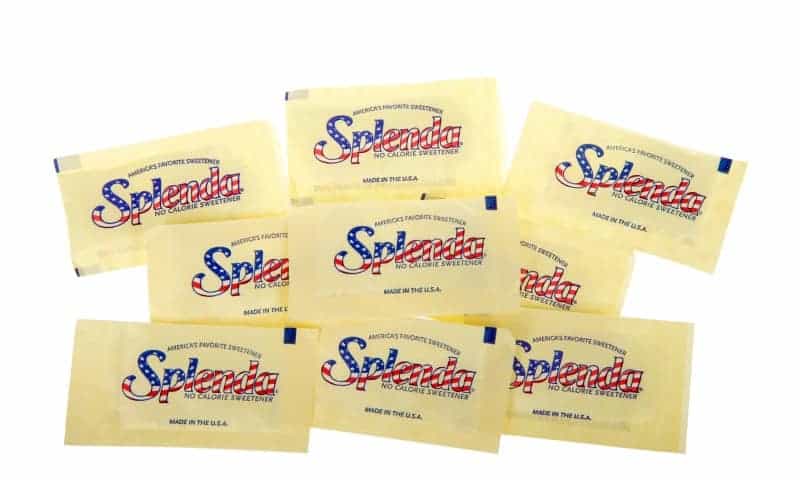 Let us discuss the effects of Splenda in dogs in detail to get a better perspective on this confusing issue.

Splenda is the brand name given to the artificial sweetener, otherwise known as sucralose.

Splenda entered the market in 1998 and is among the five artificial sweeteners approved for use in America.

Splenda falls under the category of high-intensity sweeteners because it is 600 times sweeter than sugar. However, unlike sugar, it adds negligible calories to your diet.

Effects of Splenda on dogs

Unlike xylitol, which is considered seriously toxic to dogs, Splenda is not toxic. Therefore, giving your dog Splenda in minute quantities should have no serious consequences.

However, it has been reported that Splenda may cause minor digestive issues such as diarrhea in dogs.

But even if Splenda is not dangerous, there is nothing that suggests that it is healthy for dogs. Therefore, you should avoid giving your dog Splenda.

It is important to read the ingredients before feeding anything to your dog.

Dog’s have sensitive stomachs, and their digestive system is different from that of a human. So, something that is good for humans to eat is not necessarily good for dogs as well.

Reading ingredients would allow you to know what you are feeding your dog. Things you should look out for include:

Chocolates are extremely toxic to dogs because of the presence of theobromine. While humans can quickly digest theobromine, dogs take longer to metabolize it. This gives theobromine time to build up to toxic levels in dogs.

The level of toxicity chocolate can induce in your dogs depends on the following:

Dark chocolate, cocoa, and cooked chocolate are known to have the highest levels of toxicity. Whereas, white chocolate or milked chocolate has the least.

Furthermore, if a large dog ate a little bite of chocolate, it should not face any serious issues apart from vomiting or diarrhea. On the other hand, a small dog consuming the same about can get seriously ill.

If your dog ate some chocolate and is showing serious symptoms, the first thing you should do is to make it vomit so that the toxic substance gets out of its system. After this, you should take it to the vet for a thorough examination.

Xylitol is extremely toxic to dogs, and even a small quantity can have serious consequences. Xylitol should be avoided at all costs. If you suspect that your dog consumed some xylitol, take it to the vet immediately.

Other artificial sweeteners in the market are not as toxic as xylitol. Nevertheless, they should not be given to dogs. Even if they do not cause any serious problems, they are still considered unhealthy. Your dog can even get minor gastrointestinal problems.

Ethoxyquin is a synthetic preservative added to dog foods. Ethoxyquin has garnered quite a controversial popularity.

Moreover, it should be noted that, unlike humans, dogs stick to the same diet, and if that diet contains even minimal quantity of ethoxyquin, the food can cause serious illness in the long run.

Sweets to give your dog

If your dog has a thing for sweets and you want to treat it, here are a few that you can give without jeopardizing its health:

Fruits are a healthy alternative to commercial treats.

Apples are a great treat for your dog since they contain fiber, calcium, and vitamin C.

But, when giving your dog apples, make sure you cut them into little pieces and remove the seeds and the hard core.

Another natural and healthy treat for your dog is carrots.

Carrots contain fiber and vitamin A that are great for your dog’s health.

You can either give your dog cooked carrots or raw. However, when giving a raw carrot to your dog, remember to cut it into little pieces to avoid choking hazards.

Blueberries are great little treats for your dog. They contain vitamin C and antioxidants that improve dogs’ health.

Studies have shown that eating blueberries in moderation is linked to slower brain aging, which is a good thing, especially if you have a senior dog.

Apart from fruits and vegetables, there are other healthy treats you can give your dog, such as peanut butter.

Peanut butter contains vitamin B & E and healthy fats. It is also a good source of protein.

Yogurt is also a healthy treat for your pup, given that it is plain and does not have artificial sweeteners or artificial flavors added to it.

When giving your dog treats, it is important to remember the 90/10 rule.

A dog’s daily treat intake should not exceed 10% of the total nutritional intake. Whereas, the rest (90%) of your dog’s daily diet should consist of dog food.

What is Acesulfame K? Is it safe for dogs?

Artificial sweeteners such as aspartame and sucralose are known to have a bitter aftertaste. In order to cover this bitter taste, these sweeteners are blended with Acesulfame K.

Studies conducted on the effects of Acesulfame K on dogs have suggested that there are no adverse effects associated with it.

Which artificial sweeteners are good for dogs?

There are five artificial sweeteners in the market approved by the FDA to be used in America; namely:

Therefore, it is best to avoid artificial sweeteners and stick to regular dog foods.

Monk fruit is a naturally occurring sweetener. It is 150 to 200 times sweeter than regular sugar.

Monk fruit is approved by the FDA to be used in America. Therefore, it is safe to use.

However, like other sweeteners, there is a risk of minor digestive problems, such as diarrhea or vomiting in dogs.

Therefore, one should avoid giving any sweetener to a dog at all.