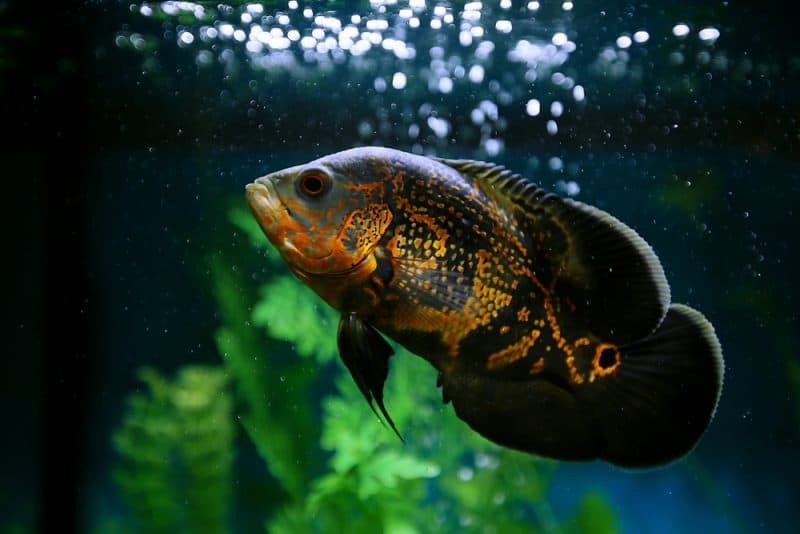 Oscars are not the most aggressive kind of fish out there, neither are they the sharpest species.

Like all animals, the Oscar fish has a dominant nature and they are very possessive when it comes to their territory.

Oscar attacking his own reflection (Video)

Let us delve deeper into this topic and understand thoroughly the reason behind the Oscars’ chasing their own reflections!

When the Oscar fish attack their reflection with mouth open and gills flaring, they see the exact behavior in their so-called opponent and things get more aggressive.

The Oscar opens its mouth as much as it can as this makes them seem more threatening and generally the fish with the larger mouth will win in a dispute over territory.

This kind of behavior is seen more in fish on the verge of spawning and those who have just attained maturity. This is the time when their aggression is at its peak.

Your fish will ultimately calm down, so there is nothing to worry about. If the behavior still bothers you, then try covering the back and the sides of the fish tank with black paper. This will definitely put an end to your Oscars dominancy dispute.

Fish are not vocal and they do not show any physical signs when they are distressed, so it is very hard for fish owners to know if their fish is under stress. This article will help fish owners understand how to identify distress calls from their fish friends.

Fish are creatures that are pros at masking their illness. They can easily hide their illnesses and appear normal and healthy. This trait is actually evolutionary as it protects the fish from being spotted in a pool of fish as an easy catch by predators.

This all, however, makes it difficult for fish owners to take care of their pets.

Just buying and keeping a fish will not help anyone get a better understanding of their behavior. Spending time watching your fish is very important and after a while, you will begin to note their specific physiological behavior that may change when they are under stress.

The most common behavioral questions that will help you get to the root of the problem are given below.

Can I feed my fish anything at all? The correct diet is important for any fish to stay healthy. Fish will not eat if they are not offered the correct diet. Fish spitting out their food is fairly common. Feeding your fish the wrong diet may even cause it to go under stress. If the fish is not eating, it might begin to catabolize its energy stores which will lead to weakness and decreased activity. Down the line, the fish will be susceptible to infections if not fed a proper diet. So it’s very important to research the correct diet for your fish.

What can cause my fish to be distressed? Stress among fish can be caused by a number of things. Things such as a poor diet, poor water conditions, and overcrowding, high concentration of ammonia and nitrates and oxygen deprivation are some of the most common factors. Hence it is important to carry out water changes frequently and to test the water for ammonia and nitrates. Remove any leftover food from the fish tank and do not overfeed the fish.

Can stress kill my fish? The main problem with stress is when it becomes inescapable, chronic and excessive. Fish that are not provided with an appropriate diet, are housed under poor water parameters, are constantly in the state of duress from the aggression of the other tank mate, will not find that stress will eventually make them more adaptable but instead, it will most probably take their life.