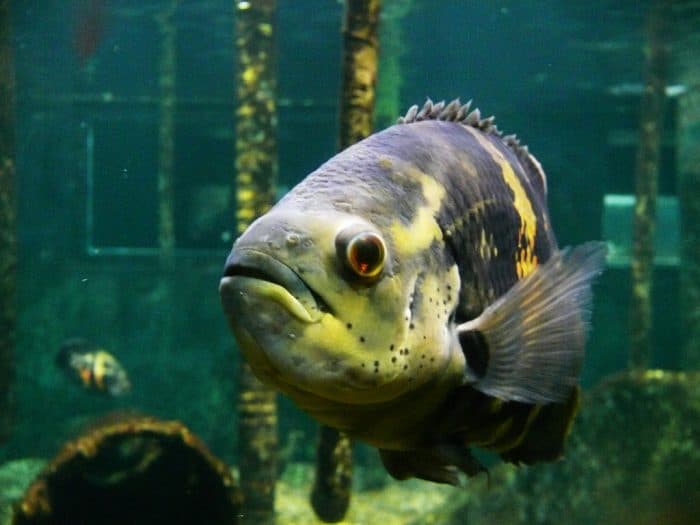 If you find that your Oscar fish has a lump on its lip, there are some strategies to look into it.

Discovering a strange deformation on the lip or fish’s jaw can worry a pet owner. Rest assured, it is one of the flaws an Oscar fish can have which is not dangerous. It could be a minor irritation, nothing more.

Oscar Fish Has Lump on its Lower Lip – Should I Be Worried? Some sort of friction might have caused such a lump. But you do not need to be worried!

Lumps on lips of the Oscar fish is nothing to be significantly worried about.

For one, it is immensely common to find lumps on the lower lip. Usually, it looks like a pimple or a small, round wart. The appearance of it can vary. If it stays small without any considerable growth or discolouration you can calm down; it is completely harmless.

If you still feel worried, you can try to trace the problem back to its source. It is preferable that one shouldn’t act quickly on it by medicating, as the drugs can disturb the bacterial harmony which can cause other problems.

Whereas it is hard to tell why these lumps appear, it is safe to say that sometimes it develops due to the Oscar fish rubbing its lip against surfaces such as the tank’s glass. The rubbing naturally irritates the lip tissue and the effect is a lump growth.

The Oscar fish further likes digging in the sand, investigating the place, or rubbing its lips on a rock for cleaning purposes, removing dirt. All this moving around and cleaning up with the lip area is a very strong reason to believe it is the cause of the lump.

Some fish can develop a small lump and it stays there for the remainder of their life. Once again, as long as it does not seem infected nor grows much bigger, it is nothing to worry about. Also, a redness can occur sometimes as the fish reaches maturity.

There are simple steps to follow in order to eliminate the possibility of an illness of some sort that has struck the poor fish.

You can replace the gravel with sand which is a lot softer and less rough than gravel. Removal of unnecessary objects can be carried out. Hand-feeding the fish is generally advised against as the friction caused by your hand while the fish feed is a possible factor behind the lump. Try feeding the fish in another way with less physical interaction.

Other than the pimple-like lump, can you trace any other abnormalities?

A decease usually comes with several defects. A blemish can even be a result of excessive striking with the lip region if it grows bigger and the redness turns more distinct.

The condition of the tank is extremely important for Oscars. Is the tank clean and hygienic? The importance of having a safe environment in the aquarium would be repeated over and over!

You can find out whether the water is good by taking a small sample to a pet shop and have them examine it there. Otherwise, you can clean the tank as per custom and use a testing kit at home to check for the levels of various chemicals in the water.

Here are a few water parameters that should be followed for Oscar fish:

Should I be worried if the fish has a lump? In this particular case, you needn’t worry much, and you should be patient and observe if the situation is steady. Do not rush to the pet store and vet. Keep the pet patient under observation first at home.

When should I act quickly? If you suspect it to be a tumour. The tumour can have the same shape as a lump but it may not be developed in the same place and it has some dissimilarities. As mentioned previously, the lump tends to look like a pimple and grows in the same familiar place.