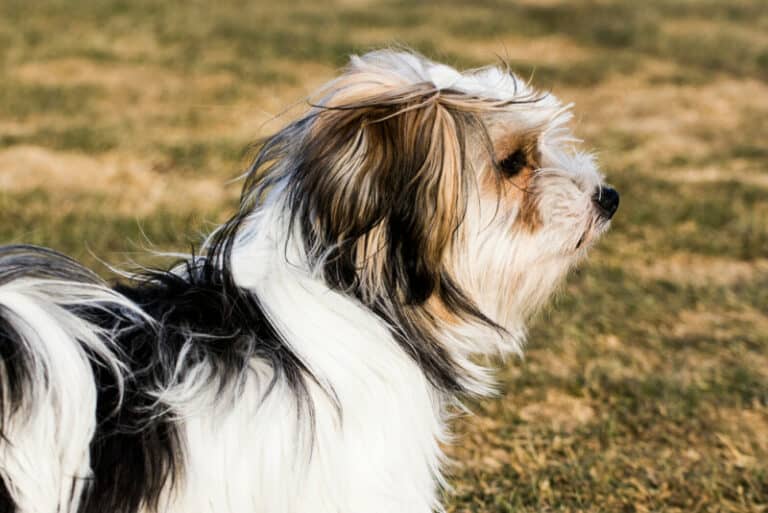 The Yorkshire Terrier is one of the most popular companion dogs. Everyone loves the Yorkie for its size, grace, big personality, and devotion to its owner. It is not uncommon for Yorkies to suffer separation anxiety.

Yorkies are further divided into types based on their fur, and one of the most recently recognized is the Parti Yorkie. This article has all the information you need to know about Yorkies and their types. So if you want to know the difference between a regular Yorkie and Parti Yorkie, you’ve come to the right place.

So what exactly are “Parti” Yorkshire terriers, and how do they differ from regular Yorkies? Let’s find out.

Parti Yorkies are more expensive than their regular counterparts. Breeders are passionate about the Parti Yorkie breed. They put effort into finding the ideal combination of parents and prioritize the dogs’ health and welfare ahead of profit. They select parent Yorkies considering genetics, temperaments, and health tests.

Some Parti Yorkies have parents who have excelled in agility competitions. They are strong contenders and are the most expensive. You won’t find these dogs outside of dedicated breeders, and they cost as much as $10,000

Also, a Parti Yorkie registered with the AKC is more expensive. The AKC only registers purebred dogs and issues a document highlighting the siblings, parents, and ancestors.

The most common Parti coloration is white, black, and tan. The depth of coloration varies greatly from one individual to another. It’s possible to have a Parti Yorkie but have its third color hidden, muted, or negligible, making it look like a regular Yorkie. It’s also possible to find Parti Yorkies featuring one solid color, such as a pure chocolate Yorkie or a blonde one. Solid-colored Yorkies are very rare.

Keep reading to learn about the background, personality, size, and health differences.

The origin of the regular Yorkshire Terrier isn’t exactly clear. Their name suggests that they originated in Yorkshire, England. Yorkies started as an amalgamation of different breeds brought together by accident. During the 1800s, Scottish workers traveling to Yorkshire for work brought a variety of terriers with them as companion dogs.

Originally, Scottish migrants, local mill owners, and farmhands bred the ancestors of the Yorkshire Terrier. The owners used these Yorkies to catch rats on the lands they worked. The resulting dogs were also good at chasing foxes and badgers into their burrows and flushing them out. However, these terrier breeds were different from the Yorkie we know today. They were mostly a mix of numerous other existing Terrier breeds.

There was no special effort to create a breed that would resemble a regular Yorkie during this time. However, many breeders noticed some desirable characteristics in these “Farm Terriers” and eventually made the conscious effort to produce a breed with distinctly long, silky hair. As a result, the ancestors of the regular Yorkie soon surfaced in the first decades of the 1800s.

Regular Yorkies trace their lineage to the Waterside Terrier, a Scottish breed popular for its long, beautiful, blue-gray coat. Some historians also think breeders used the Paisley Terriers and the Maltese to produce this breed.

Regular Yorkshire Terriers are 8 to 9 inches at the shoulder and weigh no more than eight pounds. Yorkies are inconsistent in size, and it isn’t unusual for a single litter to contain one Yorkie weighing less than five pounds, one weighing eight pounds, and one growing to 12 to 15 pounds.

Beware of breeders who have “teacup” Yorkshire Terriers. Dogs smaller than average are susceptible to genetic disorders and poor general health.

Regular Yorkies are wonderful companions, but be careful not to spoil them! Start training when they’re young.

Like all dogs, regular Yorkies need early socialization and exposure to different people, sights, sounds, and experiences. Socialization helps ensure that your regular Yorkie will be a friendly, well-rounded dog.

Regular Yorkies are prone to certain health conditions. If you’re buying a puppy, find a good breeder with health clearances for your puppy’s parents. Health clearances prove that a Yorkie has been tested for and cleared of a particular condition.

Here are some health conditions common in regular Yorkies:

Patellar luxation is a very common problem in small dogs. It occurs when the dog’s femur (thigh bone), patella (knee cap), and tibia (calf) aren’t properly aligned, causing an abnormal gait in the dog. This disease is present at birth, but the misalignment doesn’t always occur until much later. The rubbing caused by patellar luxation can also lead to degenerative joint diseases like arthritis. There are four levels of Patellar Luxation, ranging from temporary joint issues to severe patella misalignment.

PRA is a degenerative eye disorder affecting regular Yorkie terriers. Blindness caused by PRA is a gradual process resulting from the loss of photoreceptors at the back of the eye. PRA is detectable several years before the dog shows signs of early-onset blindness. Reputable breeders get their dogs’ eyes certified annually by a veterinary ophthalmologist.

Portosystemic shunt (PSS) refers to an abnormal blood flow between the liver and the body. That’s a big problem because the liver metabolizes nutrients, detoxifies the body, and eliminates drugs. Symptoms include:

Corrective surgery is very helpful in long-term management, as is a special diet.

Although they enjoy plenty of recognition today, the Parti Yorkie had a rough start. This type of Yorkie Terrier showed up as early as the traditional Yorkie breed. Even during the 1800s, when the development of the Yorkie breed was ongoing. Yorkies with blue and gold color variations were considered the most flattering look in the breed’s early days. Tri-colored Yorkies like the Parti Yorkie were undesirable.

People considered these particolored Yorkies low-quality animals. Many breeders didn’t want their names sullied by these uniquely colored dogs. As a result, the puppies were either given away in secret or put down. At one point in history, the Parti Yorkies were in danger of disappearing entirely. But a surge in popularity years later helped the breed survive.

Euthanizing Parti Yorkie pups was prevalent even in the late 1900s. Things changed in the 1980s when one breeder refused to put down the pups because of their different colors. Soon afterward, the practice of putting down Parti Yorkies became unpopular among Yorkie breeders. Finally, the American Kennel Club formally recognized the Parti coloration as a legitimate Yorkshire terrier variant by 2000.

Despite this, many purist breeders still view the Parti Yorkie as an impure Yorkie lineage. Some believe that pure Yorkie terriers shouldn’t have any white fur.

If you’re looking for a smart, active small dog with a big personality, the Parti Yorkie can be the one for you. While small dogs with big personalities may be a handful for some, they can bring joy to any household.

First-time dog owners may find taking care of a smaller dog breed challenging, but it can be a very rewarding experience. The overall temperament of a Parti Yorkie is content, making it very manageable.

These dogs are affectionate but sometimes snippy, making for an entertaining time. Since they’re small, they fit perfectly on your lap.

Parti Yorkies can bark excessively, and you can fix that by training them from an early age.

Like other Yorkie types, Parti Yorkies are prone to some health complications.

Other medical conditions common to the Parti Yorkie include eye infections, gum, and tooth problems—all of which are treatable by a veterinarian. Before buying a Parti, ask for health clearances for conditions including Willebrand’s hip and elbow dysplasia disease.

Is the Parti Yorkie a better family dog than a regular Yorkie?

The Parti Yorkie can make a wonderful family dog, but there is one caveat: it might not be the right dog for you if there are children in the house.

While Parti Yorkies are fun and playful, they are also very fragile. If you have a Parti Yorkie, you’ll have to ensure that everyone in the house handles them with care.

On the other hand, if your family has adults and older children, I’d tell you not to hesitate! Parti Yorkies can make amazing family pets in the right household.

What’s the life expectancy of a Parti Yorkie?

Parti Yorkies have a life expectancy between 12 and 15 years and need low-calorie, high-fiber dog food to maintain health. High-quality dog food containing nutrients like proteins, carbohydrates, fiber, vitamins, and minerals like Nature’s Recipe Grain-Free Dog food for small dog breeds. It contains the right ingredients for your Parti Yorkie to maintain a healthy lifestyle. It is also free of fillers, ensuring your Yorkie does not take in unnecessary food that may lead to complications like obesity.