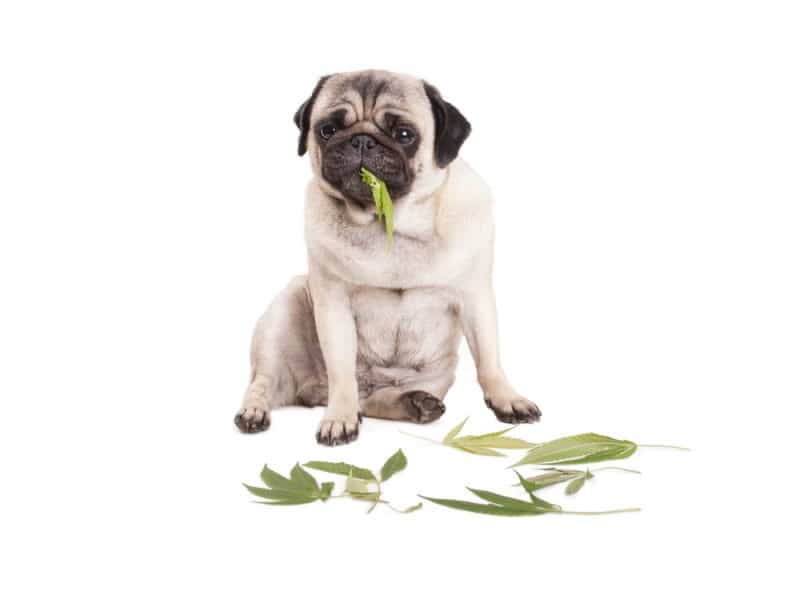 Having a little puppy at home and being concerned about his unusual activities is totally normal and looking out for things he does is an everyday task.

It’s fine to be worried if the puppy is changing his dietary routine and eating stuff other than his own food. This does not mean that he doesn’t like his regular food, but it could indicate something.

So is it normal if your puppy is chewing fallen leaves? Chewing on fallen leaves isn’t probably that harmful to puppies. However, you should prevent them from picking up any random leaf or shrub in their mouth, especially the dead ones.

Keep reading to find out the reason for this behavior of your puppy:

Why Is He Eating Leaves

The little puppy needs a lot of time to be played with and constant attention. After a while, he’ll get bored of doing the same thing. He wants his owner to be with him all the time. This is the case of most puppies as they are young and excited. It’s in the nature of puppies to be curious. So often times when they’re taken out in the yard, they will simply put a leaf in their mouth to take out that curiosity. He has to eat everything or at least chew to find out what it is and what does it taste like.

He needs complete attention and something to do all the time. Otherwise, he will get curious about things in his surroundings, which includes leaves that have fallen from trees. Their shape, colour, and scent attracts the puppy and increases the amount of curiosity in him so he has to chew them to find out what it is. Many times, the puppy is bored with his own toys and needs something else to play or chew.

This is something that happens without the owner’s knowledge. They think they are providing their puppy with all the nutrients they need but they aren’t aware that the commercialized product does not contain all the essential nutrients that are required by the little body of the puppy. Canned food lacks many nutrients that are present in the green leaves or vegetables that are necessary for the puppy to have.

Leaves are rich in fibre which is an important nutrient for the puppy. Since they are not getting any of it from the food at home, their body starts to crave for it. When the puppy goes out for a walk and chews on a leave out of curiosity which fulfils his needs, he develops a taste for it and then needs it every now and then. The readymade products for pets mention the ingredients on the label but people don’t put their time in reading them and just pick a flavour that the puppy would love and give it to him.

It is said that many animals chew or eat leaves to help them vomit and get the bacteria out of their stomach. This helps them get rid of the bacteria that might be causing them inconvenience in everyday tasks. The puppy might be having an upset stomach, abnormal bowel movements, gas, or any other problems which are being cured by chewing on a leaf. There can also be intestinal parasites acting up in the tummy of the puppy.

While all of these are happening, if the puppy tries to go outside and chew on leaves, let him as that may heal him. Also, he knows that if he has developed a taste for such a thing, it will be useful as well. If the puppy is not healing and the situation is getting worse, he should be taken to a vet and a proper consultation should be done. All of these things happen due to a change in taste, a different treat that the puppy might not like and can cause these problems.

Can Leaves Be Eaten

The right question would be which leaves can be eaten and which cannot. It’s easy to know which leaves might be dangerous, the dead leaves. Its common sense, the green leaves are rich in proteins and fibre and are good for the health of the puppy. But not all the time. Other than that, the dead leaves are not worthy for the puppy to eat as they will cause him illness.

Besides this, puppies might find leaves tasty to chew on and will consume it as part of their appetite. However, the leaves do not contain all the nutrients in them to make a full diet for the little puppy. But due to boredom, the puppies develop a habit of consuming unwanted things like leaves and this might get much worse if not controlled at the right time.

Apart from this, the damage dead leaves can cause to the puppy’s health can be detrimental and can cost a lot to save him. So looking out for him all the time and prevent him from consuming any unwanted waste.

Stop Them From Eating Leaves

It’s not that hard to stop them from eating leaves. Since puppies have higher energy levels, they tend to keep themselves busy all of the time because they can’t sit idle. In the case of extreme idleness, they will chew unwanted materials which can turn out to be unhealthy.

This can be easily prevented by giving the puppy enough toys to play and to chew on. There must be a rotation with the toys as they would get bored by playing with the same toys every now and then. There must be many toys to keep them busy.

Other than that, when the puppy isn’t playing indoor and wants to go outside, don’t let him roam around freely. Instead, have a piece of wood and play fetch with him as this will provide him with physical activity and he won’t become idle. Lots of exercises is always good for the health of little puppies.

How To Control Your Puppy

While walking on the road with the leash on, it’s hard to keep the puppy entertained. He can’t run, can’t play fetch or do any other activity. So the puppy will try to eat leaves off the ground which could potentially harm them. The owners must keep an eye on the puppy if they get something unusual in their mouths. It’s not that hard to train a puppy to stop doing it.

Stroking their leash and giving them a ‘No’ would work easily on the little puppy. It does not have to be harsh, but can be in a sweet and loving tone as it is for their own benefit. It is often said that undomesticated dogs have a taste for leaves and have become an omnivore due to the situations they face.

These include the shortness of prey, and fill in the gap of hungriness as there are no preys available. Omnivores are those animals that consume both flesh as well as plants. There are limited creatures of this type and thus wild dogs adapt to the surrounding to fill their needs.

Your pet requires extra care, extra attention, and extra love while growing up. Ignoring them, not giving them enough time, or not playing with them will hurt their feelings and they will have to find other things to keep themselves busy. They have to look for places, things to eat, toys to play to get a little attention by being adorable in front of their humans.

They find many ways to keep themselves busy, but can’t differentiate between what will harm them and what won’t. So whenever you see a puppy with a leaf in mouth, take it away, look for any symptoms of a problem, then visit the vet. Letting your pets do whatever they want is another level of irresponsibility.

Just like keeping an eye on children, small puppies also have the same right on their owners to be attended and cared for. They should be given proper care and enough toys for their playtime and for other times, there must be chewing toys so they don’t get bored. Chewing toys are necessary as the teeth of the young ones are growing and they need something to help with teething.