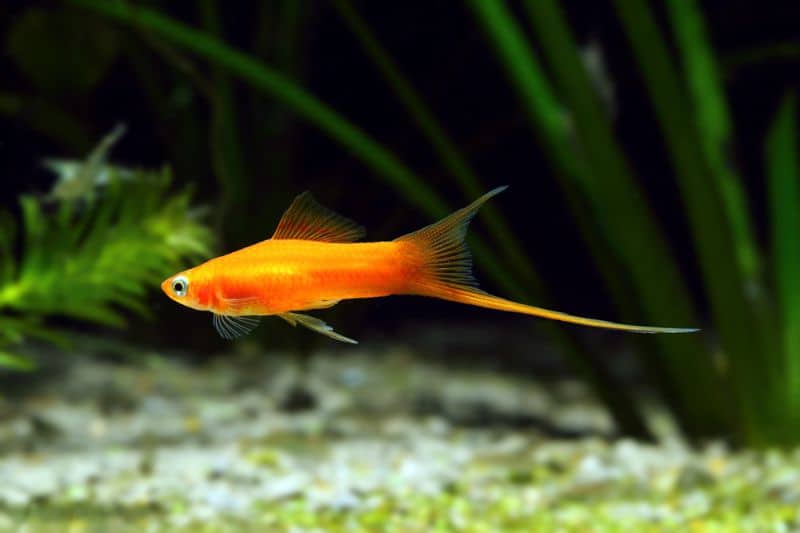 For any aquarist, just the thought of breeding and starting a fish nursery can be an overwhelming challenge. From the general tank guidelines to introducing the two genders to each other– there are numerous avenues which need to be discovered.

So, what are the best fish tank conditions for successful swordtail breeding? Aquarium fish like Swordtail are easy to care for and readily breed when kept in a tank with mixed genders. However, a little intervention from the aquarist’s side can ensure a healthy variety of fry to serve the purpose of your breeding.

Luckily, I have the answers to all your queries. So, let’s not delay any further and delve deeper into how you can successfully breed your swordtail fish by providing it with the most suitable habitat.

As we mentioned above, swordtail fish are an ideal type of pets for even beginner aquarists. They require minimal maintenance and begin mating as soon as they are introduced to swordtails of the opposite gender.

Additionally it should be noted that swordtail fish are livebearers. This means that instead of laying eggs, they give birth to live fry that are swimming and fairly large when born. Moreover, the livebearer young have a higher chance of growing to adulthood than fish raised from eggs as their upbringing in the mother’s womb provides for higher protection and efficient development.

Set up your tank for swordtail breeding

Swordtails are large fish, and in some cases, can grow up to 5-6 inches.

When purchasing a tank with the intention of spawning, make sure you purchase a large aquarium, one that holds approximately 20-30 gallons of water.

It is not uncommon to witness a swordtail jump out of the aquarium. Seeing your beloved fish dried up on the carpet next to its ‘home’ is a saddening sight and most aquarists don’t understand the reason behind such behavior. However, several species of swordtail have a tendency to jump during numerous occasions including the excitement of breeding.

To avoid the unexpected, keep a lid on the tank at all times. Also, ensure that the water conditions are favorable for the fish and there are no ‘bullying’ tank mates that may be stressing your swordtail as that might induce jumping.

HOW TO BREED SWORDTAIL FISH! (Video)

Swordtail fish are sturdy types of tropical fish and can tolerate a wide range of water temperatures. However, they thrive best in temperatures of 65-82 degrees Fahrenheit.

With any type of aquarium fish, it is important to maintain a stable water temperature as sudden fluctuations in the temperature can harm the fish and weaken their immune system.

I would recommend a 25% water change every week to ensure your fish are provided with a clean and healthy environment to thrive.

Generally, swordtails are omnivorous eaters and enjoy flakes and a variety of live foods such as bloodworms, brine shrimp, mosquito larvae, and fruit flies.

However, don’t neglect their need for herbivorous foods, especially if you are planning to breed the fish. Vegetables like cucumber medallions, broccoli, zucchini, and shelled peas are gobbled down enjoyably by the swordtail. They also enjoy eating algae and other vegetation present in their aquatic habitat, so make sure you add plenty of live plants in the aquarium besides the artificial décor.

Once you have succeeded in setting up proper housing conditions for the fish, it’s time to add the fish in the tank and encourage the mating process.

Swordtails can start breeding from an early age of three months. Once the fish become familiar with their surroundings, you may notice that a male swordtail fish is continuously swimming next to and nipping at his counterparts.

Often, the continuous advances from the male can put stress on the female fish. This is why it is important that you house a larger number of female than males to reduce stress and exhaustion. Although, swordtail fish are a peaceful type of species– the male fish can become aggressive for the attention of females which can cause a dispute.

In fact, having 3 to 4 females for one male is an ideal ratio for successful breeding. Never overcrowd the tank as it will not only increase stress on the fish but also reduce swimming space.

Fun fact: Swordtails are capable of mating with other species of fish such as platies as well. If you are not interested in inter-breeding, make sure you keep them in separate tanks.

How to identify and care for an impregnated fish

As the time of birth approaches, you may notice the pregnant fish becoming lethargic and less interested in food. It may also prefer to stay near the bottom of the aquarium.

The swordtail fish gives birth to 10-100 fry at one time and there is always the possibility of it giving birth again in four to six weeks, without the presence of its male partner. Interestingly, swordtails can keep sperm cells inside their pouch and fertilize over and over again with only a single insemnation.

Caring for the newborn

Unfortunately, similar to other live bearing fish– swordtails lack motherly instincts and it is natural for them to eat their own fry.

To curb this dangerous situation, I would suggest moving the mother fish in a separate tank before she gives birth and placing it back in the community tank as soon as the birthing process is complete.

You can also make an effort to provide your fry with extra hiding places in the form of thick greenery and decorative items inside the tank. If you plan on keeping the fry and the adults in the same tank, then this is your only viable option.

Luckily, just like the adult fish– the swordtail’s fry don’t need much maintenance as well. The young ones start swimming and searching for food as soon as they are out in water or a few hours after it. If they don’t seem to be moving at all after birth or are sinking to the bottom, this suggests that they are premature and haven’t consumed their complete yolk.

Typically, it takes around four to six months for the young swordtail to attain maturity and breed their own set of babies. In 2 months of time after birth, they can be safely kept with adult fish when they become large enough not to be viewed as food. After this time, they are too big to actually fit into the adult’s mouth.

Does swordtail have a long life span?

The birthing process puts a lot of strain on the female swordtail. As a result, they start appearing dull and become lethargic after two to three sessions.

Swordtail fish are also prone to internal illness, which usually lessens their longevity. Overall, the average lifespan of a swordtail is three to four years in the wild but they often meet their end within 1-2 years in an aquarium. Swordtail fish usually do not die of old age; instead, diseases and stress get the better of them.

Which fish make good tank mates for swordtails? Swordtails are active and social fish who enjoy the company of others in the tank; be it their own kind or other fish. They get along well with similar freshwater species such as platies, mollies, tetras, and angelfish.

However, the risks of inter-breeding remains so only mix the tank with different species if you want hybridization to occur.