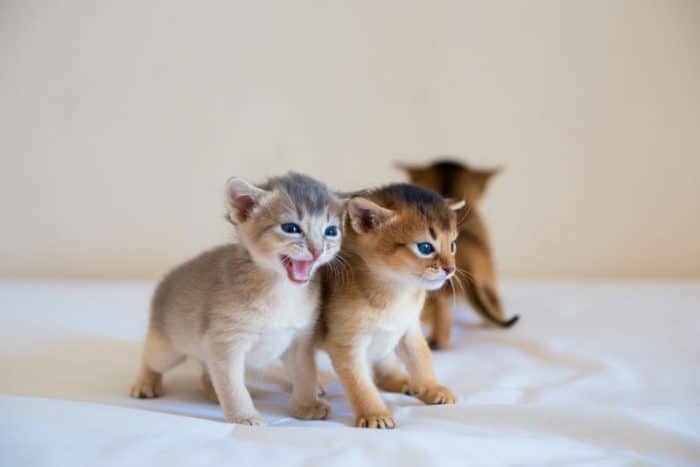 Since pure breed Abyssinian cats can be quite expensive, you should be prepared to pay the price in advance.

So how much can an Aby cat cost? On average, an Abyssinian kitten can cost anywhere from $500-$1200 from a reliable breeder. The cost can vary depending upon factors like where you live and how reputable the breeder is.

But you don’t necessarily have to buy a kitten, because another great alternative is adopting an adult. Let’s take a look at this in detail below.

Buying a cat refers to “purchasing” it from a pet store or a breeder. These people breed cats for a living and this is considered to be unethical by a lot of pet owners since they believe that no one can put a “price” on an animal. Also, these breeders mass produce pets and usually do not have regard for their basic needs.

Adopting a cat means that you’re giving a home to a cat that had been living in an animal shelter.

However, the question remains:

Is it better to buy or adopt an Abyssinian cat? The answer is: adoption. Let’s discuss the technicalities and advantages of adoption over purchase.

Finding aby cats for adoption is usually not that difficult of a task. The first place to look would obviously be an animal shelter. You can find both purebred and mix breeds of Abyssinian cats at your local adoption center quite easily.

Another convenient option is to search for aby cats on websites dedicated to helping cats find homes. These websites will directly lead you to your closest animal shelter where you can adopt an Abyssinian kitten or cat while saving a lot of money.

However, if you have money to spare and want to buy an Abyssinian cat, you should start off by looking for a reputable breeder. Since you will be spending a lot of money on purchasing this cat, it is always best to do some research to know whether the breeder is trustworthy.

They should be able to provide you with the lineage of your cat, along with approved genetic testing and health reports. This documentation will not only make sure that you don’t fall into some kind of scam, but will also prepare you in advance for the complications that might arise in the future.

Although the exact origins of the aby are unknown, it is believed that these cats come from the following places:

One of the main reasons for believing that they come from Egypt is because the cat pictured on ancient Egyptian artifacts resembles the Abyssinian cat. However, some recent DNA test has concluded that the earliest ancestors of the aby may have belonged to Asia rather than Africa.

Another widely held belief is that a British soldier brought kittens back from Abyssinia (now called Ethiopia) and bred the cat in Great Britain from where the aby became a domestic cat. However, this theory has also been discarded because of little evidence that the kittens actually were Abyssinian cats.

What Kind of Personality do Abyssinian Cats Have?

Abyssinian Cats are incredibly energetic and active creatures. They spend the majority of their time playing with toys and are particularly fond of climbing. You should have lots of toys ready for your aby when it arrives so you won’t have to worry about them getting bored anytime soon.

I bought this indoor cat tree for my abys and they absolutely love it! I think they are pretty much obsessed with climbing and this tree is a great way to let them enjoy their natural instinct without harming household items.

Moreover, abys are very intelligent creatures and will easily figure out things on their own. They will follow you around the house and learn from your actions. This also gives you the benefit to training them quite easily.

Here’s the downside of keeping abys:

They are not so much of lap cats. These cats love human interaction and are keen to develop a close bond with their owners, but do not prefer to sit around in laps all day long. Instead, they prefer to play and interact.

Abyssinian cats are also comfortable with other pets, whether it’s a dog or something like a parrot or just another cat. If you tend to travel often or stay out of your home for most of the day, it is preferable to keep another pet alongside to provide company to your aby.

Despite being such social creatures, these aby are a rather quiet species. With that being said, they are more of an indoor cat and can easily live in an apartment. Keeping your cat at home also has its advantages, as it reduces the chances of your aby catching diseases or infections from stray cats or getting injured.

Although abys are generally healthy cats, there is one exception:

These cats are susceptible to Pyruvate kinase deficiency. This is basically a deficiency of an important enzyme called pyruvate kinase that is needed for healthy metabolism.

This deficiency can affect Abyssinian cats of any age, due to which they may suffer from anemia. Most common symptoms of this deficiency are jaundice, pale gums, and lethargy. Although these might not be present in every cat, it is always good to get your cat tested, especially if you have adopted one.

Although quite uncommon, your cat might also develop other diseases that can affect their kidneys, eyes or their mouth.

The Abyssinian cat has a short, fine coat that is relatively easy to care for. To ensure that your cat stays well-groomed, brush its coat at least once a week to remove the dead hair and maintain a perfect shine. These cats also do not shed as much as other cats, but you still have to clean some fur occasionally.

If you’re wondering which brush I use for my cats, then it’s this one from Pet Neat. It’s quite simple and reduces shedding to a great extent; pretty much everything that you’re expecting from a good quality pet hair brush.

These cats are at particular risk of developing dental issues, so it would be in your best interest to brush their teeth with a toothbrush for pets once or twice a week. This will eliminate the chances of your aby developing gingivitis, a disease which abys are particularly susceptible to.

You should also trim their nails on alternate weeks. Keep a check on their ears, if you think they are accumulating dirt, gently clean them with a damp cotton swab to prevent any form of infection that might spread to the ears.

Other than that, make sure that the cat’s litter box is cleaned regularly to maintain overall hygiene. Also, get your aby checked by a vet occasionally to avoid any sort of parasitic infection or disease that it may catch.

Having a healthy cat will:

What colors do abys come in? The aby has four main colors which are as follows:

This companion can be another cat as well. If the dog does not give the cat any trouble, they can become best pals.