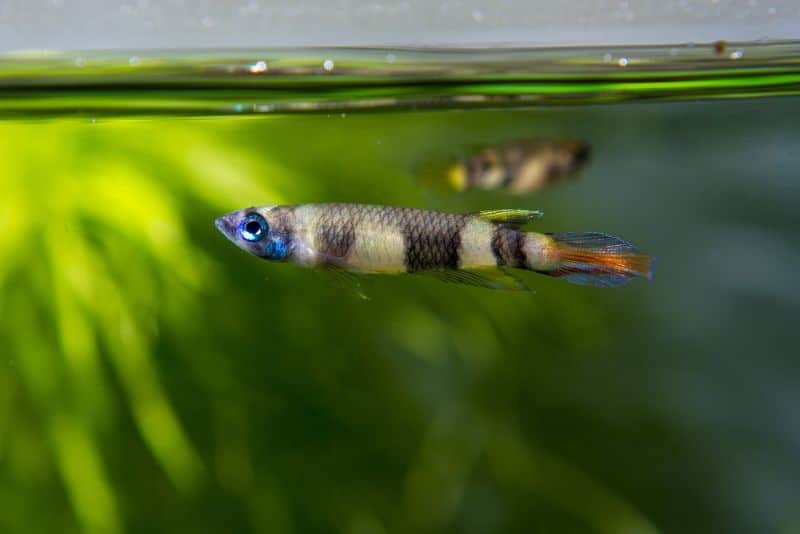 No matter how long you have been an aquarist, telling the male and female of a fish species apart can be very difficult. And when that species is a killifish, it becomes kind of impossible.

So, what are the differences between a male and female killifish? While this question can have different answers depending on the species of killi, it can be said that male killifish are usually colorful and have larger fins. Females, on the other hand, are plain gray and with shorter fins.

This might not have been the answer you were looking for but unfortunately, this is the easiest way to tell a male and female killi fish apart. Nevertheless, if you want to dig a little deeper, keep on reading.

As a hobbyist and a fish keeper myself, I understand the importance of being able to tell apart the two genders of fish I have in my tank.

Those of you who like to breed their fish would want both males and females in your tanks. And those who wish to provide their fish with a healthy and stress-free environment also want to populate their tanks with the ideal ratio of male and female fish to cater to the mood of each species, or in this case killies, respectively.

But if you are unable to tell the male and female killi, or any other species of fish apart; you can neither provide a good breeding environment nor create a liveable atmosphere in your tanks.

Besides, one of the hidden pleasures of being an aquarist is to be able to see little fry turn into fingerlings and then to full grown fish; something you cannot achieve if you cannot tell the male apart from females.

So, what should you do?

Well, first off, you need to stop worrying. And secondly, learn to differentiate between the two genders of your killifish. I know that it may sound like an overwhelming thought considering the huge number of killi species you may need to cover, but I have devised this 5-step process that any hobbyist or aquarist with some basic knowledge about any species of the killifish can use to tell a male from a female.

And here’s how it goes:

Step 1: Know When to Start

Before you can go about differentiating between the gender of your killifish, you need to make sure that they are of a certain age. While the appropriate age does vary between the different species of killi you may have inside your tank, a rule of thumb is to start at the age of a few months.

This is because most species of fish do not show any obvious signs of gender differences before they are a few months old.

If you are not sure about the age of the killies in your tank, check the pet shop receipts for the purchase date to establish an idea. If you had them hatch in your tank, then once your killies become fingerlings, they should start displaying their gender.

Once you are sure about the age of your killies, It’s time for step two:

For this step you need to observe the color of your killifish. If you look carefully, you will notice that some of your killies are brighter in color with bolder accents while others are a dull brownish gray.

The brightly colored fish are male killies. The brighter color helps them attract the female’s attention for mating while discouraging other males from showing aggression toward them. By now you may have probably established that the dull gray-colored killies are females.

If you are having trouble in telling them apart through their color or are still confused, there is another way.

A simple way to tell a male fish apart from the female is the difference in their size. This approach is common to almost all fish species, be it killies, platies or any other; but there are a few exceptions to this that I will not be discussing here.

Female fish are usually longer than males. They also have rather round bellies when compared to males with flatter and somewhat toned abdomen region.

Although it is an easier way to tell the two genders apart, this approach is best utilized when you are dealing with a school of fish instead of a pair or a few killies.

And if even that does not solve it for you, there is one more way:

If all else fails:

There is still one last way left to help you determine the gender of your killies.

While I do have my doubts about whether your gender-hunting quest will come down to this last and final step, if you, for some reason, still can’t determine the sex of your fish, you will have to relax and sit in front of your tank to observe the mating behaviour of your killies.

Keep an eye out for the ones laying eggs, those are females.

I am sure if you follow my simple 5-step process, you can easily discover the gender of your killifish.

If you are having difficulty in memorizing all of the above steps, you can bookmark this post for future referencing. Again, I don’t know if you remember me mentioning this earlier in the post but this guide is common to most species of fish, especially the ones people usually keep in their tanks.

So, whether it’s killies, platies or guppies that you are trying to find the gender of, this guide can actually be very handy.

Other species of killifish that also hail from Western Africa and are best suited for beginner tank owners include Aphyosemion australe and A. congicum. They are brightly colored, easy to breed and mix with most community tank species easily.

What should I feed my killies? Like most fish that you purchased from pet stores, killies also enjoy a good crushed-flake meal. But considering their nourishment requirements, it is better if you mix up their meals by throwing in some live food every now and then. While they do accept a number of live foods, it would be ideal to feed your killies brine shrimp, mosquito larvae, and tubifex worms.

Although, if you find it expensive to feed your killies live foods, you can stick to only feeding them flakes. You may also find some cheaper live food alternatives if you ask around in nearby pet stores or from nearby fish experts.

How do I breed my killies? The breeding and spawning process of killies varies between their different species. Some killies prefer spawning on floating or submerged plants, while others require gravel beds inside the tank. So, before you go about setting up a breeding tank, it is better to research a little about the breeding habits of the killifish species that you have. You can also ask a fish expert at a pet shop about the subject.

Bear in mind that annual killifish (a type of killies) eggs require dry incubation as well. Also, killifish will devour any fry they come across. So, if you are planning to harvest the eggs in the breeding tank, you should remove the adults from it once the mating and spawning process ends.