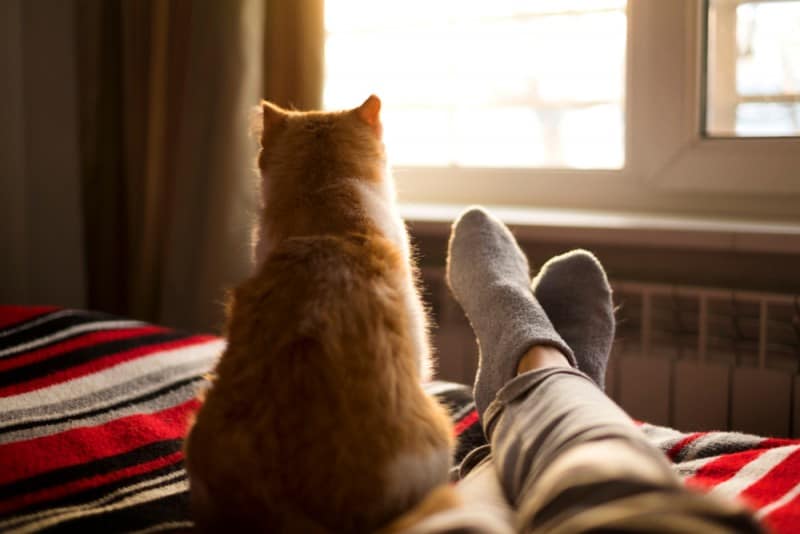 Have you asked yourself before:

If you’ve ever been in this situation, you know what we’re talking about.

And today, we’re going to end the mystery. Here’s the reason:

When the skin on a cat’s back twitches, it’s usually due to an automatic reflex. This reflex is triggered when your cat feels certain emotions, or is touched in certain places. However, in certain cases, it could also signal a medical issue like hyperesthesia syndrome.

Why your cat’s back is twitching?

You might have noticed several times that the skin on your cat’s back suddenly starts twitching.

To most cat owners, this can be quite alarming, even scary at times. However, this should not worry you unless you’re noticing other symptoms along with the twitching.

The fact is that the back of your cat has a muscle called the cutaneus trunci muscle. This muscle basically controls the movement of the skin on their back, and is a natural part of their body.

But why does this muscle twitch sometimes?

There are several reasons for this:

However, what if none of these are reasons why your cat’s back is twitching? Is that a sign of something more serious?

What is hyperesthesia syndrome?

Although researchers have not found the reasons for this disorder yet or why it occurs, they have narrowed down the symptoms. There are very few cases of this syndrome, but they can be found in cats of all ages and all breeds. In this syndrome a cat faces many different symptoms:

One symptom is that your cat’s skin will start to ripple from its shoulder to its tail. There may be twitching in the skin, or waves from the top to the tail may also be seen.

Cats going through this disorder may develop periodically dilated eyes. Their eyes will get stuck in one place and they will stay focused for the duration of the seizure and their pupils may start to dilate.

Your cat may go through phases of hallucination. It may start to see objects and things that are not physically present around it and would also be found focusing in mid-air or following something.

When cats are having an episode of the hyperesthesia syndrome, they may tend to lose bladder control and would be found urinating more than normal or in unusual places.

It’s been noticed that cats during an episode may start to vocalize in a rather painful manner. They will meow more than usual and their voice would have the element of pain in it so visible that you will be able to easily detect that your cat is in pain.

Cats usually become sensitive to touch due to hyperesthesia. You may notice that they react more than ever if you even just slightly touch its spine or tail.

Cats usually start to bite themselves in one place and may even start licking themselves too much due to this disorder. They may even bite off their fur because their skin is significantly irritated.

Apart from the above-listed symptoms a cat may also get sacred out of the blue, behave abnormally, scratch the furniture, and even salivate more than usual.

You may notice that your cat is laying around or even sleeping when it suddenly starts to run around or scratch itself and then goes back to sleep. A cat with this disorder may face one or more of the above-listed symptoms.

If your cat seems to be having this disorder, you may notice that they will be sensitive when you touch its spine or its tail. This normally happens because the muscles under the cat’s skin face a spasm or something which results in the skin twitching or rippling.

How to diagnose feline hyperesthesia syndrome?

Even though you are now aware of the disorder, you would want to know how to diagnose this disease. This will be examined in your cat by the process of elimination. This means that you will have to eliminate other factors that would be causing your cat to behave oddly or twitching. If your cat has allergies or flea dermatitis, the symptoms may be remarkably like the ones stated above. You will have to eliminate most of these reasons.

Your vet will have to perform a physical exam of your cat and learn about its history so that they can be diagnosed properly.

Causes of this disease are still unknown to scientists, but they think that it’s caused by a neurological disorder as cats have spinal cord sensitivity in this syndrome. It may also develop with a previously underlying disorder or a seizure disorder as well.

According to the scientist’s thoughts, multiple factors come into play and cause cats to suffer from this syndrome. It’s also been noted that cats with hyperactivity or nervous problems tend to get affected by it the most.

Since the causes of hyperesthesia have not yet been identified by doctors, the treatment is still unknown. However, there are certain things vets ask owners to help control the disorder as listed below.

There are no specific medicines to completely cure this disease, but vets have been able to give medication to dial down the effects and the pain. If your cat has been diagnosed with the said disease, your vet will recommend some anti-anxiety medicines.

Apart from the medication, vets have been able to relive the cats with frequent episodes as well as help them stay calm so that the episode passes off quickly. Vets suggest that the owners of cats with hyperesthesia syndrome, should involve their cats into more activities.

The owner would also be suggested to make sure that all the dietary needs of the cat are being fulfilled. All the vitamins and minerals are being given to the cat so that its health can be maintained.

The vets may also prescribe your cats with mood-stabilizing drugs in the worst-case scenarios to ease the episodes of the seizure and get them back to normal.

The cat’s environment will have to be strictly catered to its needs so that there is no negative influence which can cause the cat to get stressed and face severe episodes of hyperesthesia syndrome. But it may be difficult to make sure that the environment has just enough positive influences for the cat to stay happy and relaxed.

Is hyperesthesia in cats deadly?

No. there hasn’t been any cases of cats dying of the syndrome because once the disorder has been established, it does not progress and can be controlled, unless the cat scratches itself too much and gets an infection.

In this disorder, a cat starts to feel too many skin and muscle movements, unlike anesthesia where you are too numb to feel any pain. Even though it is mild, it may still be a little painful.

How long does hyperesthesia episode last?

An episode can last from a few seconds to several minutes. During the episode, it’s important that you stay composed and avoid any reactions that might hurt your pet.