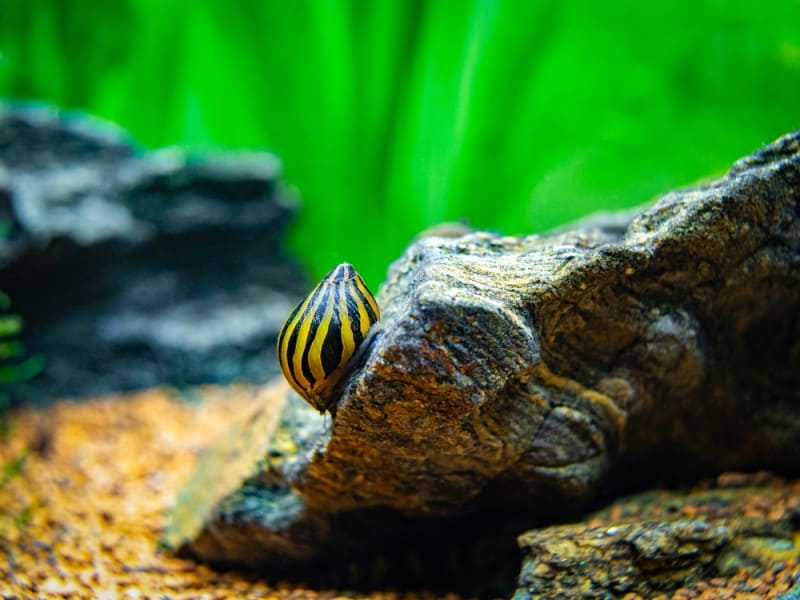 Keeping fish is fun. Cleaning the fish tank is not!

Thankfully, there are certain fish and snails that can help us out. But the question is,

What snail/fish should you get to clean your tank?

Here’s what my research says; the right snail/ fish for you is one that can easily adapt to the environment of your aquarium.

But, here’s the real deal:

Selecting the right algae eater is not as easy as it may seem. Each snail and fish species has its pros and cons that need to be evaluated before making the final call.

If you have a freshwater aquarium, you are in luck. I say that because there is a large variety of both snails and fish species suitable for you. Some of the best ones have been mentioned below.

Apple snail, aka the Mystery snail, is one of the most popular choices of algae eater for freshwater aquariums. These snails are known for their exceptional cleaning ability, ease of care, high adaptability, and friendly nature. Considered as the largest(in terms of size) snail species to exist, Apple snail can grow up to 6 inches in length and at least 1 inch in diameter. As for their color, it can vary from bright yellow to stark black. With the right care, Apple snails can live up to 2 to 5 years.

So, how do you take care of Apple snails?

Apple snails mostly feed on dead, rotting plants, algae, detritus as well as some live plants. Due to their size and relatively large appetites, these snails must be kept in medium to large aquariums with adequate plantation and space for grazing. Apart from that, each Apple snail also requires at least 2.5 gallons of water with a pH level of 6.5 to 8(best being 7) and temperature ranging from 70 to 75 degrees Fahrenheit.

Here’s a close up of an Apple snail clearing the tank.

Check out the video.

Note: Apple snails are highly sensitive and will starve to death if underfed.

When you step into the store, you will find that there is a variety of Apple snails available. Out of all of them, the spike topped Apple snail (Pomacea diffusa) is considered to be the best for cleaning aquariums, as it prefers to eat algae over living plants.

Another popular and easy to maintain snail specie is the Nerite snail. These snails are considered to be the best algae cleaners out there since their eating speed is unmatched to any other snail species.

Just like Apple snails, these snails are also known to be friendly creatures that live peacefully among their tank mates. However, they should NOT be kept with goldfish, crayfish, cichlids, or loaches since these fish are omnivores and will not hesitate to eat up the new cleaner.

Nerite snails are also relatively smaller in size. They only grow up to 1 inch and live for about 1 to 2 years only. Despite their small size, they are great at clearing up all types of algae from the tank, eating leftover fish food, and clearing the substrate. However, just like all other pets, Nerite snails also require some care.

Each Nerite snail needs 2.5 gallons of water with a pH level ranging from 7-8 and temperature between 75 to 81 degrees Fahrenheit. Since these snails like to stay hidden at the bottom of the tank, you need to add natural rock or driftwood to the aquarium to provide them a cozy place to stay.

Another great thing about Nerite snails is that they do not reproduce in freshwater, which means no fear of overpopulation. Oh, and did I mention they are some of the most stunning creatures? Nerite snails have lovely stripes on their bodies, which makes them stand out. The Black Race, Tiger, and Zebra are considered to be the most popular varieties of Nerite snails.

The Bristlenose Pleco has a tough covering over its body and bristles sticking out of its head, hence the name, “Bristlenose.” It is mostly found in brown, black, and grey colors, which sometimes appear in different patterns. Due to its coloring, this fish is excellent at blending in with the environment, making it the perfect “invisible cleaner” for your fish tank.

Since this fish is larger than most snails, it is relatively better at cleaning algae from the aquarium as compared to smaller snails like the Nerite snail. However, this also means that they require a larger area to live comfortably. The Bristlenose Pleco is best suited for a 25 to 30-gallon tank. Other than that, it also requires water within the pH range of 5.5 to 7.5 and a temperature between 60 to 80 degrees Fahrenheit.

Although algae make up for most of the Bristlenose Pleco’s diet, it is essential to note that it cannot survive on algae alone. Its diet needs to be supplemented with a plant-based feed.

Our second contender in the fish category is the Corydoras Catfish.

If you’re looking for an algae eater with incredible social skills and a great personality, the Corydoras Catfish is what you need! This Catfish is considered to be the best choice for beginners since it lives just as happily in small and medium-sized aquariums as it does in larger ones. This fish is slightly shy and timid and prefers to stay in the company of its own kind. Hence, it is advised that you keep at least 2 Corys in your tank.

As for its eating habits, the Corydoras Catfish mostly feeds on leftover food present in the aquarium’s substrate. However, that alone is not enough, and supplementary feed needs to be given. Since the Corys spend most of their time looking for food at the bottom of the tank, it is a good idea to have at least 2 inches of soft substrate or gravel and some live plants in the aquarium.

Aside from its calm nature and ability to effectively clean algae, this fish is also famous for its beauty. The Corydoras Catfish is found in green, bronze, albino, and black colors, which glisten beautifully under the aquarium lighting.

And that concludes our list of best algae eaters for freshwater aquariums.

Unfortunately, the options in this category are very limited. None the less, we have mentioned our best picks below.

The Tochus snail, commonly known as Turban snails or Top shell snail, is considered to be the best remedy for the eradication of unnecessary algae from a saltwater aquarium. This delicate creature hidden under its beautiful cone shell is a favorite of hobbyist due to its ability to eat all sorts of nuisance algae including green film algae usually found on aquarium rocks, glass and gravel, hair algae, filamentous algae, and even cyanobacteria and diatoms. Sounds great, right? No wonder they are so popular.

These snails also occasionally feast on leftover fish food, making them a true all-around cleaner. Aside from that, they are also known to be calm and easy to maintain. They have the ability to turn themselves over if they are flipped by other fish or in the gravel. And their hard shell serves as a protection from bigger fish. In short, if you’ve got a Trochus snail, you need not worry about their safety.

Curious to know how a snail turns its body over all on its own?

Check out this video.

The Trochus snail usually grows up to 1 inch and can be kept in aquariums of all sizes. It is recommended that you add 1 per gallon of water. These snails are best suited in water with pH level ranging from 8.1 to 8.4 and temperature between 72-78 degrees Fahrenheit.

The Tailspot Blenny is another commonly chosen algae eater for saltwater aquariums. It is popular for its ability to feed on green film algae, hair algae as well as red algae. The best thing about these fish is their cool, laid back nature. They don’t require much special care and can easily survive in smaller aquariums (min 10 gallons). They are usually 2.5 inches in size and have an average lifespan of 2 to 5 years. Ideally, they should be kept in water with a pH level between  8.1 to 8.4 and temperature ranging from 72 to 78 degrees Fahrenheit.

Fun fact: The Tailspot Blennies have large bulging eyes and a rather funny appearance, making them a favorite amongst the younger lot.

now that you have gone through all your options of algae cleaning snails and fishes, here are some pointers that you need to keep in mind before making your final choice

Selecting the best snail/fish for your aquarium

1. Select the snail/fish according to the size and type of your aquarium.

2. Make sure the snail/fish you pick is compatible with the fish you already have.

3. Do not opt for a larger snail/fish, thinking it will be a more effective cleaner.

4. Do not rely solely on snails/fish to do the cleaning for you. Although they can help, experts suggest regular cleaning of the tank to keep nuisance algae at bay.

5. If you opt for snails, you must ensure the water in your tank is free of any hard metals. Snails are highly sensitive to copper and may immediately die if placed in water that has copper.