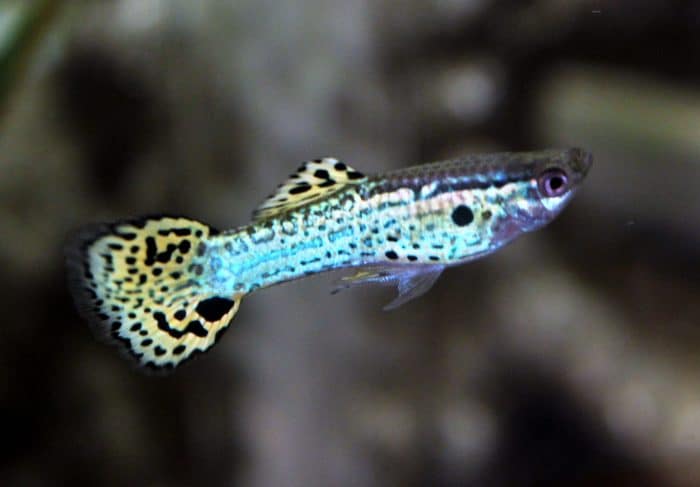 Looking for a pet that is not almost as big as you, is colorful and eye-catching? Then go get a guppy fish!

It is healthy to buy a pet of your own. But what if one hates furry or feathery animals such as cats, dogs, or a noisy bird? Nothing else but a pet fish! And if you want a gorgeous one, a guppy fish would do.

Guppies have colorful bodies and tails displayed for a show of different waves, shapes or cuts that makes them loved and adored. Male guppies are usually smaller and speedy in the water, while females always fashion their lovely tails.

Contrary to its common name “millionfish”, these pets are actually worth ten times cheaper than a million! For as cheap as $25, you can buy a handful, inclusive of food and a bowl to live in.

These creatures don’t necessarily occupy large spaces as one guppy easily fits into an environment having as small as a gallon of water; install them on your desktop or shelf.

They are easily maintained by keeping their place clean; feed them any food or insects, like mosquitoes, as they are also good pest controllers. Guppies don’t live too long, but you won’t have to go to pet shops most of the time because they can easily breed and populate. Female guppies can give birth to 30-40 fry almost monthly.

Though we can enjoy guppies in fish tanks at home because of their attractiveness, they are likely to survive in a certain variety of aquatic parameters and conditions in which they can thrive.

What Kind of Water Do Guppies need?

Guppies are one of the toughest tropical freshwater and even saltwater fish.

They are very resilient to changes in the water’s chemistry, once the pH level in the fish tanks or habitat shoots extremely high or drops down too low, you as a fish keeper must be alarmed.

These water conditions can easily be corrected or normalized by diluting 1 teaspoon per 10 gallons of water, to increase the pH level, or using a carbon dioxide injector to lower it down. Frequently monitor the changes in the water’s pH levels to keep your guppies safe.

Proper lighting is helpful for growing guppy fry a bit faster, but they must not exceed 17 hours of exposure, as it will deprive them of their needed resting time. Well, like any other creature that might fail to rest well, the fry or even adult guppies may eventually die with overexposure to light.

one inch of guppy fish can live in a gallon of water.

When keeping guppies, if you don’t feel the need of breeding, you should keep a population of exclusive females only.

But if you choose to have both, follow a ratio of 1:2 male to female because male guppies tend to “harass” or annoy female guppies by chasing them too much. Similarly, keeping them in threes is always the most effective ratio to balance their habitation.

Guppies are parameter adaptive fish that typically live for two years as their total and usual lifespan. Female guppies who mature to produce offspring from their 10th-20th week of age, can continually reproduce until 20-34 months of age.

Guppy males mature in just barely 7 weeks or even lesser. Males, though smaller than females, have colorful and somewhat ornamental caudal and dorsal fins that they use to become attractive in the sight of females. They are highly adaptable and have the ability to thrive and cope up in any conditions both environmental or ecological, can live both in freshwater and saltwater.

They are most dominantly found northeast of South America but are now found living in almost all parts of the world. Wild guppies feed generally on a variety of food sources like algae, and aquatic insect larvae, thus making them model organisms in some fields of study like ecology, evolution and animal behavior.

What kind of water do guppies need? They can survive in both fresh and saltwater, so if the subject for domestication, they need a balanced pH, hardened and highly oxygenated water to survive.

Do guppies make good pets? Yes, especially if your place is constricted since they are small fish!