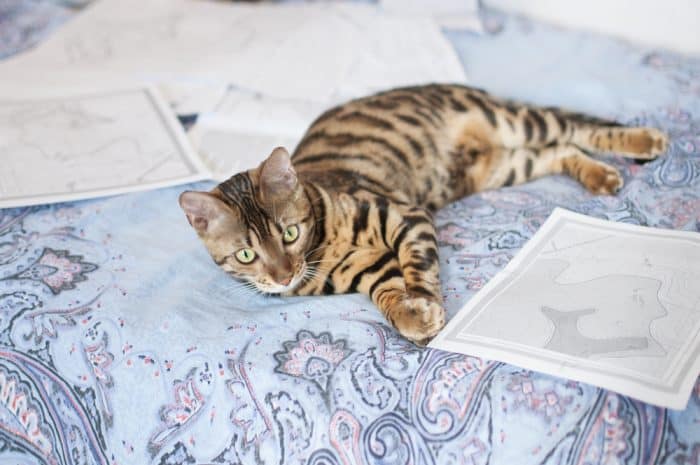 If you hold the misconception that Bengal cats originate from Bengal just like their name suggests, then you’re definitely in for a treat!

So, where do Bengal cats originate from? The first Bengal cat was produced in the United States. Their name “Bengal” is said to have been derived from the scientific name of the Asian Leopard cats. Bengal cats were originally bred for obtaining a domestic cat with the beauty and immunity of a wild cat!

Let’s explore the origin of Bengal cats in detail below!

How was the first Bengal cat bred? 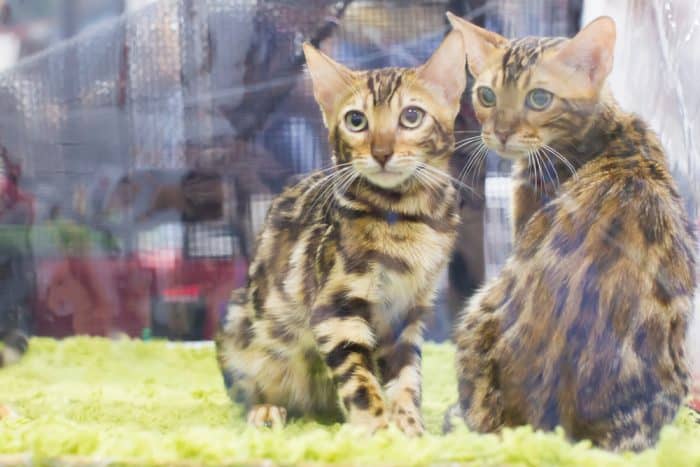 In the 1960s, the first deliberate cross was conducted between the wild Asian Leopard Cat and a domestic cat by Jean Mill. This contributed to many Leopard Cat hybrids.

Later, these hybrids were further bred with domestic cats to produce more generations of Bengals.

Bengal cat breeding was the talk around town during those days as nobody had ever imagined a cross between a wild cat and a domestic cat to be a success.

Till date, Bengal cat breeding is considered to be a great business since these cats are incredibly high in demand all over the US. In case you’re interested in breeding Bengal cats, I highlight all the steps and requirements in this article.

Who else contributed to Bengal Breeding?

William B. Engler, a zookeeper, is known to have played a crucial role in pioneering Bengals

That led to the breeding of at least three generations of Bengals.

The purpose of breeding Bengals?

According to Engler, his purpose of creating such a hybrid was,

“To create a small exotic cat that was beautiful and that had the disposition that was suitable for a pet house cat, that had a greater resistance to disease of civilization than his jungle-bred cousins, and that would readily reproduce himself.”

The ‘wild look’ in cat got a lot of attention from people. Hence the Bengal was bred to obtain a cat with wild-like markings but with the disposition of a domestic cat.

The most significant success of this cross-breed was that the Bengal cat personality was quite toned down and “domestic” despite its appearance being wild.

I give a detailed note on the Bengal cat’s personality in this article.

Who coined the name ‘Bengal’ for the breed?

William B. Engler is known to officially name the Bengal breed as ‘Bengal’ in 1974.

There are views that it may have been derived from his name – B. Engler

When was Bengal cat officially recognized? 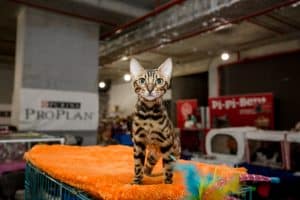 It was in 1983 when the Bengal cat was officially recognized by The International Cat Association (TICA)-one of the world’s largest registries of pedigreed cats.

Jean Mill worked really hard to get Bengal cat registered by TICA and recognized as a domestic breed.

But getting this recognition was far from easy as there were many hurdles in the way.

It was considered dangerous to show cats that descended from non-domestic wild animals.

Why were Bengal cat first bred?

Back in the days, wild cats were bred with domestic cats to produce hybrids.

The first Bengal breeding program was done in the United States in the early ’70s.

That is known to have continued till the 1980s.

Where do Bengals get their glittering coat from? 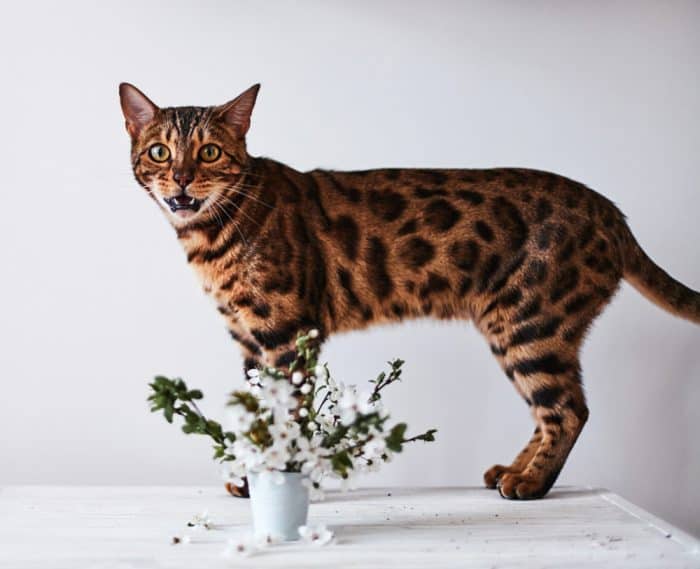 Bengals are famous for their short, soft, and exotic looking coats!

It was in the 1980s, Tory a domestic street cat was imported from India and was bred with the Bengal breed

It yielded a glittering coat that this cat is well known for today.

A lot of people expect the Bengal cat size to be huge. But that isn’t so.

These are relatively smaller cats with an interesting history which makes them special.

Bengals have been bred with different types of domestic cats that make their personality even more interesting.

They are not only intelligent, but they also have an exceptional memory. Also, even though they share a wild bloodline, they can get along with other pets and with people too!

They are vocal cats as they love to chat. Along with their exceptional love for water! They are a breed which is highly active and full of energy, and they love to explore their surroundings.

What is the best thing about owning a Bengal Cat?

Have you ever imagined owning a small leopard?

Well, owning a Bengal cat is similar to that! Their exotic appearance and fun personality make them an ideal pet to own.

They are not average lap cats but a playful breed that gets along with dogs and even children.

They are all-rounders as they are social, love water, don’t mind wearing a leash and also enjoy car rides!

What wild cat is the Bengal derived from? A Bengal cat is known to be derived from the wild Asian Leopard cat- Prionailurus bengalensis.

The wild Asian Leopard Cats are bred with a number of domestic cat breeds to obtain the Bengal cat.

The Bengal cat is famously recognized as a domesticated cat breed, and its name comes from the taxonomic name of Asian Leopard, bengalensis.

They are known to have an amalgamation of traits of domestic cats and Asian Leopard cats, that makes them a unique breed.

Are Bengal cats rare? Bengal cats are not rare; their availability is relatively difficult as a result of their cost factor.

That makes them special and hence one of the reasons that they are known as an expensive cat breed.

How were Bengal cats made? Initially, it all started with testing of Asian leopard cats for their immunity to feral Leukemia that later led to the pairing of cross-breeding them with domestic cats.

It was during the 1970s when Jean Mill, a geneticist carried out an experiment by pairing Asian Leopard cat with a domestic cat and this is when the first Bengal cat was produced.

Bengal breeding was further carried on by William B. Engler- a zoo keeper, who was interested in creating an exotic cat with wild markings.

What is a Bengal cat mix of? A Bengal cat was made by pairing an Asian Leopard cat with domestic cat

This breed is the mixture of both the cats!

It has the look of a wild cat as its coat has striking rosettes or spots made up of more than one color, usually a secondary color forming a dark outlining to the spot. Bengal coats also come in a marbled pattern: one or more colors swirled into the background color.

Also, it has an exciting personality that is a great combo of wild genes and domestic nature as they are exceptional hunters, love water, enjoy car rides, love walking on a leash and get along with children as well as dogs!