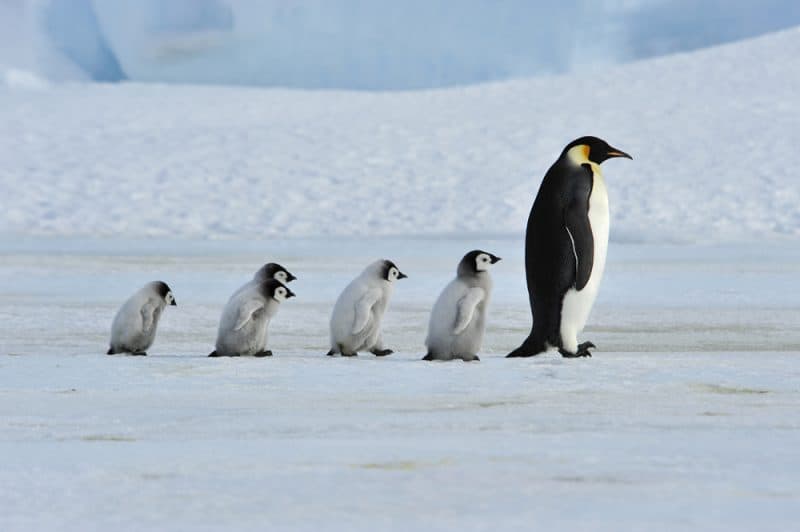 Where do penguins live? Penguins live in the southern hemisphere. You will find majority penguins shuffling in the southern half of the equator. It means you can see penguins in Peru, Chile, South Africa, Galapagos Islands, Australia, New Zealand, and several sub-Antarctic islands.

Some species of penguins such as the Galapagos penguins live right on the equator, which means you can also find a few penguins in the northern hemisphere.

Where Do Penguins Live in the wild? (Video)

Did you know that there are no penguins in the north pole? Read on further to get details on this interesting fact!

Do Penguins Exist In The North Pole?

The Answer Is No!

Sorry if I have to burst your bubble, but there are no penguins living in the north pole. Even though it is hard to imagine an icy place without penguins, but it is true. The presence of penguins in the arctic is none.

Penguins almost exclusively reside in the southern hemisphere, which includes Antarctica and excludes Alaska or the Arctic!

Here is the surprising part:

It is a general belief that penguins can only survive in ice-cold regions, which is quite the contrary. Certain penguin species also live in reasonably temperate climates.

Only 6 out of the total 17 species of penguins live in Antarctica. You can find other penguin kinds in Australia, New Zealand, South America, South Africa, and on the Falkland and Galapagos Islands.

You can find a few penguin types such as the Jackass penguin or the Little Blue penguin living in the Southern West Coast of Africa and Southern Australia, respectively. It just goes on to prove that the existence of penguins is not only limited to the ice-cold regions.

Did you know penguins prefer isolated areas for a living?

Penguins usually prefer living in rocky and deserted islands where there are lower chances of land predators attacking them.

Even though penguins look like birds and are classed as birds too, but they cannot fly, which means they need to protect themselves from several predators that may hunt them down as food.

It is why penguins prefer living in isolated areas so that their inability to fly does not make them an easy supper for the hunters! 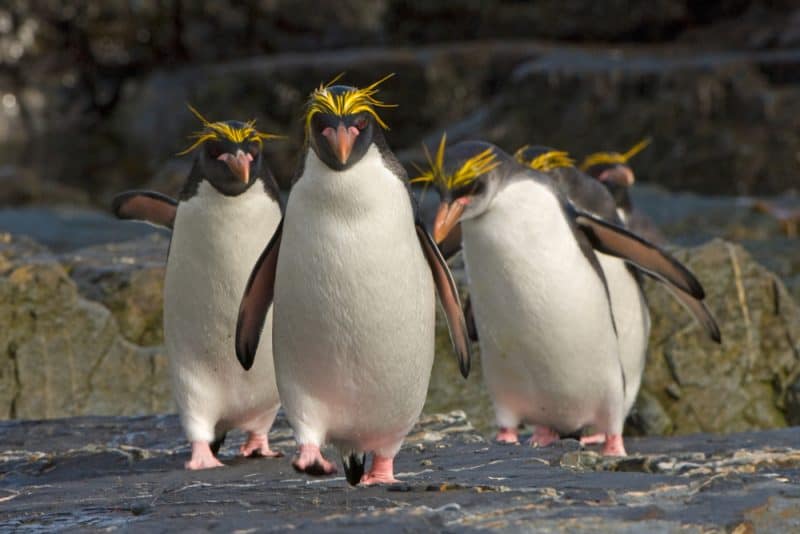 Fun Fact: You can not find any Polar Bears in Antarctica, just like you cannot find any Penguins in the Arctic. Polar bears are exclusively an Arctic animal.

Related: Do Penguins have Knees?

But how do penguins survive the harshest of Antarctica winters?

‘How do penguins survive in the icy winters of Antarctica?’ Here’s how they do it. Penguins have an amazing vascular body system, which helps in maintaining the body temperature during harsh winters.

As the temperature drops, a penguin’s body circulates blood faster to maintain body warmth. Penguins tend to lose majority heat through their flippers and feet. It means they need a prompt circulation system to avoid excessive heat loss.

Penguins need to keep themselves warm to stay active. The fact that they have super thick skins and loads of body fat under it makes them warm and cozy in the cold weather.

Emperor penguins are the only kind of penguins that survive the harsh Antarctica winters on land.

They breed in the severely cold winters of Antarctica, which is the reason why studies reveal that due to the climatic changes, emperor penguins may face a sudden decline in their population due to lack of the appropriate habitat.

Huddling does the trick!

Penguins also have this unique way of warding from the cold by huddling together among friends.

To cope with the extreme chilly, icy winters, the emperor penguins have developed a habit of clustering together, which may involve even several thousand penguins. It helps in keeping them warm and protecting them from gusty, cold winds.

Related: Do Penguins Mate For Life? 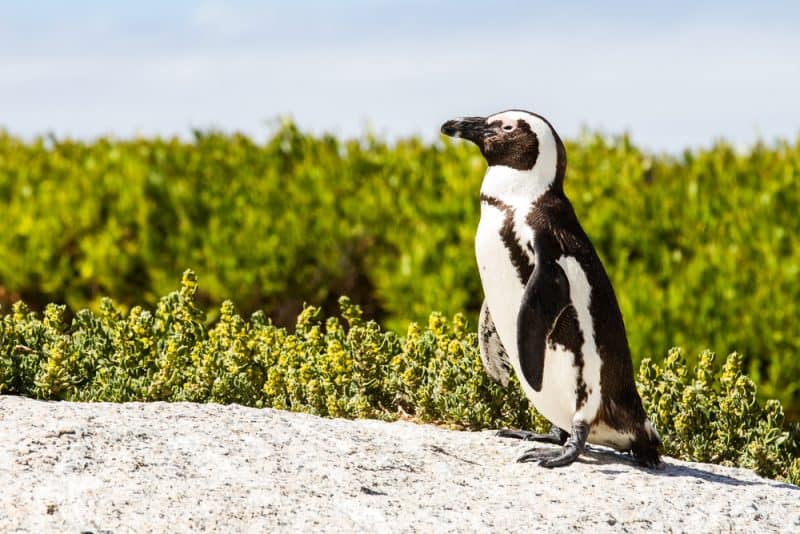 Can Penguins also survive in the warmer climates?

If yes, which penguins do, and which are these warm places where these penguins live? Read ahead for the answers!

Let us explore these:

Fun Fact: Macaroni penguins are the highest in population than any other penguin type!

Do most penguin species prefer living in cold or hot climate?

You would be surprised to know, but most penguin species live in warmer regions than they do in the colder areas! It is a widespread misconception that most penguins prefer living in the cold.

Only six out of the total 17 species live in the cold, and the others survive in warmer climates. Amazing, right?

Penguins that live in colder regions such as Antarctica are known to have thicker layers of fats under their skin. It is necessary to prevent them from getting way too cold.

Penguins living in warmer regions also do not stay underwater for too long. 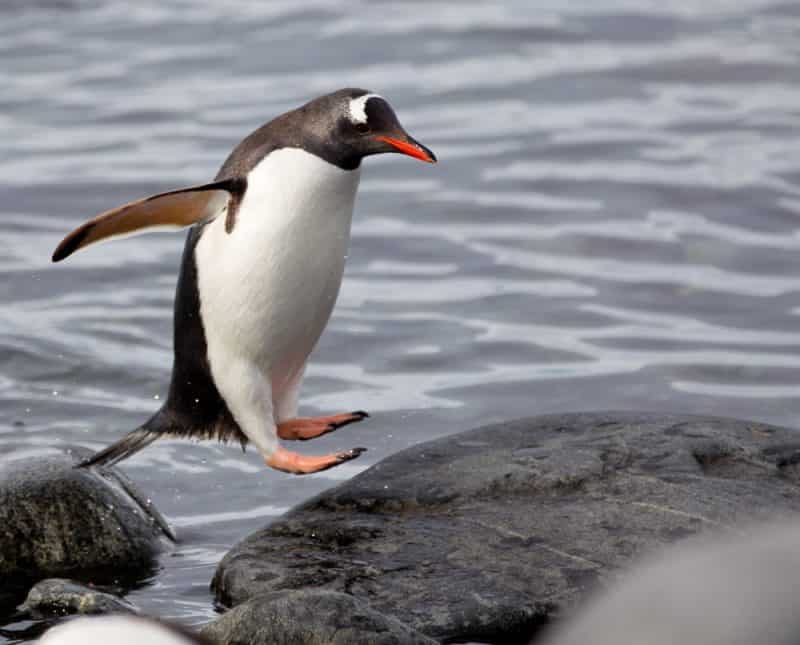 Do penguins live in Igloos?

Of course, they do not! Igloos are not something related to penguins. They were initially made by people living in the north pole where penguins do not exist.

Igloos are made out by cutting compacted snow into bricks and stacking them. You do not expect a penguin to be able to make an igloo now, do you?

Penguins live in the open and move in large groups without any shelter. Penguins are incredibly social animals, and they live in huge groups and do almost everything together. Such a penguin group is called a rookery.

They use cliff rocks and crevices for breeding when necessary.

Are there any penguins in the rainforest?

Yes, there are! And they are called the ‘Tawaki’ or the Rainforest penguin. These are the Fiordland Crested penguins that live in the southwest corner of New Zealand.

Temperate rainforests are the breeding grounds for these unique penguins. They prefer living deep into the forest in isolation and build their nests beneath logs and boulders.

Tawaki is the only penguin specie that breeds in the temperate rainforest. They mainly feed on arrow squid, which makes up 85% of their diet. The rest include krill and small fish.

Fiordland crested penguins have been labeled as endangered now, with only 2,500 pairs left according to a survey conducted in 1990.

These penguins prefer living in extremely isolated areas, and human disturbances can cause them to flee their nests, leaving chicks behind.

Fiordland penguins can live for around 20 years!

Wrapping it up, penguins are adorable creatures that we all admire. It is a wrong idea to believe all icy regions are a perfect habitat for penguins. Penguins survive in the southern hemisphere and have a distinct lifestyle.

Leave a comment below and let me know if this exciting piece of information did you any good!