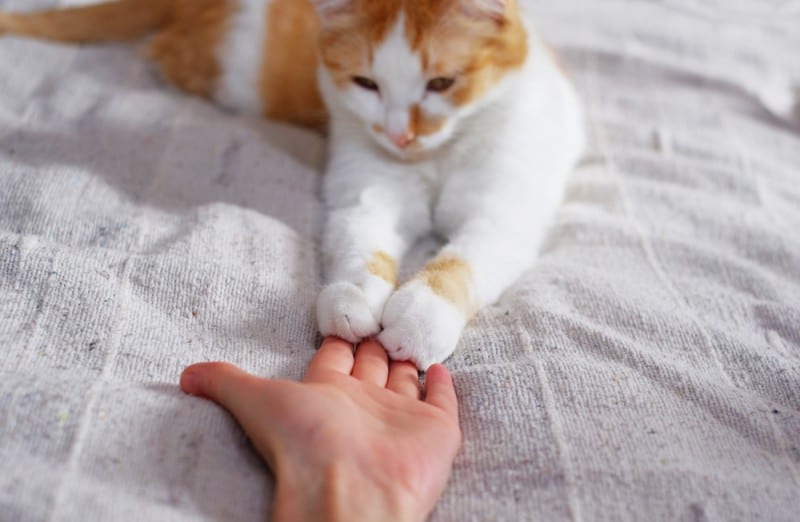 Having a pet cat and trying to love them in possible ways is something all cat owners want to do.

So why is it that your cat doesn’t like it when you hold their front paws in your hands?

It’s totally fine to see your kitty freak out when you hold their front paws. The mentality of your kitty is that their front paws are the way for self-defence and being them held up develops a feeling of being vulnerable to the predator and this puts them in a dangerous position.

However, there are more interesting things ahead related to this issue you’re facing:

Cats attack when their paws are held

Trying to touch your kitty’s paws without their permission could turn out pretty ugly. They might give you multiple signs to leave them or move away like:

These are the common reactions recorded when the kitty’s paws are being held without invitation.

The paws are the self-defence of the kitty. They use their front paws to make sure nothing harms them in any way. Of course, with the help of the retractable claws, it’s really helpful for them to protect themselves from the enemy.

Not only this but also when you are trying to clean the paws or clipping the nails, your kitty won’t trust you and try to keep on escaping. All your cat knows is that they have been captured by a larger predator and they have to run to save their life or fight back.

Paws are one of the most sensitive parts of the cat’s body. Either they could be ticklish or a toggle to anger. However, you can find it out just by practising it on your kitty and their reaction will say it all.

If your cat likes you touching its paws, it might ask you to tickle them more. You know it by the actions of the cat. On the contrary, your kitty might flip out of anger and you would be walking around with scratches and bite wounds on yourself. So that’s obviously a no.

Moreover, it’s pretty simple to tell if your cat likes it or not. If the kitty retracts when being tickled in the paws, it would be better to stop instead of pushing your luck to find out if the kitty will like it later or not. This would just ruin the mood of the kitty and could harm your bond with them.

Reactions of the cat

It’s important to realize that cats don’t usually laugh. This isn’t because they are some kind of joyless animals without feelings or something.

Cats can’t actually laugh and show their happiness to their owners. So instead, they use these methods instead to show their joy and happiness:

You should look for these signs as these are the signs of happiness and joy. And not only while petting your cat on the paws, but on other places of their body as well.

On the other hand, you must also look for the elongated and harsh meow your cat may release. This is the main sign of your cat asking you to ‘Get off!’ and if this isn’t taken seriously, the cat might hurt you.

Why is my cat letting me touch its paws?

Your cat allowing you to touch their paws is the way of telling that they trust you. Your kitty might only tolerate this when it’s extremely relaxed. However, this is how your cat says that you aren’t a threat to their safety at all and they have faith in you. Also, this level of trust isn’t easy to build.

You would have to be prepared for your kitty to change its behaviour suddenly without anything happening. However, you shouldn’t be shocked if they attack you out of nowhere even though they were happy the moment before while you petting them.

For instance, it isn’t in the nature of the cat to let themselves be vulnerable for so long, even if it’s their owner petting them.

It’s important to realize that when your kitty puts up their paws on you, this is another sign of them showing affection towards you. You must know cat paws contain sweat glands which release a scent.

This scent is used by the cats for marking their territory as a safe place for them which also means that they consider you a part of their family.

What you should know about the paws

We’ve discussed that paws are an extremely sensitive part of the cat’s body. Apart from this, they don’t like their paws to be held. And if that happens, they freak out and might violently hurt their owners. A few things you must know about your kitty’s paws:

These are the two basic things that you must know before trying to pet your cat’s paws if they would like it or not.

It’s normal to think that your cat might reject massaging the paws as they don’t like it being held. But this might not be true. Some cats find it amusing getting their paws massaged as they go through a lot of activities in a day like:

The kitty needs to be exceptionally calm and relaxed when you want to try massaging their paws. Furthermore, this could be practised right after they have had their meal as this is when they are trying to relax.

How to massage the paw

Gently reach for one paw at a time and hold it for about three seconds. If, the kitty remains calm, reward them with a treat. This would highlight your good intention towards the cat. However, if they try to get away, leave them alone as it won’t be a good idea forcing them on this.

Likewise, if your cat lets you massage the paw, rub each paw from the top to the claw. Try not squeezing it too hard as this will frighten them. Also, don’t rub the paw pads too hard as it will upset the kitty and the massage would end up in a fight.

Your kitty would not show you their paws when they come home from an outside walk. But it’s compulsory in the case of a snowy backyard or a hot summer afternoon.

In the case of winters and due to the excessive snow, the paws need to be thoroughly cleaned as the salt in ice shouldn’t be eaten by the kitty. The kitty tends to lick its paws to clean them and it could turn out to be unhealthy.

If its summer season, the excessive heat could burn the paw pads of the cat. They have to be checked and treated in this case whenever they come home.

As can be seen above, you should always try not to hold your kitty’s paws as they could be frightened because of that. The paws are one of the most sensitive parts of their body. They feel unsafe and feel endangered when their paws are being held.

The paws are partly ticklish mostly depending on the kitty’s mood. If anything is practised against the will of the cat, they would freak out and harm you. But if they like it, they would give you signs that they appreciate it.

For the most part, you must check your cat’s paws whenever they take a walk outside in extreme weather conditions. And not only this, kittens should never be allowed to go alone outside in any circumstances, especially kittens.