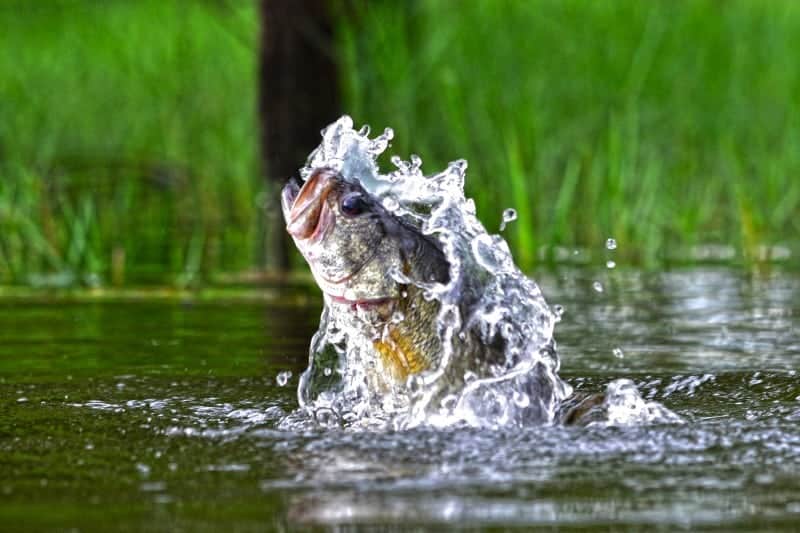 If you ever see a fish jumping out of the water, you are sure to get caught by such a majestic sight.

But, even though it is lovely to see a fish jump out of the water, the reason behind it might not be so lovely.

There are several other reasons that we will discuss in detail. And if you have a fish at home, you might have trouble keeping it in its tank. If that’s the case, you should read ahead as we will also discuss such a scenario and how to tackle it?

Why do fish jump out of water?

So, here are some of the most common reasons:

During warmer seasons, many insects are found near freshwaters and streams.

These insects that either hover over water or sit near the water are food for certain freshwater fish. So, to eat them, these fish often jump out of water when they’re hungry and cannot find anything to eat within the water.

Certain fish jump out of the water to move forward.

This usually happens when the fish is trying to move upstream. By jumping, the fish exerts more force that helps it move forward.

Fish can move faster by jumping and are even known to compete with a motorboat while jumping.

For example, the pacific salmon are known to display commendable leaps out of the water in an attempt to bypass all obstacles so that they can reach their spawning areas.

Sometimes, behind the spectacular view of a fish jumping out of water is a rather unsettling reason.

Basically, most fish are known to jump out of the water to escape from a predator. By jumping, the fish can, for a moment, vanish from its predator’s site, which helps it to escape.

Moreover, most of the predators do not travel long distances to catch their prey. So, if a fish is able to travel a safe distance, it is sure to live for another day.

For example, the flying fish are known to escape from the daunting jaws of their predators by jumping out of water. They are known to glide as far as 400 meters above water with the help of their elongated fins.

Fish also jump out of the water if they fear that a predator might be nearby.

If you want to confirm this theory:

Take a motorboat into a lake. and you will see that the fish will start to jump out of water. It happens because the fish get scared by the roaring of the boat’s engine and fear that they might be getting attacked by a predator.

To free itself from parasite

Sometimes, fish jump out of the water without any particular reason.

According to some marine biologists, they do so to rid themselves of irritating parasites on their bodies.

For example, certain species of manta ray are known to jump out of the water every now and then. Experts believe that the only logical reason for such a scenario is that because fish cannot scratch parasites of their bodies with their fins or mouth, they do so by jumping out of water in hope that air might throw off some of these bugs.

Due to lower oxygen levels

Another sad reason why certain fish jump out of water is that the condition of water they are currently in is so poor that they need to jump out of it for survival.

For example, the catfish, found in the Asian and African waters have a complex respiratory structure that helps them breathe underwater as well as out of water.

The process of evolution has made them capable of adapting to their environment that sometimes forces them to find other water sources because the current water has either dried up or is so mud clogged that it is not suitable for survival.

After it has rained substantially, these amazing creatures jump out of their muddy water and onto the wet ground. After that, they hop about on the wet ground until they find a habitable puddle or pool of water.

The catfish are known to survive several hours or even days on the ground.

Certain fish jump out of the water because of a mating ritual.

Mobula munkiana, found in the Gulf of Mexico, gather in large schools at a particular time annually and jump out of water.

Both male and female fish have been observed jumping out of the water to indicate to a prospective mate that they are nearby. Such a ritual increases the likelihood of finding a mate.

Marine biologists, reached such a conclusion after they found juvenile fish near locations where such rituals occurred.

How to Stop Fish from Jumping? (Video)

Why is my fish jumping out of its tank?

Now that we have a good idea of why fish might jump out of water in the wild, it is time to discuss why pet fish jump out of their tanks.

Let me give you a hint:

Even though fish live underwater, they do require oxygen to live. However, unlike humans and other land species, fish live off of dissolved oxygen.

There are two main reasons why your water tank does not have enough oxygen:

If your home aquarium has a lot of fish in it, the dissolved water supply is likely to run out fast. As a result, the fish inside will have to compete for oxygen, and when there is not enough water, they will jump out.

To avoid such a situation:

You should keep lesser fish in the water tank. Buy a new water tank and keep half of the fish in one tank and half of them in the other.

If you have just one or two fish in a fairly large-sized tank, overcrowding should not be a problem. In such a case, you should look out for algae that might have grown in the tank.

Algae are photosynthetic creatures that also use oxygen. So, if algae have grown in your tank, it might use all of the oxygen, leaving little to nothing for your fish.

If you have found algae in your water tank, you should take out your fish and put it in a temporary container and clean the water tank so that the algae is removed.

Dirty water tanks are known to have high amounts of Ammonia and Nitrates that are extremely harmful and, in some cases, even fatal for fish.

If your fish is jumping out of its tank it might be because the water is dirty and unhabitable for the fish.

To avoid such a situation, you should replace the water in the tank with fresh water regularly and schedule monthly cleaning of your aquarium.

What if your water tank is neither dirty nor is it overcrowded, and your fish still keeps jumping out of water?

The reason might be that the temperature of your water is not suitable for your fish. The water can either be too hot or too cold for your fish to be comfortable in.

Check your water temperature and keep the temperature of the water at an optimum level so that the fish do not jump out of it.

How to keep my aquarium clean?

Follow the following steps to keep your home aquarium clean so that your fish can live happily and comfortably:

Why do carp jump?

Carp fish, usually found in European and Asian waters, is known to jump out of water.

They do so to clean junk from their gills. When searching for food at the bottom of the water, carps gulp the debris and filter out the edible portion. Some of the junk gets stuck in their gills as a result.

So to clear their gills of all the junk, they jump out of the water.