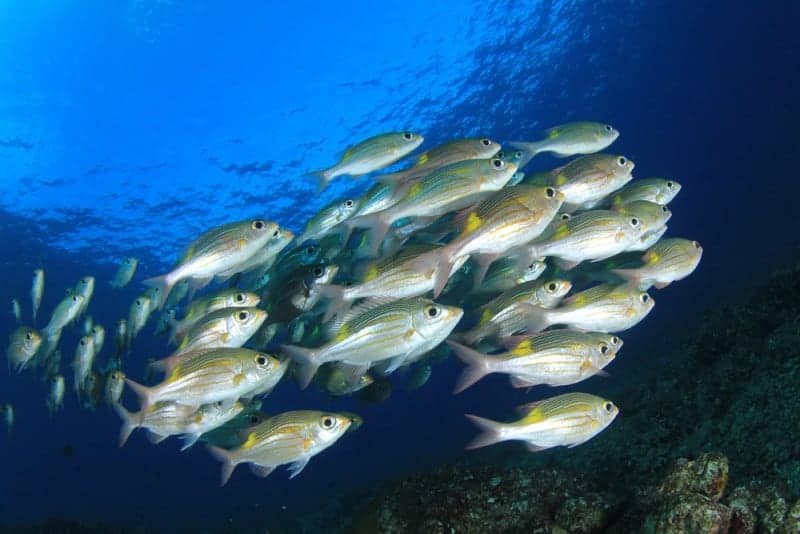 We all know fish are aquatic animals. But have you wondered why they die when taken out of water? There are various physiological differences that explain how fish survive underwater but can’t do so on land.

Why do fishes die when taken out of water? (Video)

How do fish breathe?

Let’s dig deeper to see how fish survive in water, and whether they are capable of breathing air.

How do fish gills work?

Gills are protein structures, called filaments, situated in the sides of a fish’s throat. Usually, gills are situated behind the head of the fish, with four gills in a chamber on each side. Fish take in water from their mouths and force it out of their gills. The gills have lots of blood capillaries, which allow them to absorb oxygen. Some fishes, like sharks and lampreys, have multiple gill layers. Other bony fish have just one layer of gills. They are usually covered by a protective bony structure called the Operculum.

Are there amphibious fishes?

In nature, there are plenty of animals that can survive on land as well as underwater. Amphibians like frogs need a moist environment to survive and absorb water through their skin. Reptiles such as some snakes, turtles, and crocodiles can live both on land and underwater as well. This begs the question, can some fishes do that as well?

Yes, some fishes can survive on land. These species have evolved in various ways to survive on land. They use suprabranchial organs, swim-bladders, and labyrinth organs. These organs help them breathe and absorb oxygen from the air. Some fishes can live longer on land than others. Moreover, there are other fishes that use their skin to breathe. Usually, the inner lining of their mouths absorbs oxygen from the air. It’s truly fascinating how aquatic animals have adapted to survival in harsh conditions.

Climbing perch: Climbing perch can live on land for 6-10 days. When on land, this fish maneuvers by flapping its tail. This fish has a labyrinth organ: a lung-like organ, in addition to its gills, that allows it to breathe when on land.

Mudskipper: As the name suggests, these fish use their fins to “skip” or “jump” to move around on land. Since they have no limbs, they use their pectoral fins to push themselves forward. Moreover, the lining inside their mouths, as well as skin, is capable of absorbing oxygen in the air.

Lungfish: Lungfish resort to breathing on land when there is not enough water in the environment. They do so by boring a hole inside their ground and breathing in a “den.” Lungfish have evolved with a lung-like organ called the swim bladder. It helps them breathe on land. The African and South African lungfish cannot survive in water. Because they have no gills and will suffocate if they stay in water for too long.

Snakehead: Indigenous to Asia and Africa, snakeheads are able to survive on land for up to 4 days, if their skin stays moist. They breathe on land using suprabranchial organs. These are primitive forms of labyrinth organs.

Mangrove Killifish: The mangrove killifish have gills, but have evolved to live without water as well. They can breathe through their skin and live on land for extended periods of time. Some species have been reported to survive on land for up to 2 months, while others are known to hunt on the ground and live in trees. This study shows mangrove killifish is very tolerant of salinity, and therefore thrive in areas near mangrove forests and have been reported to form cave systems near mangroves in the Bahamas. 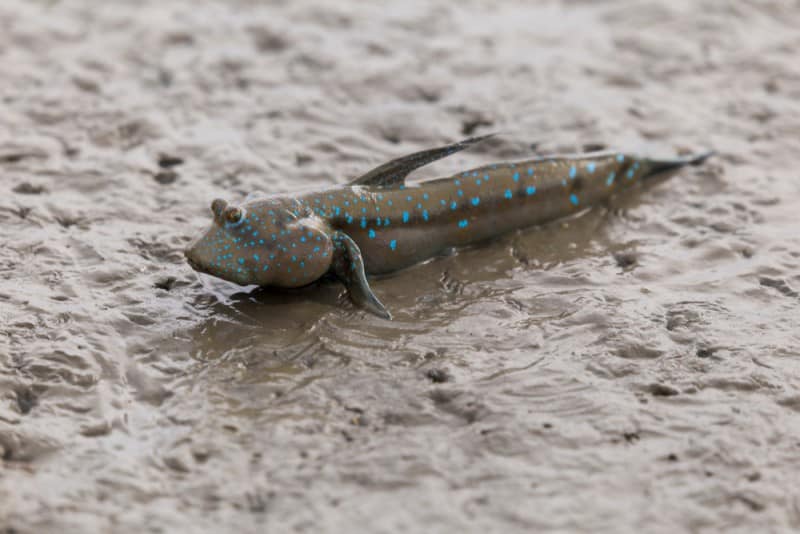 How do dolphins and whales breathe?

Dolphins and whales are, technically, mammals. While they are commonly categorized as fish because they spend their lives underwater. This begs the question, how can they breathe in water if they’re mammals?

These mammals have huge lung capacities. From time to time they breach to take a breather. Their huge lungs allow them to store enough oxygen for them to stay underwater for months. This is the reason we see these magnificent creatures breaching, or jumping out the water. Learn more about physiological ecology and breathing patterns in this research.

Since they essentially breathe air, you must be wondering why they can’t survive on land. That is because their bodies haven’t evolved to survive outside water. If these whales and dolphins wash ashore, their organs will crush due to their body weight and change in pressure. Moreover, since they are used to much colder temperatures underwater, they will overheat and die on land.

How long can pet fish survive outside water?

Pet fish are very fragile. They have evolved to live in clean water with lots of oxygen. Their gills lack the capacity to hold a lot of oxygen. Fishes like goldfish and guppies have small gills and will die off if taken out of water in a few minutes. At best, your goldfish might survive a few minutes if it kept moist, and its gills are soaked in water. It will absorb oxygen from the water for a short while until it can’t anymore.

Although it might seem obvious, people have various queries about how fish survive. Discussing these queries is important for both pet fish owners as well as enthusiasts.

How long does it take for fish to die out of water?

Water is the primary source of oxygen for fish. Without water, its almost as if fish are running a marathon holding their breath. Some fish have special organs that help them breathe on land, but most fish can’t survive out of water. Pet fish rarely last more than a few minutes when taken out of the water, while amphibious fish can survive on land for months.

Do fish drown out of water?

Fish die from lack of oxygen when taken out of water. This is fundamentally the same as humans when they drown. But using the term “drowning” is not accurate, as it refers to creatures with lungs. With fish, using terms such as asphyxiation, or suffocation, would be more accurate, rather than drowning.