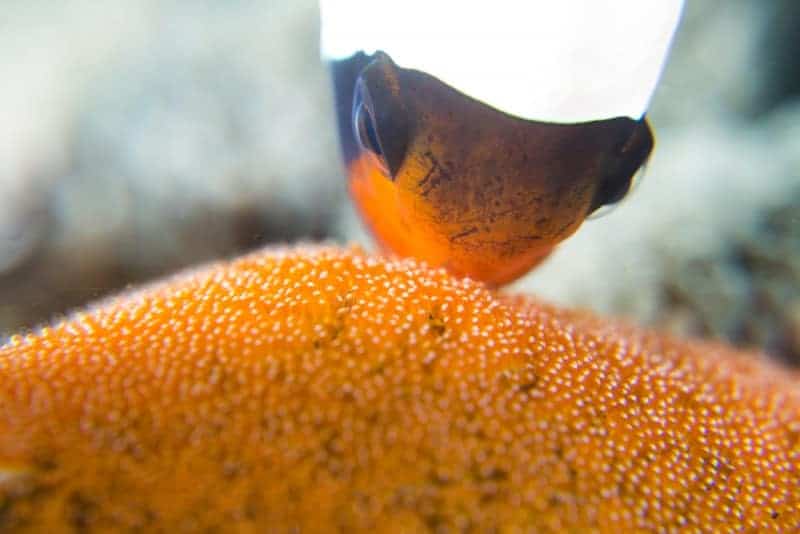 The aquatic world is full of predators. While fish protect and safeguard their eggs/offspring, it’s pretty common for them to practice cannibalism. As puzzling as this behavior is, there are reasons why some fish eat their own eggs.

Prevent Fish from Eating Their Own Eggs (Video)

So, why do some fish eat their own eggs? Well, that may be due to quite a few reasons that may not be apparent:

The circumstances and details surrounding this paradoxical behavior can vary. I have discussed all these reasons in detail below for you.

Male freshwater fish build nests and fervently guard their eggs. They externally fertilize the eggs, guard them against threats, and aerate them using their tails. Fertilizing these eggs is a full-time duty. Therefore, they cannot leave their nest undefended. Consequently, they end up eating their own eggs to survive. But this may not always be the case. In fact, countless pet fish owners, despite feeding their fish, can’t help but scratch their heads because the eggs still get eaten.

Eggs are very fragile, and some may get damaged. Damaged eggs are also eaten by fish. Moreover, some fish eat the eggs in order to provide better oxygen to the remaining eggs. Other times, males go to great lengths to prevent other fish from preying on their eggs. They eat their own eggs as a last resort. Alternatively, other fish eat these eggs if they aren’t properly guarded.

Actually, external factors could lead to this behavior as well. That is, some things may cause a spill-over response that the fish have no control over. Spill-over responses are induced by external stimuli. This could include:

These are just a few factors that may make fishes anxious. Fishes are very sensitive to disturbances. Any of these factors are more than likely to trigger them. While most people don’t realize, these are the reasons their fish cannibalize in an aquarium/fish tank. This behavior is most common in angelfish and common goby but can be seen in various species across the board.

Can you Prevent Fish from Eating Their Own Eggs?

Yes, you can. If the reasons a fish may eat its own eggs are eliminated, the eggs stay healthy and develop safely. First off, when you are figuring out how to stop eggs from being eaten, you need to figure out the root cause. Chances are, your fish tank is placed somewhere prominent in your home. Unfortunately, there’s a lot of disturbance in these spots. It’s either kids poking the glass, or other people peeping into the tank. The fishes are very sensitive to these disturbances and will often eat their eggs as a result.

It’s better to place the male fish and the eggs it is fertilizing in a quiet spot. Some people have tried transferring the eggs through a dropper and placing them in ideal conditions for hatching. This is an extremely delicate procedure, and you will most likely fail. Therefore, it’s a much better idea to transfer the mother into another tank before it lays eggs. Place the whole tank in a bedroom, where there’s not a lot of noise of activity.

Moreover, keeping a variety of fishes in a tank can be detrimental to the survival of eggs. Different fish breeds may prey on other fish’s eggs. Therefore, keep your fish separate, especially if you have a small tank.

There are a few more tips you should follow:

Do fish eat their own fry? How to prevent this?

While it is not as common, sometimes fish even eat their fry. The reasons are more or less the same. The fry might be eaten in a community tank, where other fishes swim. Moreover, parents may eat their eggs under stressful conditions. Some fishes need a few spawning cycles to really figure out parenting and might eat their fry in the process.

There are a number of ways you can prevent this behavior. First off, you must realize separating fry from parents is the right thing to do if they are getting eaten. If they hatch in a community pool, then its best to remove the fry, so other fish won’t eat it. But, caring for them becomes more difficult. New hatchlings need a diet of newly hatched brine shrimp and micro-worms. A couple of weeks down the line, you should add crushed flake foods and eventually switch them to regular fish food.

If you choose to keep the fry in the same tank, you should make the tank safer for them. Here are a few suggestions:

This will greatly increase the chance of your fry living to see another day.

How to know the fish are ready for breeding?

In nature, fish have to deal with multiple threats. Therefore, they have evolved to become defensive and territorial. This behavior becomes even more apparent when a pair of fish matures. When a fry of breeding fish mature, they will become more aggressive towards other species. This is a sign they are ready for breeding. This behavior is very obvious in species such as the discus fish, but it applies to most species.

At this point, you should put the fish in a separate breeding tank. The tank should have a plain base and optimal breeding conditions. Also, the tank should be kept clean. Once the eggs have been laid, they will take 60 to 72 hours before they hatch. You don’t need to feed them as soon as they hatch. In fact, they can live off of secretion from their mothers for up to two days.

Is it random? Or specific eggs are eaten?

We have already discussed the numerous reasons why some fishes practice filial cannibalism. Researchers have conducted further research on this matter. Dr. Katja Heubel of Tübingen’s Institute of Evolution and Ecology analyzed the patterns of filial cannibalism. Their conclusions were quite interesting:

The findings of this research suggested that filial cannibalism was influenced by the behavior of the male fish, as well as how far the eggs have developed. It suggests that cannibalism is much more prevalent in males with higher activity levels. It also suggests that this is an adaptive behavior.

While it appears to be destructive behavior, it’s not. The males looking guarding the brood selectively eat their eggs, not randomly. In a prior study (Vallon & Heubel), the trend showed younger eggs being prone to cannibalism. That is, presumably, because younger eggs have lower reproductive value. This basically means younger eggs have not developed as much in comparison to older eggs. The chances of more developed eggs surviving are more likely than newer eggs.

But, the subsequent study suggests the age aspect can be overridden. It happens when older eggs have less reproductive value, despite their age. Mostly, these are eggs affected by mold or other infections. Fishes are also seen as eating eggs, surrounding the ones affected by water mold, as they may also be infected. This prevents the whole brood from being infected. Moreover, it gives the male fish more energy and better allocation of resources for the remaining eggs.

Lastly, the study isolates the consumption of infected or dead offspring, but there are various other factors influencing filial cannibalism. This conclusion also suggests that in the so-called “spill-over” response discussed above, fishes do have some level of control over their actions. Their eating patterns are not completely random but selective. As a result, filial cannibalism isn’t always counterproductive, but actually useful for the survival of the brood.

Other factors influencing this behavioral will most likely lead to different conclusions. One such factor, where fishes may eat their eggs for other reasons, is discussed below.

Fishes Eating their Eggs in Captivity

It is common knowledge that fishes are prone to eating their eggs a lot more if they are in captivity. Fishes weren’t evolved to be kept in bowls and tanks. While it’s amusing for us humans, captivity is unfortunate for fishes. These animals have evolved to swim in the seas and across the rivers.

Moreover, nature has devised better ways for them to survive and complete their lifecycles; from hatching to growing into adults and starting their own breeding cycle. Unfortunately, humans have greatly impacted the breeding process. Instead of having separate breeding grounds, the eggs are hatched in confined tanks, and often in community tanks. Next, instead of parents caring for their youngling, breeders are known to take away the fry and take care of them separately.

As a result, fishes in confinement have evolved with no parenting skills. This makes them unable to take care of their offspring. They either get overprotective, and eat their own eggs due to other fishes in the community tanks, or the plethora of reasons discussed above. This behavior can be seen in many species. Usually, fishes eat their eggs for a few breeding cycles until they eventually learn parenting skills.

Filial cannibalism and its implications in an ecological and evolutionary sense are further discussed in this research. The research also mentions that filial cannibalism has been reported in marine as well as freshwater fishes.

There are a few queries most people have about why some fish eat their own eggs. So, let’s discuss some of them useful for fish farmers, pet fish owners, as well as enthusiasts.

How long does it take for fish eggs to hatch in a tank?

Fish typically take two days up to a week to hatch. The time span can vary depending on the fish type as well as outside conditions. Eggs hatch in just a couple of days if they’re provided with ideal, warm water temperatures, plenty of oxygen, and other conditions needed for spawning. If the temperature is less warm, the eggs will take longer to develop. Regardless of the conditions, some eggs may take longer than even a week. Chances are that they are either unfertilized or early dead eggs.

Do fish die after they lay eggs?

How do you know if fish eggs are fertilized?

Fertilized eggs have a different appearance than unfertilized ones. The appearance may vary from one fish to another. For example:

Unfertilized eggs have a distinctive appearance. They usually develop a white opaque color. Their appearance is different due to the formation of fungus or mold. Mold or fungus build-up can be prevented if the water is kept very clean. Moreover, you can add shrimps in order to minimize mold from the tank, and eat only infected eggs.